With all the hype surrounding the FIFA World Cup being filmed in 3d for the first time this year, you might assume you’d be able to head to your local pub to see some 3d matches on its fancy new 3d TV screens.

Or even watch the games in 3d in the comfort of your own home, if you’ve been particularly quick off the mark to snap up your own 3d TV set.

But no. At a press conference today revealing FIFA and Sony’s stereo 3d plans for the World Cup, it became clear that, as the BBC and ITV is broadcasting the World Cup and not Sky, there’s going to be no 3d World Cup on TV in the UK. 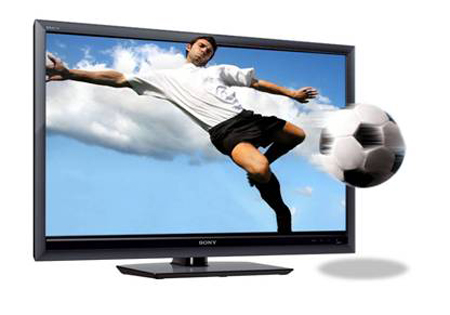 Instead, there will be “up to 50” UK cinemas screening some of the matches live in 3d. Which sounds pretty good until you find that none of them is an England match, that is until we (hopefully) get through to the Quarter finals and onwards through the tournament.

In truth, it’s all a little underwhelming.

ESPN in the US and Spanish broadcaster Sogecable are broadcasting 25 World Cup matches live to 3d TV sets around America and Spain, and FIFA is “expecting more” broadcasters to also provide a “3d home viewing experience”. Niclas Ericson, FIFA’s director of TV, estimates a global audience of “hopefully a few hundred thousand people” to watch each game live in 3d.

Seven camera positions will be used for the 3d filming at each of the 25 matches earmarked for 3d, says David Bush, director of marketing, Sony Professional, Europe. On top of this, some of the coverage from 2d cameras will be converted live to 3d to supplement this footage.

Three of the stereo 3d positions will be above pitch level. Two OB trucks, including the Sony-designed Telegenic stereo 3d truck, will cover 3d transmissions of the games, with Sony’s new stereo image processor (the MPE-200) used to auto-resolve imperfections in camera alignments and help ensure high quality 3d images.