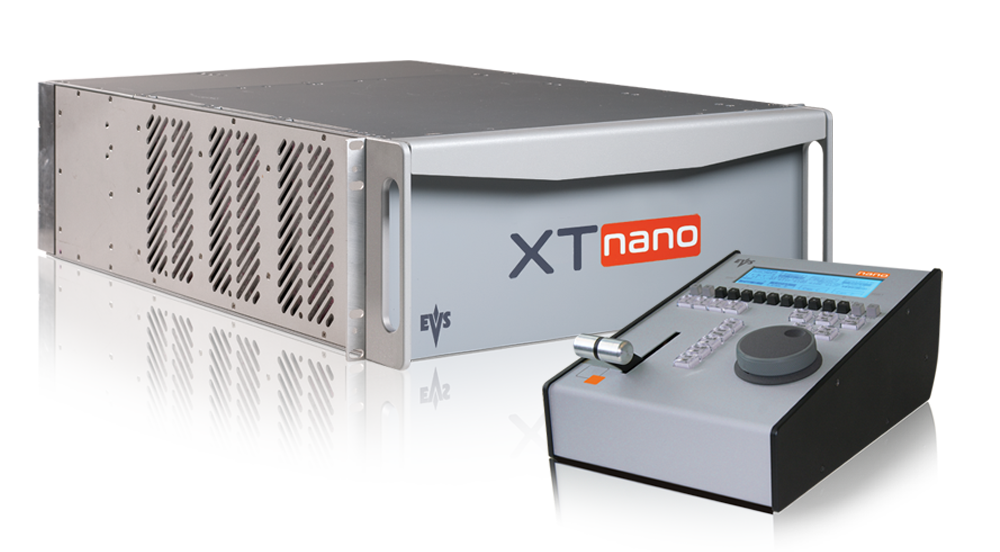 EVS launched a new, affordable, entry-level version of its server, the XTnano, for live slo-motion HD and SD instant replays. Developed for live broadcasts with medium and small sized OB productions, it is controlled by the Nano Remote, which has a jog knob, a T-bar and LCD display.

As well as live replays, the XTnano can be used for clipping and playlist creations. Transfers of footage can be made faster than real-time to removable media and Final Cut Pro.

The company also showcased its sports graphics system that integrates into its live slo-motion systems, enabling graphics and basic analysis functions to be overlayed over instant replays.

The system will be used in the FIFA World Cup to overlay graphics such as the offline position, the distance to goal and other graphic animations on the instant slo-mo replays. 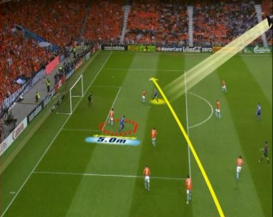 Orad has just launched its own EVS-competing slo-mo server the company says is around half the price of EVS’s servers. The Orad PlayMaker Slow Motion Video Server is an eight HD/SD channel device that can handle input from two super slo-mo cameras.

It has a smaller form-factor than EVS’s servers and is capable of working on stereo 3d live broadcasts. Orad’s device provides 120 hours of storage in SD or 60 hours in HD and is operated via a touch screen panel with programmable buttons to enable, for example, the tagging of fouls, offsides, corners etc, making it straightforward to sort the database according to this data.

Also competing with EVS, Orad showcased its PlayMaker Studio graphics overlays, which make it possible to create instant replays with on-screen details including distance from goal and offside.

On top of this, PlayMaker Studio’s impressive tracking function enables detailed cg analysis during half-time, full-time and summary highlights packages, using virtual players that look like the players on the pitch.

The type of cg highlights broadcasters can provide using PlayMaker Studio include detailed analysis of player and ball movements, both in 2d and stereo 3d. It is possible to do flow-motion analysis in tennis, for example, which creates still images of the player each time they hit the ball so you can see how far they have moved around the court for each shot.

Orad also premiered a beta version of a new interactive screen, designed for sports presenters to use as part of their live analysis of a game.

It is currently possible to draw movements on screen and control frame-by-frame video playback by sliding left and right on screen, and more. Orad expects the interactive screen technology to also be useful for coaching. 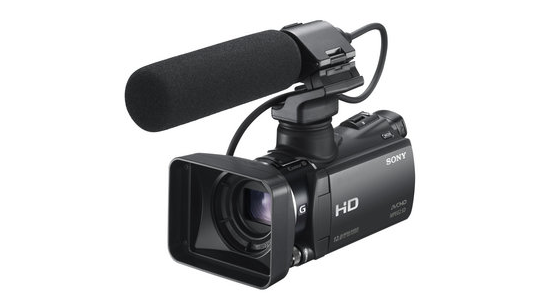 Taking up one of the largest floor spaces at the show, including a full-size OB truck, Sony’s product focus at NAB was dedicated both to new products and the company’s consultancy services, which were being heavily pushed.

New products include a petite entry-level file-based professional AVC HD camera, the HXR-MC50E, which is aimed at the corporate market and video bloggers. It’s designed to “combine the simplicity and useability of a traditional consumer camera with the picture quality and support of a professional camera.”

It has a smaller sensor compared to Sony’s higher-end studio cameras, so isn’t capable of the same picture quality, but is a fraction of the price at $12k, including an interchangeable lens. It will be available from October this year.

Towards the end of last year, Sony announced that owners of its flagship SRW-9000 SR camera would be given the option of migrating to a 35mm single PL mount sensor. This is now available as an irreversible upgrade at a conversion cost of $60k.

Outside of cameras, Sony showcased 24” and 42” 3d monitors and a new 7.4” LED field monitor, providing “very high contrast ratio” with no need for a backlight. It costs £2.5k-3k.

Rather than purely focusing on showcasing products, around a quarter of Sony’s stand was dedicated to its systems/IT consultancy, design and implementation wing, aimed at broadcasters, production and post production companies. Current clients for its systems design consultancy include Sky and, with its NAB presence, Sony is “looking to identify potential partners” for future work, says Bainbridge. 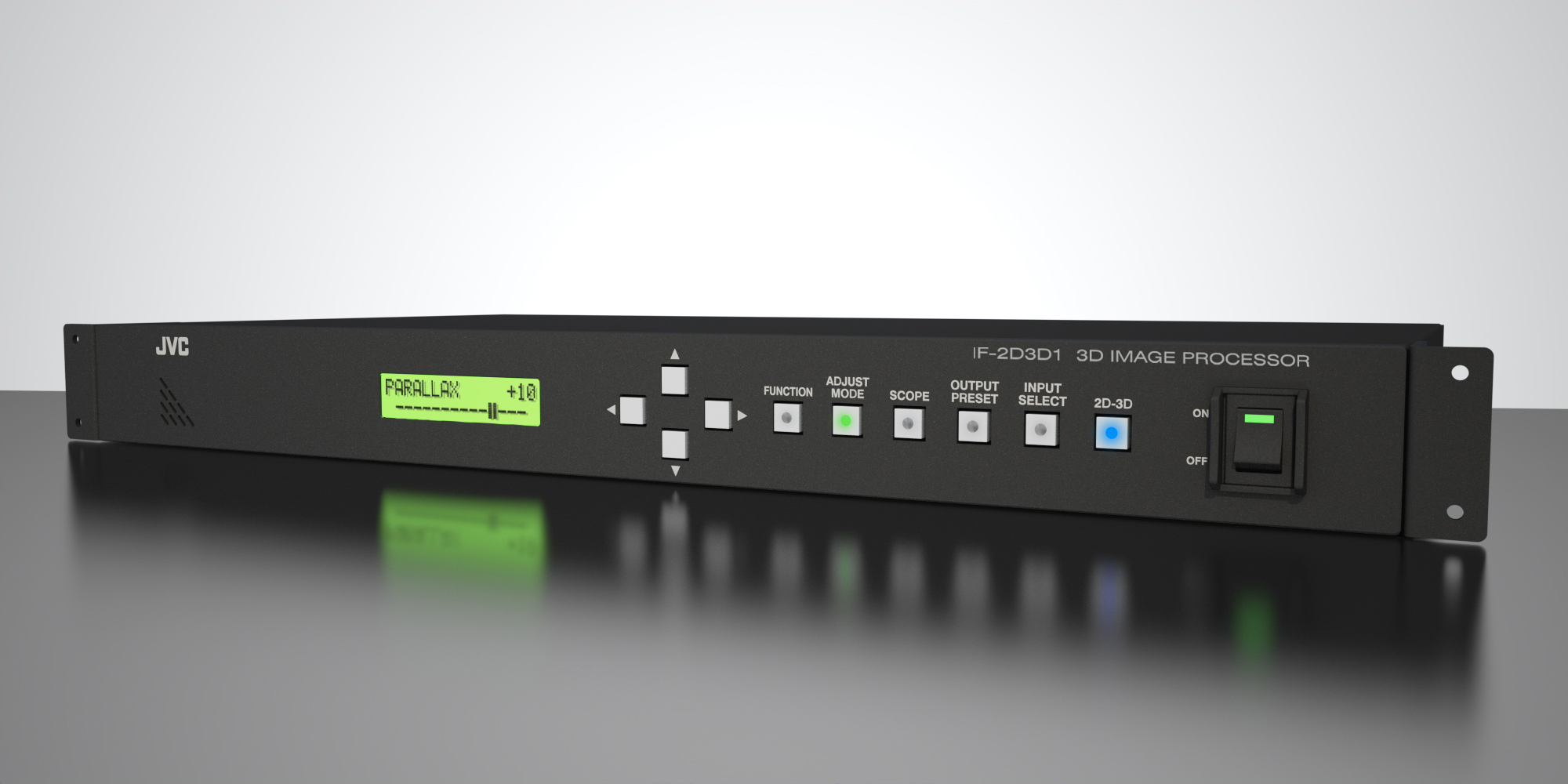 JVC looped an impressive 3d video of beautiful landscape photography to showcase the capabilities of its 2d-to-3d rack unit converter box, the IF-2D3D1. The device, which costs $30k, looks at the contrast, colour and depth cues your eyes see and runs through 2d footage, turning it into stereoscopic 3d.

David N. Walton, assistant vice president, marketing communications, JVC, says it can be used for 2d-to-3d conversion on live events, as it only has a latency of less than two frames. He added, though, that it’s “going to have some errors, and isn’t a magic box to provide perfect problem-free 3d.”

Walton says, following the development of prototype models prior to launch, “The firmware has been improved dramatically up to launch and there are manual controls on the box to adapt the output to get it right."

Also centred on 3d, with a decade’s worth of working in stereo, SENSIO used NAB to promote its SENSIO3D 3d ‘virtually lossless’ delivery technology, which squeezes the left and right eye into one to enable distribution of 3d content through conventional 2d broadcast channels networks.

The company has two main targets for SENSIO3D; firstly, the consumer market, with VoD and pay-per-view being “very well suited for stereo, with lots of movies and premium events,” says Nicholas Routhier, president and CEO.

The other is the theatrical/”out of home” market. Routhier says SENSIO has worked on 20 events in 3d since last year, with clients including the NBA. It has also recently teamed up with 3d live events company Aruna Media for the delivery of the World Cup in 3d to cinemas and stadiums worldwide. 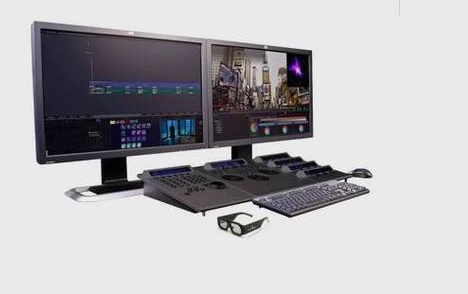 Having made major inroads into the stereo 3d finishing market over the last six months, with sales to Framestore and Sky, SGO concentrated on stereo 3d enhancements for the latest 5.0 release of its Mistika system.

The update is based on feedback from customers, and makes the tools more familiar and logical, as well as introducing a set of new tools.

The new tools include refined options for controlling convergence, enabling images from the left and right cameras to be properly aligned and made identical size in post.

There’s a new tool for adapting inter-ocular distance, making it possible to artificially change the position of the cameras if they are too far apart. This can make images easier to view even when they aren’t necessary badly shot.

Another new feature is the addition of vectorscopes for colour monitoring, which make it much more straightforward to colour-match the left and right images.

SGO also used NAB to demo a live stereo 3d feed to Mistika, which is aimed at checking and testing everything is set up correctly prior to the shoot, and avoiding having to correct so much in post.

After 15 years on the market, Snell’s restoration tool Archangel has finally gone high def. The updated real-time defect-remover, which takes out 80% of defects such as dirt, dust, film weave, scratches and grain, has, since its inception, been limited to SD content, but is now capable of the real-time restoration of HD images.

The new Archangel is being launched at a lower price than its predecessor and, as well as coping with higher res images, has an improved interface and filters. “If you’re working on full length feature restorations, the Archangel will pay for itself in five jobs,” says a Snell spokeswoman. 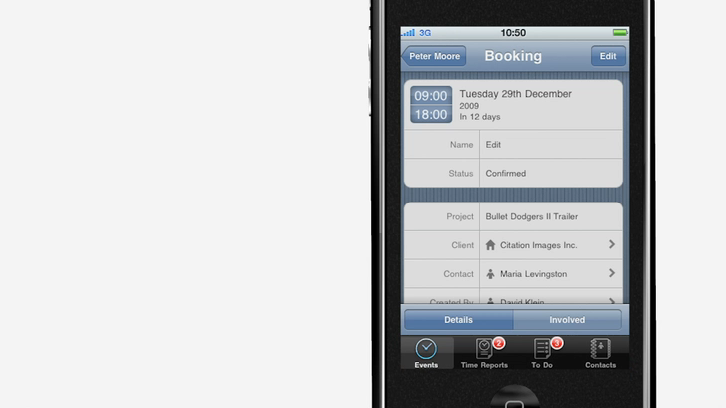 The slick-looking iPhone interface enables a producer to check and add bookings, view ‘To Do’ tasks, assign notes and check the schedules of the people in their facility, seeing live what’s happening at the facility. The app also provides access to the facility’s Farmer’s Wife contact database while on the move.

It is also possible to view and update live information on a production’s budget using an iPhone or iPad on location, so you know on the day precisely where a project is at in terms of its budget.

The iPhone app is available for free for those on a service and maintenance agreement with Farmer’s Wife, and those buying new Farmer’s Wife systems. Simon Hadfield, md, Farmer’s Wife, LA, says a system for the average sized UK post house costs around £7.5k, including the iPhone app.