The facilities pages (p.16/17) in the April issue of Televisual includes a short comment from Helen Stanley, Framestore’s md of commercials, about whether post companies should become production companies. 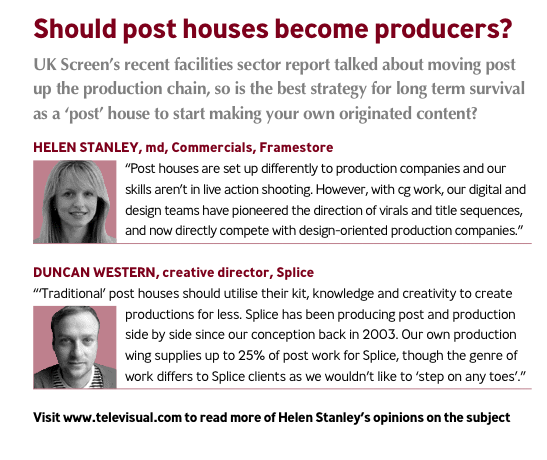 Helen provided more copy than we were able to include in the magazine, due to space limitations. The rest of her copy provided interesting reading, so here’s the full transcript of Helen’s comment:

“Post companies are set up differently to production companies. Our skill sets aren’t in live action shooting, especially those high end beauty, comedy, drama or action sequences…. and we underestimate this at our peril!

However, straight cgi commercials and those with cgi characters performing over live action plates, are both areas where Framestore has been working successfully for some years.

Our main competitors here being traditional animation houses who have diversified to house their own cgi teams.

Computer animation is Framestore’s strength and, like the traditional houses, a number of our key animators know how to tell an animation story and we have executed a number of spots in this genre.

Our digital and design teams have pioneered the direction of both virals and title sequences for a number of years, and are now directly competing with design oriented production companies.

In the States, where the post companies have directed cgi/vfx heavy spots since the early 90s, there has never been an issue with their storytelling (maybe Pixar helped with that) and Framestore NY has directed many excellent spots since its inception.”