Features & Opinion06.02.18
Behind the scenes on Discovery's Slider

Ed Sayer, Head of Original Commissioning, Discovery Networks International explains how Discovery and indie Betty came up with new show Slider, in which a trio of disabled athletes train in winter sports events for the first time and take on the seasoned Olympians at their own game.

“The first thing I quickly learnt about Discovery when I first arrived just over 2 years ago is that the company doesn’t do anything by halves.  When President and CEO David Zaslav announced that we had secured the rights to the Olympic Games in Europe over the coming decade, I realised that this was a key point in our company’s history.  Soon enough the content strategy started to come together, across Discovery’s wide portfolio of channels and for every screen, for our first Games – the Olympic Winter Games PyeongChang 2018, South Korea.  Integral to our strategy was the build-up to the Games and we needed support programming that would engage viewers early and rollout across our European networks and digital platforms.

Discovery has committed to bringing the Olympic Winter Games to more people, on more screens than ever before – particularly engaging new and younger audiences with the Games.  With this in mind, the main driver for this specially commissioned support content was not only to engender excitement with existing Olympic Games fans but also to try and capture a new audience who might not necessarily be winter sports aficionados.  All we needed now was the right idea.

The initial spark of a concept came unexpectedly from a conversation I had with a production partner in a pub.  He had become obsessed with an idea about creating a ‘bionic’ sports event – he was convinced that this was going to be the future for sport in about 50 years or so.  I wasn’t so sure.

However, I did think the central question that bionics posed was very intriguing.  What does it mean to be an Olympian – is it about obtaining biological physical perfection, the perfect human body, or is there something else at play?  One often hears about the ‘Olympic Spirit’ – could we bottle it for the purpose of our project?   So taking these questions we thought about whether we could create a ‘Bionic’ Winter Sports athlete.  Winter sports are full of elements our viewers love – technology, genuine life threatening jeopardy and larger than life characters, so it seemed the perfect backdrop for a story.

Working with legendary Betty exec producer Dave Harrison, we cooked up a series idea where a trio of disabled athletes would take on able bodied athletes at Herculean tasks, except they would have the leveller of body modifications.  I immediately put the idea into paid development – first questions to be answered: who would our cast of disabled athletes be and what events could they credibly challenge able-bodied athletes at with never-attempted-before body modifications?

The team at Betty worked tirelessly in those first few months, filming and interviewing dozens of disabled athletes and engineers to find our perfect cast.  Micky Yule was the perfect fit – a Paralympian and then an Invictus game winner, whose tireless enthusiasm for life and for competition was just begging to be captured on camera.  He was joined by Mike Goody and Will Swift – both disabled and each involved in the world of Paralympic sports and prosthetic design respectively. We had kept to the golden rule of three – every producer worth their salt knows that three is the perfect number when it comes to onscreen talent.

Back at Discovery HQ I had a lot of support from senior management for this leftfield idea – JB Perrette and Susanna Dinnage loved the scale and ambition and allowed it to move into commission, although not with the original series idea, it was too rich. What started out as a factual entertainment series idea evolved into a feature-length documentary.  It also turned out to be a more ambitious project than any of us first envisaged.

Micky was going to train to become a skeleton athlete and take on the world champion ‘Slider’ Martins Dukurs in a one on one race.  Skeleton, for the uninitiated, is the winter sport of Luge but performed lying down face first whilst hurtling down a bobsleigh run.  Olympic Games hopefuls have died on the Luge.  As frightening a prospect as that was, we felt that the basic premise was achievable – and what better way to engage viewers into understanding the difficulties of a little understood but infamous winter sport? 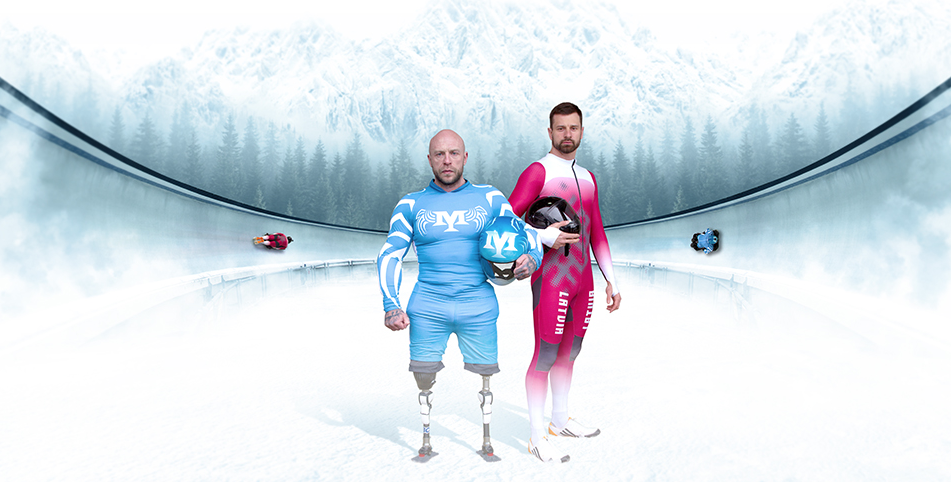 The scale of the challenge was summed up perfectly by one of our on screen experts, Dr. Kristan Bromley, who in the film goes on to build Micky Yule’s sled for us.  “What we’re trying to do here, to take an analogy, is take someone who can’t drive a car, put them into an F1 car, teach them to drive on an F1 track and ultimately a week later have them race against one of the best drivers in the world.”

Like any film the key to the success was going to be the Director and we had one of the best:  Tom Peppiatt.  I knew Tom from my old ITV days – and his eye for detail mixed with a fantastic personal skill set made him my number one choice.  Not only did he have to capture all the action in a very short period of time, he also had to deal with three novice presenters all of whom became increasingly more terrified as the project went on and the reality of the task set in.

The producing challenge for this was one of the most complicated my team has ever had to deal with – filming around the world, battling against a slipping schedule and limited snowfall.  Our brilliant Channel Exec Victoria Noble was on the phone nearly every day through production with show runner Martin Turner and there wasn’t a problem that they couldn’t overcome.

The end result is a film that we can all, I think, be enormously proud of.  What I particularly like about it is that I hope it challenges people’s perception of Discovery.  It is a show that I think in today’s fragmented broadcasting world only Discovery would fully commission. It demonstrates that we are far more than a network that relies on men with beards, fast cars and gold.  Although we’re good for that too.”