Twenty-part BBC1 drama Dickensian is the most complex show Red Planet boss Tony Jordan has taken on to date.

“Every decent show I have been involved with has always been difficult for people to get their head around,” says Tony Jordan, the writer and producer of series such as time-travel cop show Life on Mars and ‘long-con’ drama Hustle.

Jordan is sitting in a smart hotel room in Cannes, where he is selling his latest project, Dickensian, to international buyers at the Mipcom programme market. And it’s clear he’s having some trouble explaining the show’s premise to them. “I’ve got a huge wall to break down. Not a bad wall, just a wall…” Buyers assume he has adapted each of Dickens’ books side by side, and this is just another in a long, long line of adaptations of the author’s work. “But it’s not that,” says Jordan, “It is in no way an adaptation.”

What Jordan has done instead is to take some of Dickens most iconic characters, including Scrooge, Fagin and Miss Havisham, and mix them together in the same place, creating backstories and new narratives for them. “I’ve entwined them and meshed them all up to create something unique,” says Jordan.

Like many classic TV dramas, it’s based around a precinct – in this case a few streets in 19th Century London, where the Old Curiosity Shop sits next door to The Three Cripples Pub, and Fagin’s den is hidden down a murky alley. 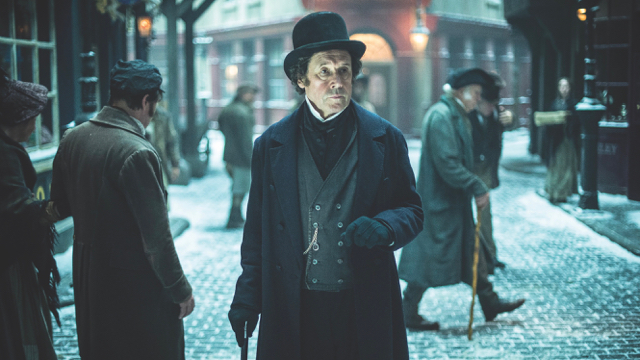 Given his background as lead writer on EastEnders, Jordan’s 20×30-min project has been described as a soap-like take on Dickens. But it is a description he bridles at. “I hear that soap thing a lot, but it couldn’t be further from the truth.” Soaps, he points out, have to be contemporary because they reflect the way we live now. “A period drama can’t be a soap,” he says.

However, Jordan reckons his background makes him “perfect” for this project. He left school with no qualifications and famously began his career as a market trader, only starting to write in his early 30s. “Charles Dickens had more talent in his little finger than I have in my entire body…but I am perfect for this because I have an irreverence for the material. I’m not an academic…I didn’t study or do English literature…so it means I don’t feel I have to stick to the letter of Dickens in a way that some others might.”

Likewise, viewers, he says, won’t need to have read a single word of Dickens to enjoy the series.

However, Jordan says he sought to engage with Dickens experts early on in the project’s life, in a bid to assuage fears at any liberties being taken – and he clearly believes he has won them over. The reason, he says, is that the characters remain faithful to those that Dickens created: “Scrooge isn’t gay, Mrs Gamp hasn’t got one leg. Why would I change them? The purpose of doing this is because those characters are so great.” 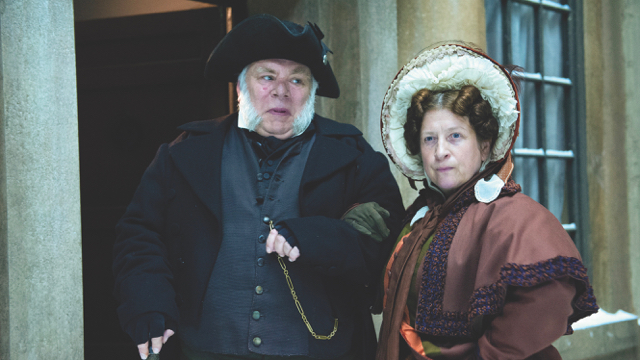 The origins of Dickensian go back several years to an end of series dinner for Hustle, when Jordan first mentioned the project to former BBC head of independent drama Polly Hill. Jordan worried that it would be too expensive for the BBC, but Hill and former BBC1 controller Danny Cohen backed it. The £12m budget was then raised with the help of an advance from BBC Worldwide.

With the budget in place, one of the key first decisions was where and how to film Dickensian. Jordan says that the weather is a crucial element of Dickens’ story telling – he uses mist, snow and dark nights “as another character.” But that’s a problem for drama shoots. “You know what it is like in modern day filming – just trying to get a night shoot is a nightmare…”, says Jordan. “The more I thought about it, the more I knew we’d have to build the world.”

This is exactly what production designer Michael Ralph has done, creating a specially-built indoor set in West London. It comprises 27 two-storey Victorian buildings set around cobbled streets. “It was built so it could have horses and carriages going round it. It’s amazing, like Harry Potter world,” says Jordan.

Jordan’s Red Planet, meanwhile, is busy on other projects such as Sky1 adventure series Hooten & The Lady and BBC1 musical drama Stop! In The Name Of Love. The indie is clearly benefitting from the rising global demand for original drama, which Jordan says helps to define networks at a time when a growing number of platforms like Amazon, Netflix and Sky are trying to stand out.”The thing with drama is that it sticks. Drama can define a network in a way that nothing else can,” he says, citing the impact of House of Cards on Netflix. “So everybody is running around looking for their benchmark drama, and luckily for Red Planet that is what we make.”

Still, he has no plans to sell Red Planet, one of the few remaining drama indies in an ever more consolidated production market. “I love the fact that we are completely independent. I have no boss, nobody can phone me and tell me what we should or shouldn’t do. And I like that.”

CV
– Tony Jordan started his writing career at 32 when he submitted an unsolicited script to the BBC. He became a scriptwriter for EastEnders, writing almost 200 episodes.

– He went on to create acclaimed dramas such as Hustle, and co-created Life on Mars.

– Jordan set up Red Planet Pictures in 2005 as a writer-led drama production company.

– Red Planet’s first commission was Holby Blue, and it has since gone on to make Echo Beach and Moving Wallpaper, The Nativity, The Passing Bells and The Ark.

– Red Planet is now making a fifth series of Death In Paradise, new action adventure series Hooten and the Lady for Sky1, and BBC1 musical drama Stop! In The Name Of Love.