Hot on the heels of Mipcom, this year’s Factual Festival looks at How To Grow Your Business Overseas, in a session chaired by managing director of Sky Vision Jane Millichip.

To find out more and to book tickets, go to www.televisual.com/Festival

The session takes place on Tuesday 14th November at BAFTA, on the first day of the two-day event. David Flynn, co-founder of Youngest Media and recently-appointed by PACT as an industry export ambassador, will explain how and why he has launched an indie as a global company from day one. Roy Ackerman, director of International Strategy for Zinc Media and md, Films of Record, reveals how he plans to accelerate Zinc’s business in the US and the wider global market. While Nutopia chief operating officer Helena Tait will talk about how Nutopia has nearly doubled turnover to £21.7m following a slew of big commissions from international broadcasters.

As part of a programme packed full of inspirational and informative sessions, the top TV commissioners in Specialist Factual, Documentary and Factual Entertainment will be speaking at the Festival, giving up to the minute insight into their present and future slates and to look at how successful commissions on their channel have made the journey from inbox to the screen.

Among the many highlights, Facebook’s Glenn Miller, head of entertainment media partnerships, EMEA will talk about reaching a new generation of viewers and the thinking behind its new TV service Facebook Watch. He is joined by Kat Hebden, head of digital, Fremantle Media UK, who will be addressing significant changes to the language of TV and how factual producers can use social media, together with Vice UK digital programming executive Eloise King and Derren Lawford, creative director, Woodcut Media.

The BBC’s controller of Factual Commissioning Alison Kirkham will discuss the future of factual at the broadcaster with Julian Bellamy, md of ITV Studios. 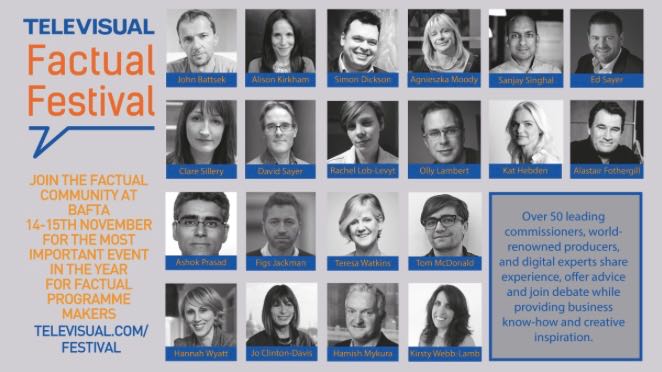 Tuesday morning is a chance to flex development muscles, with a Development Masterclass hearing from four of the best in the business, following a conversation between Studio Lambert ceo Stephen Lambert and presenter and producer Anna Richardson about creating world-beating formats, as Studio Lambert approaches its tenth anniversary.

World-renowned producer John Battsek will talk about Creating Compelling Stories in documentary, using dramatic technique. He will be on stage with 24 Hours in Custody mastermind Simon Ford, in a session chaired by Kudos chief executive Diederick Santer.

Top names in factual will debate how producers should handle the power that they hold in their hands, in an age of fake news and viral video, in a session chaired by author and broadcaster Grace Dent, the creator of Radio 4’s The Untold. Dorothy Byrne, head of News and Current Affairs at Channel 4 and young film-maker Rachel Lob-Levyt are joined by Alastair Fothergill, md of Silverback Films and Will Anderson, creative director, Keo Film, both with major upcoming campaigning films, for Netflix and the BBC

This year is also the first time at the Festival that delegates will hear from the heads of Daytime commissioning, at the BBC and Channel 4. Dan McGolpin and David Sayer will be talking about what they look for in shows that play well for them in daytime and early-peak.

Plus there are sessions on VR, AR and AI, and how to adapt to a new generation of TV watching. Creative Europe will present its funding opportunities.

There will also be the opportunity to book one-to-one meetings with commissioners. Broadcasters already confirmed to be part of the Festival include the BBC, Channel 4, Channel 5, UKTV, ITV, Discovery, A+E and National Geographic.

To find out more and to book tickets, go to www.televisual.com/Festival.