From cameras to editing, 4K and VR, Televisual’s annual Production Technology Survey reveals the kit that producers are using to make their shows and what they think of it.

Keeping on top of advances in production technology is one of the big challenges for programme makers today.

New cameras, editing kit and supporting technology are launched into the market each year, promising to enhance creative possibilities, bring down costs or boost productivity.

Televisual’s Production Technology Survey attempts to cut through this hype, asking our readers to tell us what they are using to make their shows –and which kit they rate.

The Survey seeks to establish which are the most popular technology brands and models in production today, as well as highlighting the key technology trends that are driving the market such as 4K, virtual reality and HDR.

As with previous Production Technology Surveys, we have focused on a number of key areas. On the first two pages, we take the temperature of the rapidly evolving camera market, revealing the most popular cameras  and manufacturers.

Once again, Canon’s C300 (pictured above) emerges as the most popular model – although it looks set to be eclipsed by the Sony FS7 next year.

Next we focus on the take on 4K and HDR. Despite all the talk about 4K, only 48% said they  had shot in the format in the past year. But its uptake looks assured: the majority of respondents think it will be commonplace in the home in 3-4 years.

We also look at virtual reality. Just 13% have produced a VR project, mainly to test the technology. However,  33% are thinking of producing a VR project, suggesting that there is growing appetite to experiment with the format.

The most popular camera models
The Canon C300, used widely across factual shows, is once again the most used camera model, with 25% of respondents saying they worked with it in the past 12 months.

However, the long popularity of the C300 looks to be waning. Sony’s FS7, the second most used model in the past year, is likely to eclipse the C300 next year. It is the camera that most respondents say they hope to use in the next 12 months, with 22% of the vote versus Canon’s 12%.

The Arri Alexa remains popular with programme makers in drama, film and commercials, with 12% saying it is their most used camera. This is up from 7% last year. It’s popularity looks set to be bolstered by the Alexa Mini next year. The Arri Amira is also making headway, largely in the docs market, with 6% saying it’s the camera they most hope to use next year.

The most popular camera brands
Sony has overtaken Canon as the most used camera brand in the 2016 Production Technology Survey.

38% of respondents said Sony is the camera brand they have used most in the past 12 months – up from 31% last year.

This 7% surge has helped the manufacturer move past Canon, which took 35% of the vote – down from last year’s 38%. 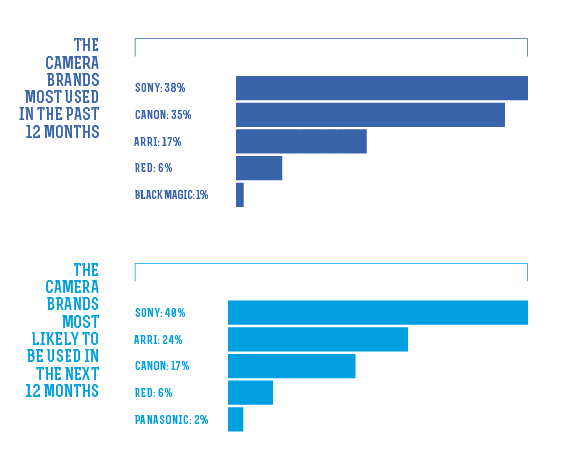 The growth in popularity of the FS7 and F5/55 has helped push Sony up the rankings. Sony also offers a wider range of cameras in the professional market, with cameas such as the PMW200 and PMW700 also popular choices.

Next year, Sony looks set to increase its lead, while Canon falls back further. 40% say Sony is the brand they most hope to use, against 17% for Canon – which is pushed back into third place by Arri on 24%.

Arri’s performance is bolstered by its popular and growing range of cameras, including the Alexa, Amira and Alexa Mini.

In the past year, Arri has pushed ahead of Red – a manufacturer it tied with in popularity in last year’s survey.  Last year both received 7% of the vote in the most used camera brand category; now Arri is ahead on 17% while Red remains about steady with 6%.

4K/HDR
Shooting in 4K is starting to pick up now. 48% of respondents said they had shot in the format over the past 12 months, up from 30% in last year’s survey.

Many are filming in 4K to future-proof their productions or because they want to achieve the best quality visuals possible for a high-end doc, drama, commercial or film.  Other reasons given for shooting in 4K are the greater flexibility it gives in the edit in terms of cropping, re-framing, grading and vfx. 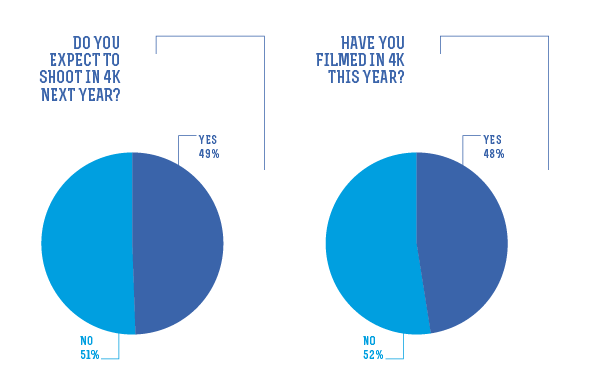 The 4K era also seems to be getting closer. The majority think it will be 3-4 years before 4K is commonplace in the home; last year, most respondents said it would be 5-6 years. Many commentators say that HDR is more likely to take off than 4K, given the smaller bandwidth required to deliver an enhanced quality of picture. 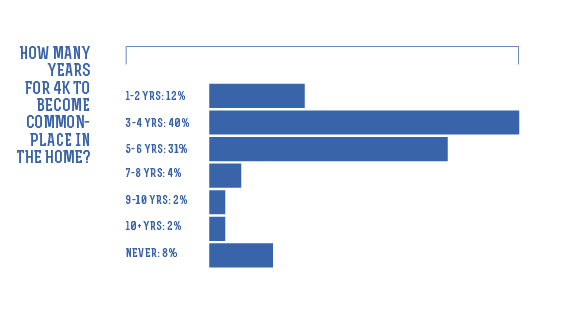 But despite all the talk about HDR, many (42%) have not even seen it. In fact, only 7% of repsondents have been asked to deliver in HDR. Those who have worked in the format, though, are big fans and believe that it is more likely to take off in the home than 4K.

Virtual reality
Virtual reality is still very much a fledgling business, yet a surprising number of respondents (13%) say they have produced VR content.

Most, however, have done so to test the technology, particularly with short films to experiment with workflow. Real VR projects included a UN film for the Paris Climate Summit, an immersive experience for a museum and a film for Google. 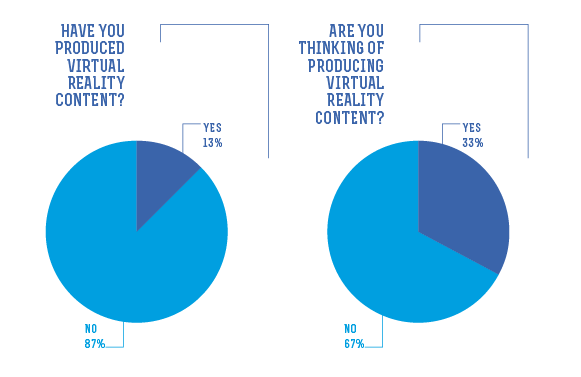 An impressive 33% say they are thinking of producing in VR, with many describing it as an exciting format. Others dismiss it as a ‘fad’.

It’s important to distinguish here between true virtual reality and 360 degree shooting. Many say they have shot 360 projects, using GoPros, rather than full immersive viritual reality.

Editing
Once again, Avid emerges as the most popular editing system in production. 60% of respondents saying that Media Composer is their primary editing system – up on last year’s 48%.

Avid of course has a strong legacy of support in post production. “The best editors use this and refuse to work on any other systems,” says one. “It is the most widely available in the post houses I use,” adds another respondent. 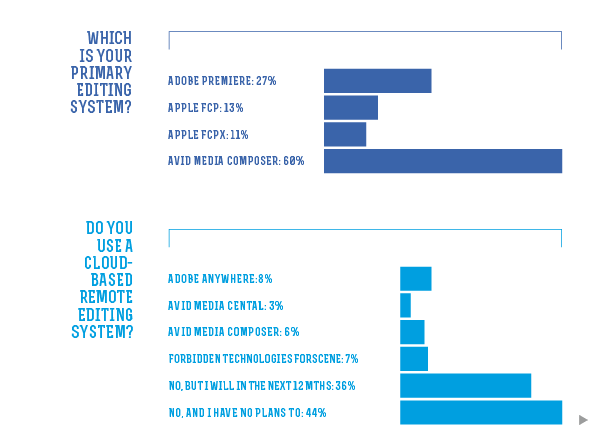 (Note: respondents could vote for more than one editing system, so the combined totals equal more than 100%).

One of the startling aspects of last year’s survey was the rise of Adobe Premiere. Its growth seems to have levelled off, dropping back to 27% from 31% last year. However, the editing software has developed a strong market in the corporate, digital and commercials world.

Adobe Premiere’s integration with Creative Suite and After Effects is important to many, and it has now become standard at many indies.

It’s rated for its value for money and ease of workflow. One corporate producer says: “It has wide compatibility with video files and most editors now use it which makes moving projects around between freelancers easier.” Apple’s editing software, meanwhile, is used by many for short edits and home use.

The ability to edit remotely is becoming ever more possible, yet very few programme makers have either done it or even plan to. Some 44% said they had no plans to edit remotely.

However, 36% said they had not yet opted for remote editing, yet planned to in the next 12 months. Of the technologies available, the most popular to date is Adobe Anywhere, followed by Forbidden Technologies’s Forscene.

Grading
DaVinci Resolve emerges as the most used standalone grading system with 36% saying they employed it, while FilmLight Baselight followed with 25% – signficantly up on last year’s 14%.
Many respondents say they grade using plug-ins or tools within their editing systems, reflecting the move by manufacturers to add more grading tools to their editing systems.

Media recorders
Love them or loathe them, third-party media recorders have been a fact of life for professional camera users since tapeless workflows became the norm.

24% of our survey respondents said they used media recorders with their cameras.

A range of recorders are now available to support professional digital cameras. Many of these were cited, from manufacturers including Atomos (Samurai, Shogun, Ninja)  AJA, Convergent Design (Odyssey 7Q), Video Devices (PIX-E).

How it works
Televisual asked senior programme makers – executive producers, series producers, producers, heads of production, line producers and directors – for their thoughts and opinions on the technology they use to make their programmes.

We had 116 in depth responses in total.  The majority – 53% – worked in factual TV production. 15% worked in entertainment TV, 9% in drama and 5% in TV sports and events. Meanwhile, 26% were employed in corporate production, 17% in commercials and 6% in film.

All worked in senior roles in production companies. Over 50% told us they had full control over choice of technology workflows and budgets.