If you want to earn good money in broadcasting and production, it helps if you are a man over 40 who works in London in commercials or independent TV. Televisual’s 21st annual Salary Survey reveals – once again – significant disparity in pay depending on gender, geography and genres.

For an industry that prides itself on being liberal and open, it is genuinely shocking to learn that men continue to earn more than women, bringing home a median salary of £50k versus £37.5k respectively (see separate story).

This is the case right across the spectrum, with Salary Survey figures showing that men tend to earn more than women in similar jobs as diverse as assistant producer, editors, production managers, producer directors, producers and series producers.

Workers in London also earn more than their counterparts in the nations and regions. The median pay in London is £47.4k, while in Manchester it is £35.8k and £45k in Bristol and Glasgow. Perhaps less surprisingly, pay increases with experience, with median salaries crossing the £60k mark once people are in their 40s. 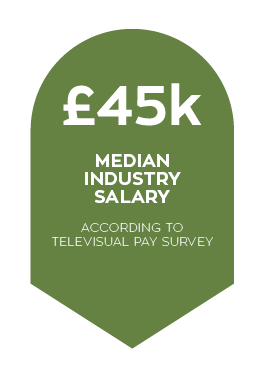 On a positive note, the median salary for people working in this industry is £45k, significantly above the national median wage of £27.5k. A majority of respondents also say that their pay has gone up in the past year, with 47% saying their salaries have risen, compared to 38% saying they have stayed the same and 15% reporting a decline.

Many report that the industry is busy, with plenty of shows in production helping to support levels of pay. One drama editor on £55k says: “Not only did I work more weeks last year, but my rate was marginally up too.” 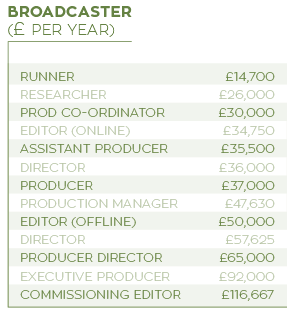 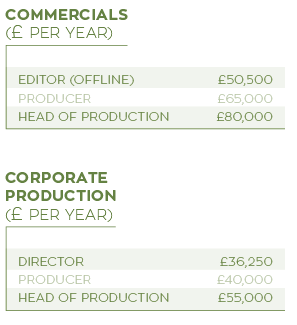 Despite a widespread perception that both budgets and wages are decreasing, one reality TV producer says he was surprised that after ten years in the industry he was ‘finally able to force an increase in my rate.”

That said, such positive feedback to the Salary Survey is few and far between. Most commentary focuses on four concerns; flatlining wages; the salary gap between those at the top and the bottom of the industry; the imbalance between male vs. female pay; and working conditions that mean long hours but no overtime.

The long hours culture of the industry is regularly commented on, with many complaining that this is effectively driving down their real rates of pay. “There is no work life balance and we are all having to work evenings, weekends and Bank Holidays regularly for no extra pay,” say one researcher on £22k who accuses indies of ‘continuing to exploit workers.’

An edit producer who earned £55k last year says: “The level of work expected and the amount of hours put in are definitely not reflected in our wages. You don’t get over time or sick pay. As an experienced producer who’s now worked in TV for over 13 years I think pay has risen very little. You constantly have to fight for your rate.”

An AP on £29k has his own take on the root cause of the overtime culture in TV: “The absolute biggest problem is the phrase “That’s just telly though” being used to excuse every exploitation. There’s a Grapes of Wrath type mentality in the industry that needs to change; the mentality that it’s such a sought after industry to work in and if you don’t do it there’s always someone who will do it for cheaper”.

Many also say there is a kind of stigma attached to asking for what you’re worth – particularly for overtime. Says one freelance editor: “Everyone expects you will sit in the edit until 2am because you ‘love your job.’”

Many complain of the discrepancy in pay between production staff and unionised technical jobs in cameras and sound. A production co-ordinator on £26k says. “Production staff are incredibly underpaid, undervalued and overworked compared to the ‘technical’ jobs in the industry. Many colleagues like myself are jaded and looking to get out of the industry to do something that gives us more money or time to live our lives.”

Many contributors to the survey report that their pay has flatlined in recent years, blaming static or falling programme budgets. “Production managers and executives are using the ‘low budget’ excuse to increase hours and keep pay low,” says one researcher. “Salaries seem to have stayed the same for 10 years for most roles, but the workload has increased with budgets getting smaller but content ambitions getting bigger,” explains a production manager.

In effect, this means a pay cut because of rises in the cost of living, with many contributors pointing out that their wages are down 15-25% in real terms. “My rate has remained static for three years and I have to fight for every contract,” says one series producer on £54k. 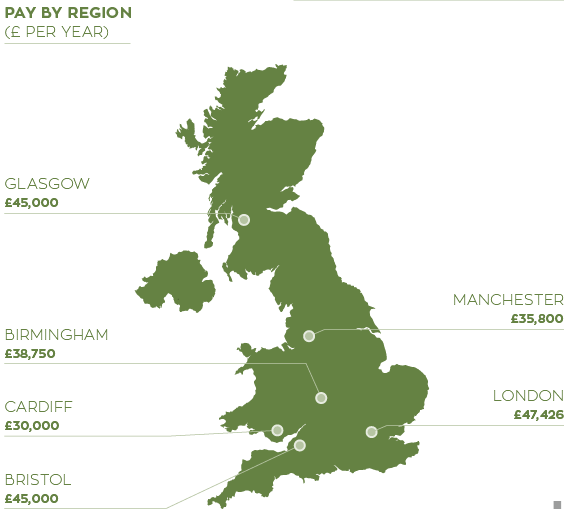 Notably, the Salary Survey has plenty of comments from freelancers working in the Bristol TV industry who complain that the market has been ‘all but stagnant for a number of years now’ with the BBC in particular seen to be imposing unofficial rate caps and refusing to negotiate on rates.

Indeed, there is widespread anxiety among Salary Survey participants about what exactly they should charge, in the absence on any commonly agreed standards. Greater transparency on rates is needed, argues an AP. “It feels like they are determined by production managers whispering to each other. There needs to be some sort of routine and authoritative third party clarification of going rates, to take the power out of management’s hands. I wish Bectu were more proactive on this front.”

There is also plenty of commentary about the disparity in pay between those at the top and bottom of the career ladders.

One md (on £100k) of an indie making high volume series for the BBC and ITV acknowledges: “Creatives are being squeezed the most with falling budgets. The only way for us to make things work is to pay management less.” Adds another head of production (on £100k): “There are a lot of people at the top making huge sums and yet the people at the bottom still slog it out on £25-30k for many years. I’d like to see average junior wages rise.” Many argue junior staff are the ones taking the hit for programme budget falls – while those at the top and particularly talent are protected. 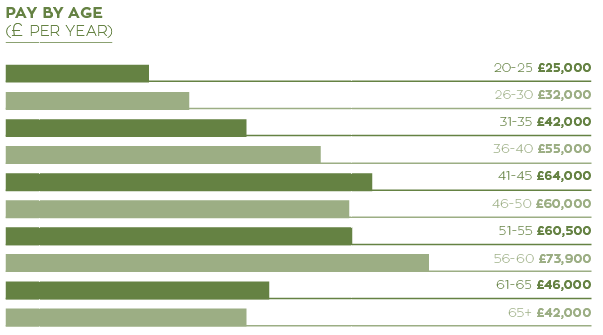 Indeed, running throughout much of the commentary is a general exasperation at some people’s treatment at the hands of some companies in production. One edit assistant at a TV indie describes the predicament facing many junior staff well: “I’m in a fortunate position to have been able to turn down jobs for the following reasons: 1. ‘We don’t do lunch. A runner will bring lunch at your desk’. 2. ‘You’re paid until midnight, but we expect you to stay until the work is done, which may be 7am’. 3. Contracts that pay 45 hours, but include an Opt Out of the EU Working Time Directive. 4. Jobs with OK salaries, but on a “Freelance” (0 hours basis), with no guarantee of work.”

How the Salary Survey works
Televisual emailed readers asking them to respond anonymously to our online salary survey. We asked what they were paid in 2015, and details about their age, gender and job. We had 717 responses in all.

The annual figures quoted in the article are based on median earnings. The survey skews towards Televisual’s readership, which tends to reflect more senior levels of the business. Respondents had a median age of 36. 57% were male, and 43% female. 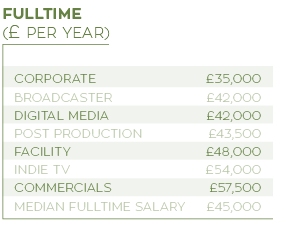 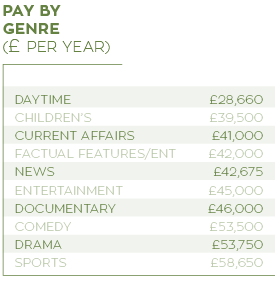 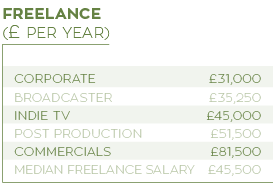