Robin Doelly began his career as a colourist at Rushes and, having worked in several Soho post facilities, now freelances at Fifty Fifty Post among other facilities in London. He has built up a wealth of experience on a broad range of projects covering broadcast docs, commercials and feature films. Robin is also an editor and compositor with credits for Harry Potter as well as title sequences and TV commercials.

Here is Robin’s review of DaVinci Resolve 12, which was released late last year. Please note, it’s written from the point of view of a colourist/editor who is returning to try Resolve after exclusively grading and editing on other kit for the last few years, so is more a general catch up of today’s Resolve rather than just an extensive review of the new features added to version 12.

So, my dongle arrived in the post – “Go on, take Resolve 12 out for a spin,” the note said and, “We’d like to hear what you think of it, a lot has changed”. The marketing crew from Blackmagic were working every angle.

I have to say it has been a while since I really took a close look at Resolve and although it was never a turkey at the time it just didn’t seem the right fit for me. Have they done enough to change my mind?

I downloaded the software, whacked in the license and duuumph – not much – think of the sfx for the Millennium Falcon with a flat battery.

I had hoped my three year old Mac with it’s maxed out lump of RAM, SSD and stuffed extras would have the grunt to do something but ‘computer says no. DaVinci needs to pair up with some chunky GPU and a compatible I/O card, so it’s worth keeping that in mind.

A week later and now on a loaner system, it was a straightforward install to get going, but you can still feel the software sucking the life out of the GPU and RAM so it’s definitely not a program for a weak system. 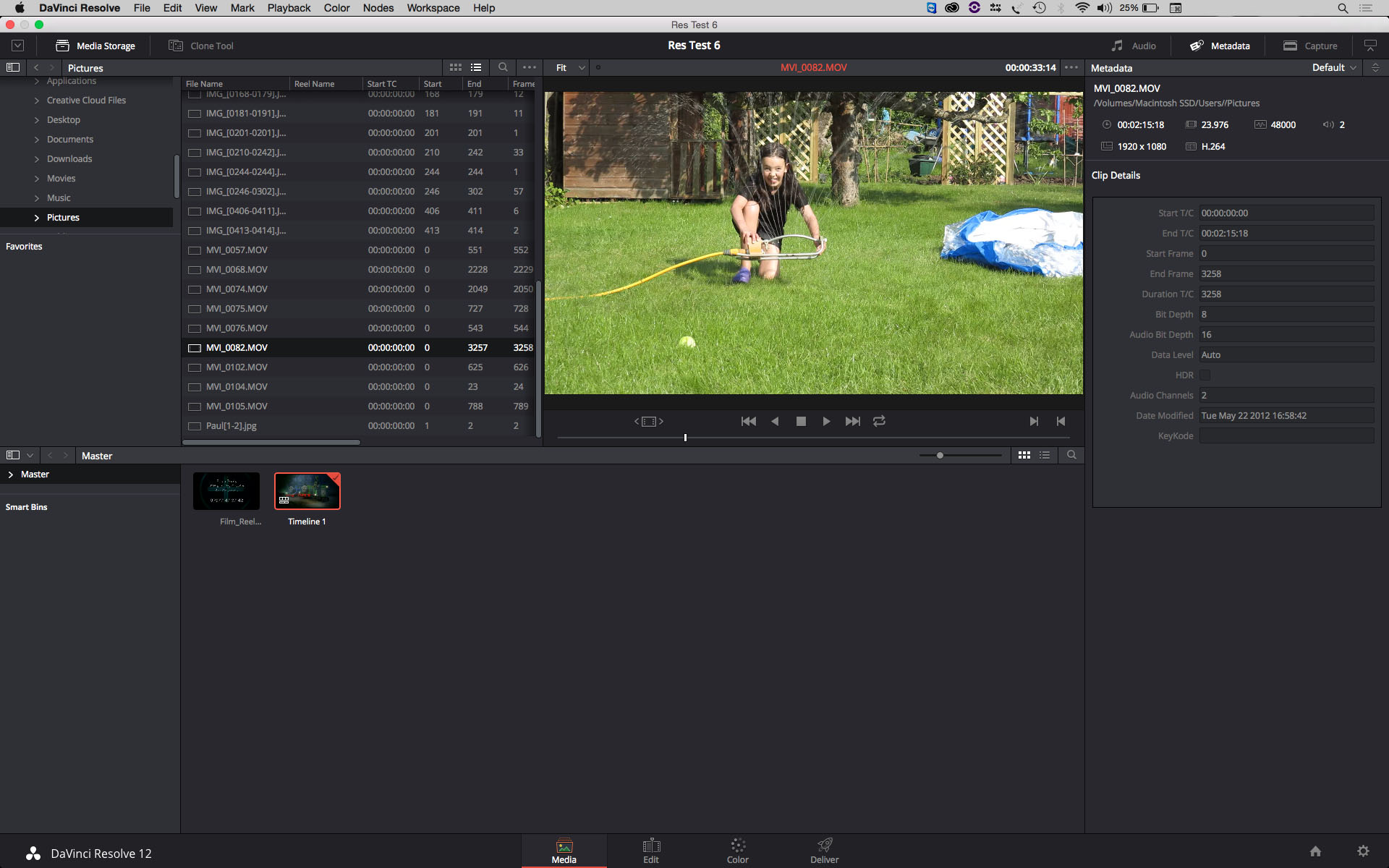 When writing this up, I was quite tempted to do a ‘Top Gear’, you know where Clarkson leads you down one path listing the great performance, amazing acceleration, etc, only to burst the bubble towards the end with the Stig’s hopeless attempts to get the vehicle around a corner. But my only concern with that approach is most people won’t actually get to the end of the piece to take away an impression.

So I’ll put it straight down on the table – it’s good and a very accomplished package of software.

So for me DaVinci is recognised as, and must succeed first and foremost as the colourist’s tool. So let’s dive in there. 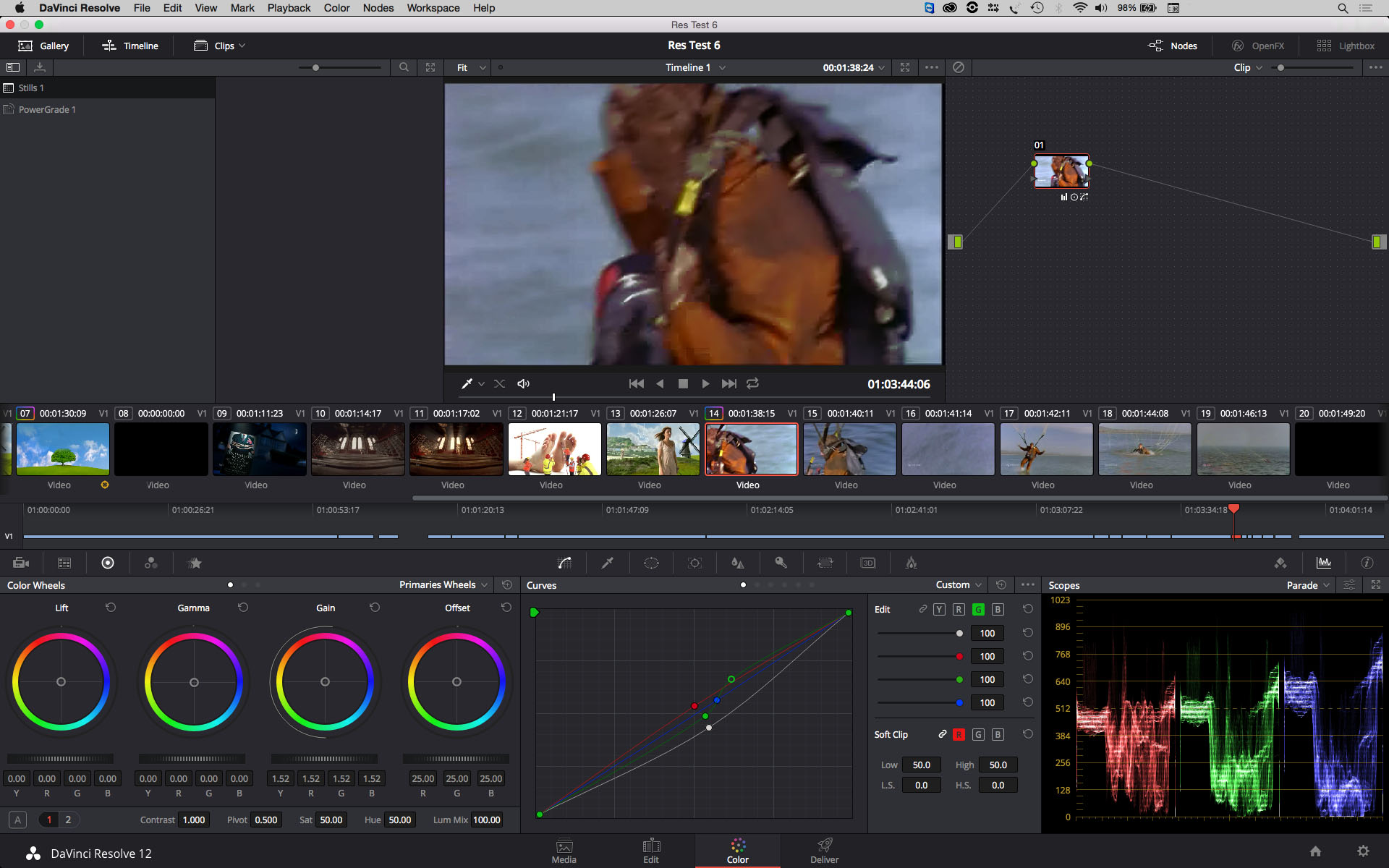 The first thing is the new look UI (or at least new to me since I last used Resolve). Here Blackmagic has done well; it’s a clean and uncluttered layout compared to many pieces of professional software; it’s almost simplistic but that actually isn’t a bad thing. It really means you have just what you need and not a desk that’s 95% full of all the things you’ll use less than 5% of the time.

The UI is customizable, but not completely. Think of it more in a modifiable way. It does mean less time fiddling and more time just getting on with it. There is another important plus on the UI, which is the built-in design that gently guides you along from left to right and down the screen. Having taken in your footage, the software is almost nudging you to move over to the edit page, then colour and eventually export. It’s a nice touch.

With today’s multi format file-based media there is the need to manage that media on a clip-by-clip basis even within the same timeline. Blackmagic has responded and now implement a whole new colour management system, which looks after this and keeps all that data in float space so it is still there if you need it later.

A few other highlights for me include the new 3D colour picker, which you can use as a keyer and comes with a despill. It does quite a reasonable job so is handy for rough keys and visual layouts on a slap comp. But realistically, most projects will want to throw that over to some more dedicated software for a final. But it still looks handy as a skin picker, which is a definite requirement in today’s grades.

There’s a neat function to turn your prefixed shape into a freeform spline. Oh, how many times could I use that when you set in a vignette or highlight and just want to tweak off some area.

Multicam is handled very nicely in DaVinci now; you can effectively grade each camera angle and then chop away – it’s a good example of DaVinci’s efficient tie up of the grade with the edit. 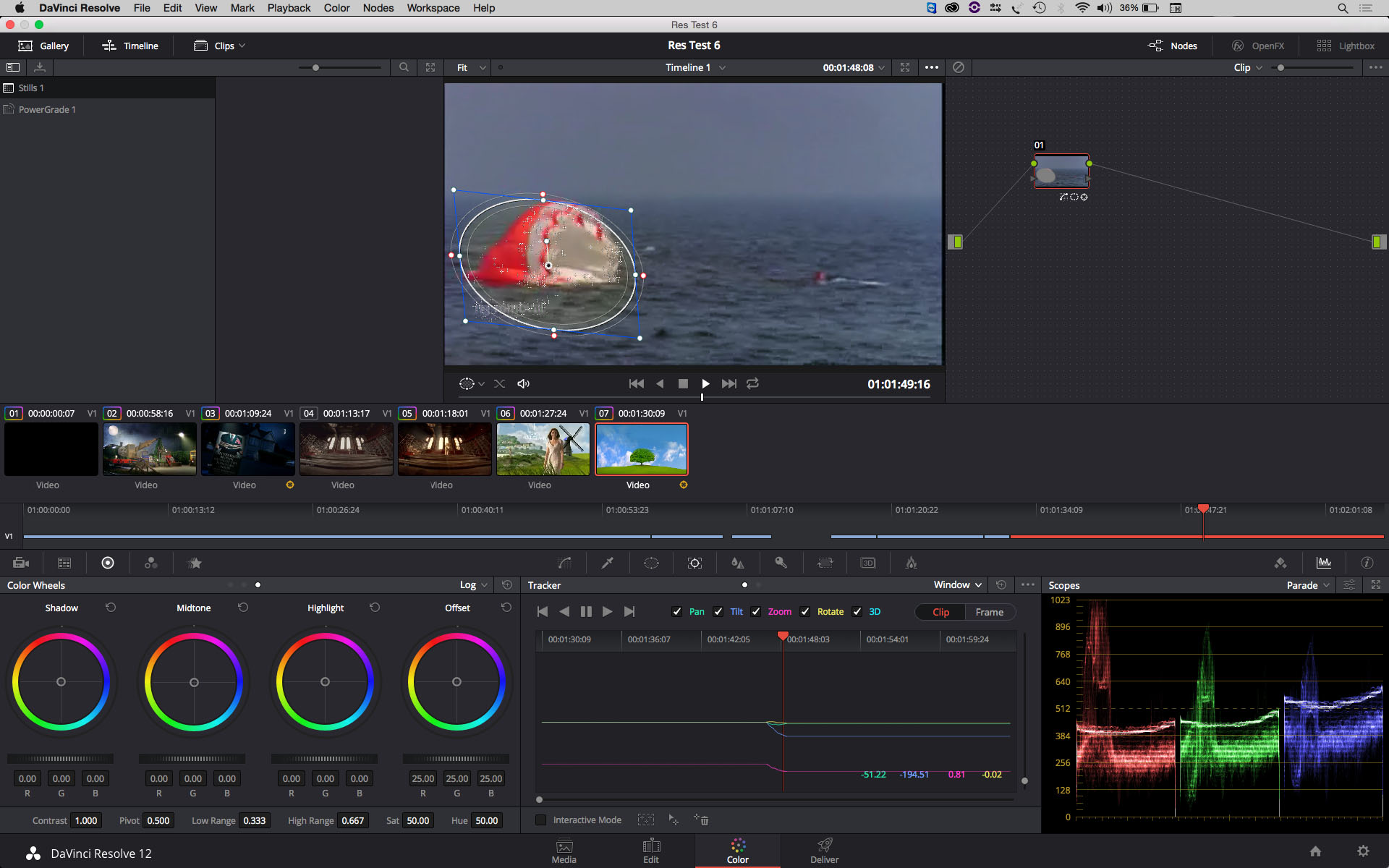 Now then, the tracker is very nice; it’s quick to use and does one of the best jobs I’ve seen. Blackmagic has made an update with a really nice 3D or perhaps more 2.5D version; it tracks off-screen without much fuss and is even easy to manually update.

There are a few other cute tricks in the DaVinci bag. I like the inclusion of smart bins which some well-established edit systems have only just included. There’s an auto grade that could be useful to some, a colour match and colour balance swatch feature, which gives a handy starting point if things have been shot under difficult lighting conditions.

All said, it is quick and easy to produce excellent results.

Of course now with DaVinci, colour is only half the story, as it boasts a more than capable editor in its arsenal of functionality. 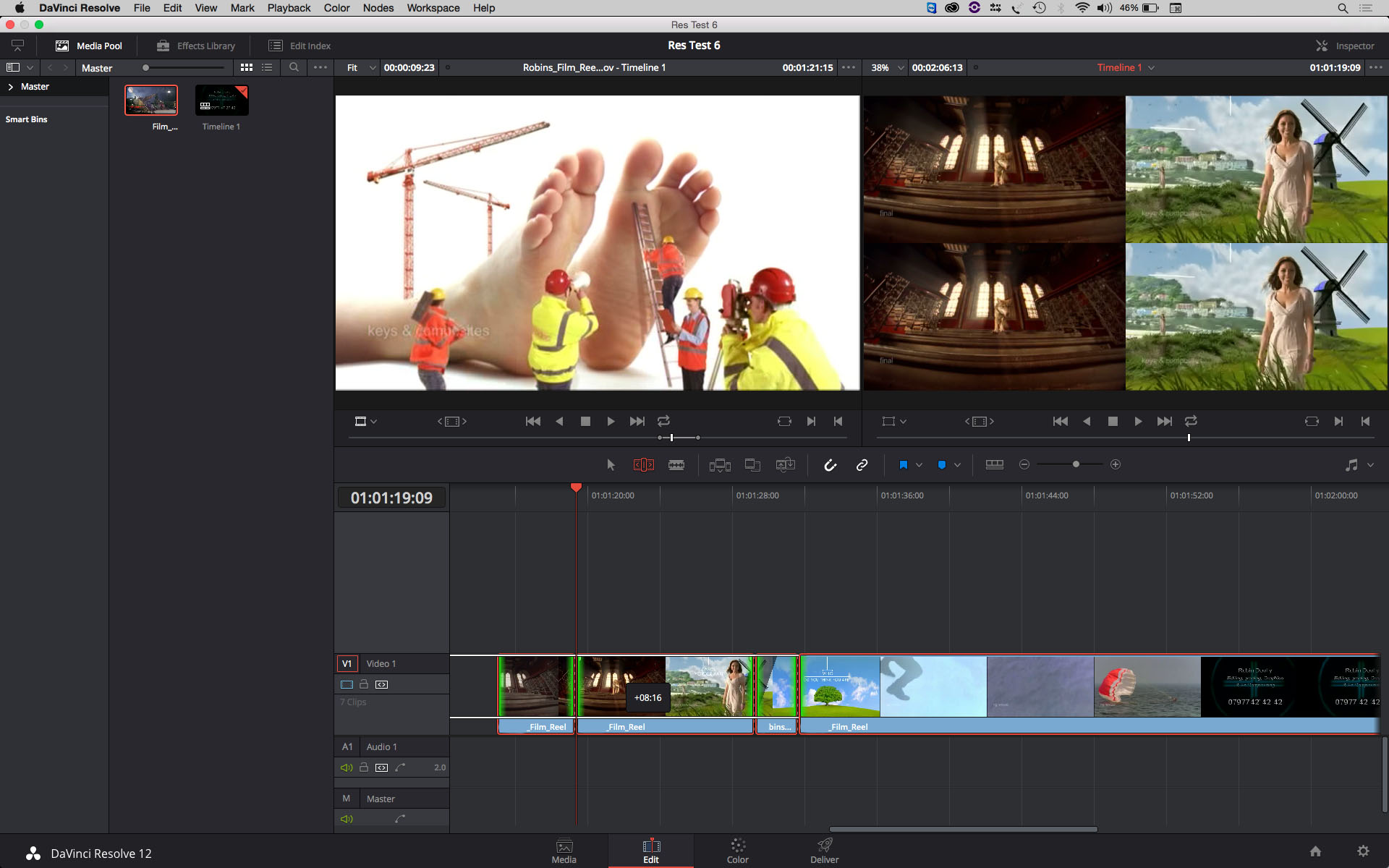 It scores well in all the major editing functions. It’s clean and intuitive with a nice uncluttered layout. Any editor should feel right at home with the automatic tool selection. Somehow, they have just made it that bit easier to get straight in on the coalface of chopping and splicing.

It is less of a fiddle than Avid’s tool selection, perhaps there is less in it and the editing experience is the better for it; a case of less is more. You can drag and drop straight to the timeline, three-point edit, there’s optical flow for re-timing, multicam which even comes with an audio sync. Well done Avid for noticing they were one of only a few without that feature and are only just catching up with the crowd now.

Support for OXF plugins raises its game as an online finisher, except for those on Linux who will have to wait and sit that one out. I like the group trim, which is handy for those end credits. You can do grown up things such as composite clips and nesting timelines with a decompose function too.

Blackmagic has completely re-worked the audio engine so now it scrubs nicely and has more functionality with waveforms, record levels and a bunch more. 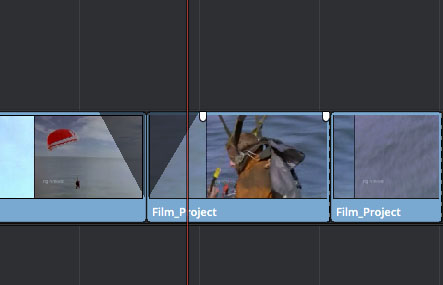 I love the drag fade handles that are so quick and easy and akin to audio software. They also have gone to the effort of providing keyboard layout templates matching other editing applications to help migrating editors. Smooth cut is worth a mention – it’s similar to Avid and Premiere’s morph cut and has been a lifesaver for me on few occasions. 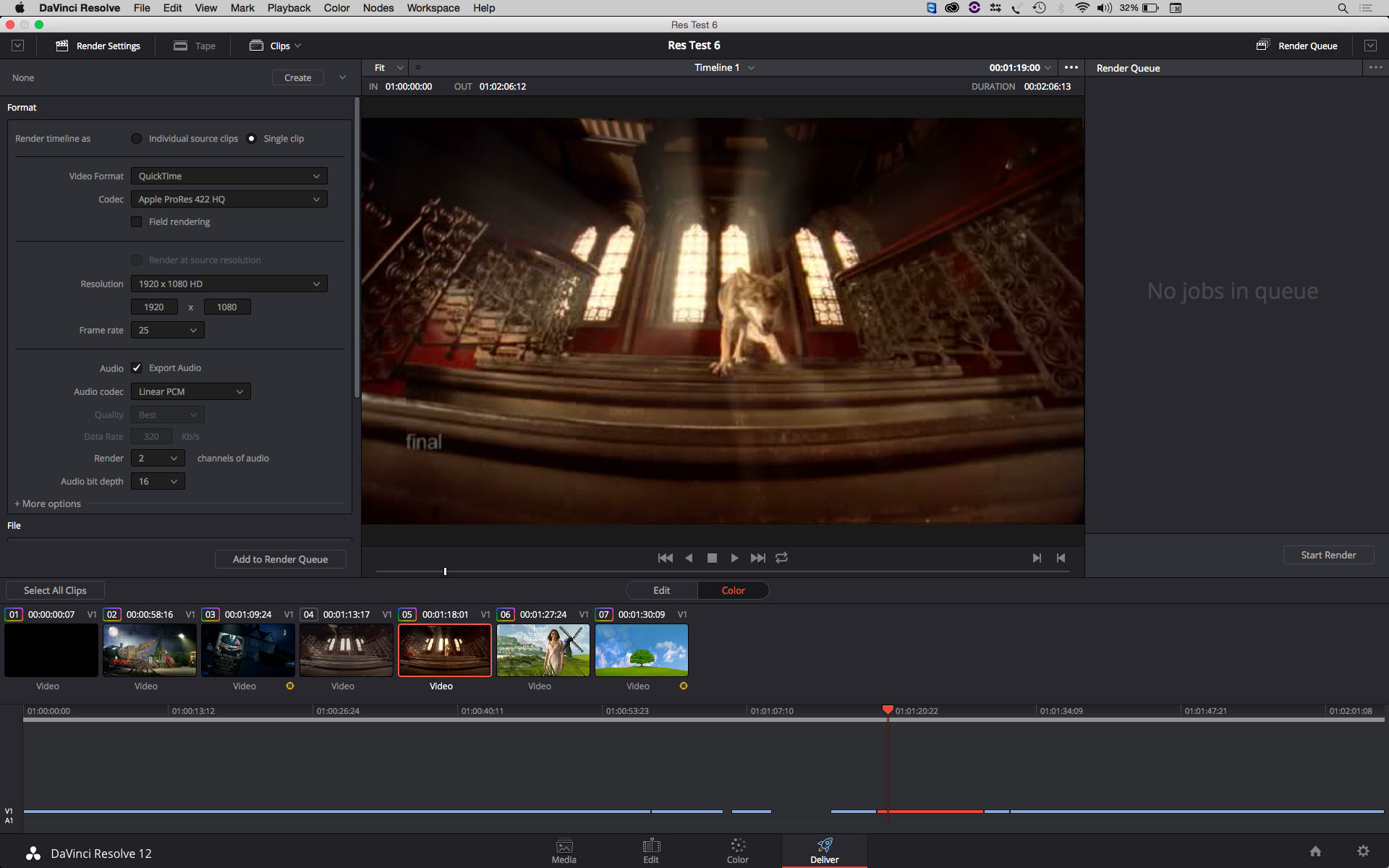 A positive review but I do have some negatives. On the colour side, I think it misses a trick by not automatically key picking off the source image so you can grade underneath a secondary.

I felt I was missing some of those more exquisite tweaks and controls available on Baselight and Nucoder and maybe some of the color space remapping for exports. Shortcut layouts seem to be stored per project rather than user, which seemed a strange approach for me.

Having left DaVinci on the shelf for some time, I was impressed with this version and the rapid development along with the host of new features. This is a fantastic piece of software but if I had a criticism it might be that it is almost too accomplished and could start to suffer from an identity crisis.

Editing is right up there with the best but it does come at a time when the UK industry leans towards keeping the edit with the editor and a grade with a colourist so in that respect the Baselight approach fits very well with that arrangement.

I’m also not convinced about the strategy of Grant Petty CEO of Blackmagic in giving away such powerful and professional software, which might risk destroying the very industry he wants to open up.

Blackmagic is on one of the most exciting and dramatic pathways in the industry at this moment. Having now acquired Fusion; a powerful compositing package that integrates into Avid; it firmly have a foot in all areas of the moving visual industry. Editing, colour grading and visual effects now add to standards conversion, cameras and many other areas of hardware and software.

What’s next? Will Blackmagic turn DaVinci into a node inside Fusion or vice versa? It is definitely the one to watch and the competition to beat. It is hard to compete with free, especially when it is this good.