June 1992.  Twenty-five years ago this month. Bloody hell. That was when Mykola Pawluk and I started The Independent Post Company from my spare room.  We had an Amstrad computer, a few ambitious ideas, a confirmed first job from Absolutely Productions, the vague possibility of a couple of series from Hat Trick and the comments on our business model of then MD of Molinare Colin Brown ringing in our ears: “I can’t see it lasting.”

In truth, I remember thinking “If I can just get us to the six-month mark…”

Back then, we were kicking against the norm and attracted as much suspicion as we did support.  We dry-hired online suites (off-line in those days was Betacam and didn’t really count – non-linear was a couple of years away) by the hour which meant we were relieved of the responsibility of worrying about the kit, its maintenance, the endless upgrades and the tortuous technical issues.  With online suites costing anything up to a million quid in those days it was quite a burden to absolve ourselves from.  Luckily the quality and the amount of work we commanded – and the doldrums in which post houses found themselves in those days – meant we found available suites easily enough. 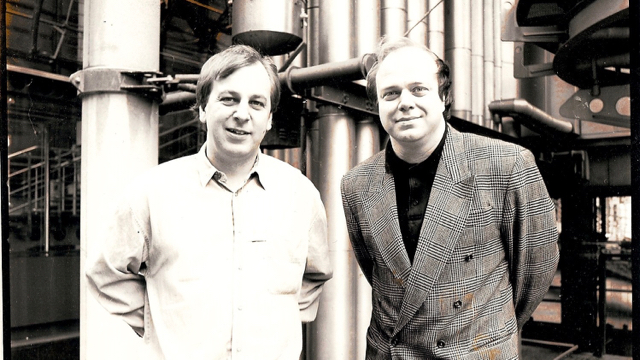 Our first port of call was Molinare where Colin Brown (despite his reservations about our long-term prospects), Nikki Sargent and Vicki Dunn got stuck in behind our vision and backed us up with considerable support.

And the work rolled in.  We were joined by Steve Tempia and Chris Wadsworth and were set for a sparkling future when the old maxim that could not be more appropriate to television post production – “the only constant is change” – slapped us in the face.  Non-linear systems arrived and threatened to devastate our business.  We were no longer looking at marking up an edit suite that had a capital cost of seven figures.  The movement of a decimal place was about to decimate Independent Post so we resolved to embrace the new technology – realising it was so much more portable – and became a fully-fledged agency. We were joined by a fresh-faced Caroline Duncan who was hugely instrumental in our progress during the formative early days.

And the rest is history.  Twenty-five years later we’ve grown into the biggest broadcast editor agency in the UK (actually I claim in Europe when I’m showing off and whilst that’s technically true, it’s only because there aren’t any outside the UK) currently representing 180 top broadcast editors who cut something like three thousand programmes a year between them.

The associated operation of administering those bookings: the scheduling, the contractual agreements to say nothing of putting the right person in the right job and making sure they’re at the right place at the right time requires planning that would grace a military invasion.

No wonder then that Anthony Crossby who joined us as a Booker some sixteen or so years ago now carries the title Director of Operations while Natasha Carpenter, who joined as the office assistant ten years ago has added ‘Ballard’ to her surname and Director of Development to her job description.
To add to the rest of the bookings team of Bekki Finnigan, Molly Britnell and Freddi Skyers we’ve also recently been joined by industry veteran Louise Davis who ran Objective’s in-house post department until recently.

It hasn’t always been a breeze of course and the ill wind that plagues most small businesses in their early years certainly threatened to blow us off course for awhile.  But in retrospect I’d put them down to the growing pains of an industry almost unrecognisable from the one that existed when we set out.

The most obvious change in the industry is the consequence of the portability that non-linear systems offer.  When we first started, every linear suite was configured differently.  That meant an editor had to spend hours (or was it days) working out how the edit controller talked to the effects box, whether the vision mixer was up to the job, how the caption generator worked and how many one inch machines (I’ll explain later) could be accessed at any one time.  Most post houses didn’t really bother with off-line suites.  You’d be charged around £200 an hour for a three-tape deck edit.  Imagine that.

Nowadays everything is contained in a little white box and, as a result, our editors walk into an Avid suite anywhere in the world and usually the only technical problem they face is how to turn the power on.

So that change has in itself contributed hugely to the rise of the freelance industry.  Back in ’92 my original plan had a head count of about half a dozen editors (that was around 50% of the total freelance broadcast television editors in London at the time). Suddenly the streets were alive with freelancers, post houses were reducing numbers and production companies setting up edit suites in cupboards and hiring freelancers.  Editors could work anywhere at any time as the idiosyncrasies of the edit suite had been eliminated, seemingly at a single stroke.

It all looked like we had planned the whole thing immaculately.  It was, of course, nothing but luck.

But without doubt the biggest change has been attitude.  Twenty-five years ago, a producer would call their favourite post house to book their favourite edit suite.  The editor was invariably an after-thought.  Nowadays the emphasis is always on getting the right creative editor for the job and that’s an attitude that we’re more than ready to accept some of the credit for changing.  Machines don’t edit, the best creative talent will ensure a better programme.  This self-evident truth is now ingrained in post-production culture.  Twenty-five years ago, it wasn’t.

So what’s next for us? Good question and one that I can answer.  But we’ll leave that for another time…