The indie sector is being reshaped by the rise of streaming, a fall in budgets and the muddle of Brexit. Tim Dams on the findings of Production 100  , Televisual’s annual survey of the indie TV market

The turnover of the top 100 indies in the Production 100 has risen 11.8% to £2.17bn this year, proving there is still plenty of life in a TV market that is being fundamentally reshaped by changing viewing habits.   Indeed, the prizes are bigger than ever for many producers thanks to the rise of global SVoD commissioners like Netflix and Amazon. 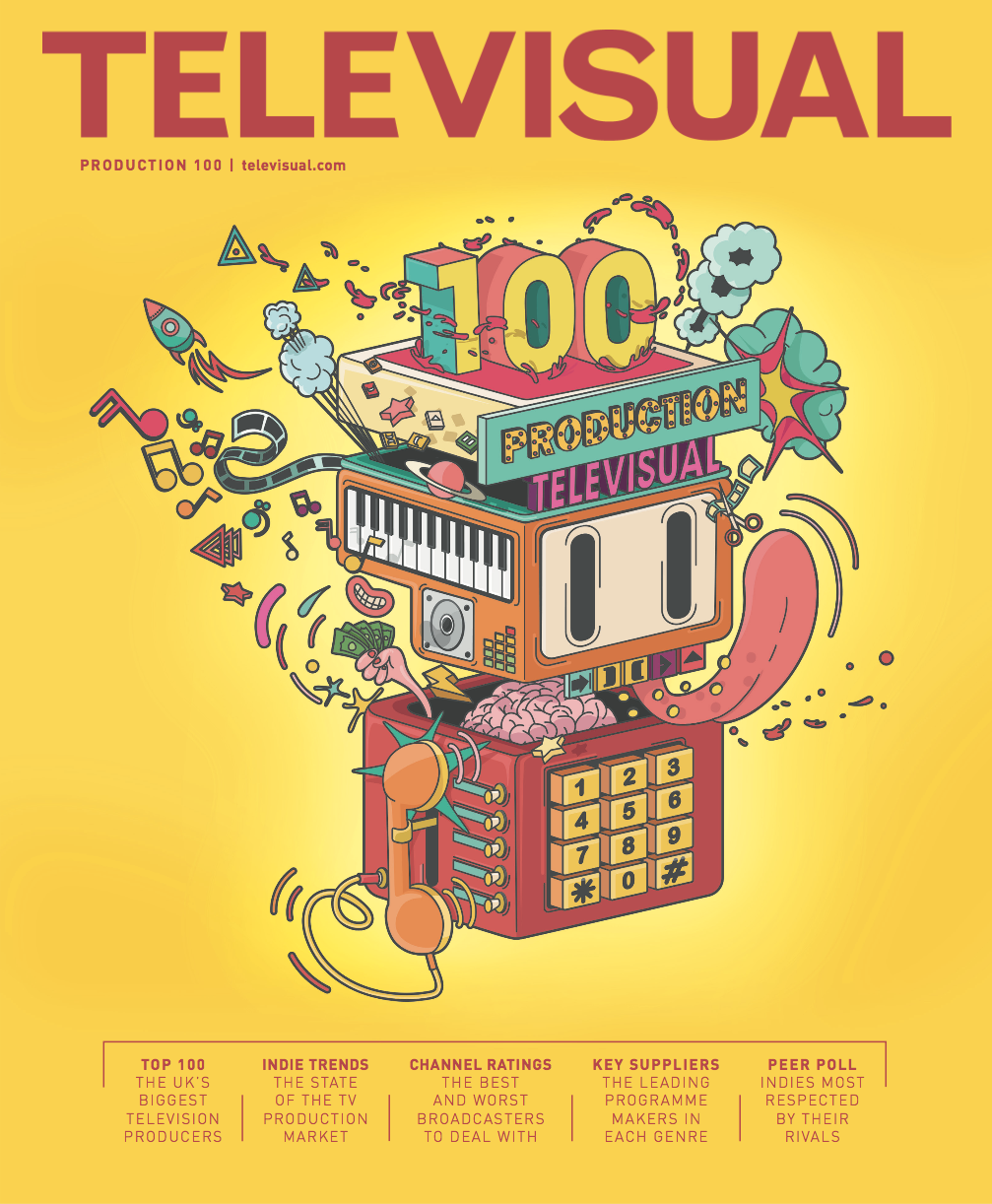 Left Bank, for example, climbs to second place in the Production 100, growing its turnover from £101m to £148m thanks to mega-budget Netflix commission The Crown.

Many other indies have registered decent growth. Sports producer IMG retains its number one spot for the fifth year in a row, with revenues climbing from £175.3 to £197.1m. IMG diversified into non-sports production this year with the launch of a new entertainment, factual and formats division – which has already picked up a handful of volume commissions.

Third-placed Avalon became one of a handful of UK indies to cross the £100m turnover mark; the entertainment producer and talent manager’s revenues are up from £93.2m to £114.6m. It now supplies all channels in the UK, as well as a wide range of networks in the US.

Indies working in multiple genres have done well, such as Studio Lambert and Raw. Both have built on their strong reputations in factual to push into drama, earning themselves places in the top 10.

Dramatic moves
The drama boom was the big trend of last year’s Production 100, and it’s an important factor once again. Indies such as The Ink Factory and House of Tomorrow posted strong results, buoyed by big budget shows with global backers like The Night Manager and Black Mirror. But it has not been plain sailing for all scripted producers. The market has been flooded with new drama indies, and there has been a hiatus in scripted orders because of drama commissioner changes at the BBC, ITV and C4.

Factual perks up
The factual genre has been eclipsed in recent years by the drama gold rush. But many established factual  producers have done surprisingly well, such as Boundless, Blast! Films, ITN Productions, Keo and Nutopia.

Blast!, for example, has grown turnover from £15.5m to £25.5m, on the back some strong returning series such as The Supervet; the Sky Vision-owned producer also topped our Peer Poll as the most respected indie.

Nutopia has nearly doubled turnover to £21.7m following a slew of big commissions from international broadcasters. Newer factual indies like Plimsoll, Knickerbockerglory, Label1, Primal Media and Naked Entertainment have also put in robust performances, many on the back of long-running series wins.

The average indie earns 64.5% of its revenues from UK broadcasters. ClearStory is typical of many when it says that “UK broadcaster commissions are still our core business.”

So too is Plimsoll: “Our relationships with UK commissioners are paramount to the growth of our business.” Indeed, the majority of indies (46%) say the UK is where they are seeing most growth in their business. However, this is down significantly on last year’s figure (72%).

Rise of the streamers
Instead, many indies cite the international market – in particular from SVoD players like Amazon and Netflix – as a key growth area. Eleven Film says: “SVoD buyers are proving transformative – buying programming that typically UK broadcasters would shy away from.” Bandit Television adds: “The opportunities for scripted production are obviously increased with SVoD commissioning.” Neal Street points to growth in secondary drama sales, particularly to Netflix.

It’s not just dramas they are after. Pulse says SVoD companies are “aggressively buying in the factual space.” Specialist factual indie Icon Films says “its greatest potential for growth” comes from streaming platforms such as Netflix, Amazon, Curiosity Stream and Blue Ant.”

The US remains an important focus. Nutopia, for example, plans to expand its client base in America, and to open an East Coast office this year to produce local content.   ITN is also aggressively targeting the US market. In the last year, ITN took on eight full time roles in the US; it is aiming for 10% of all revenue from the US by 2020.

DSP, notes there is a ‘resurgence’ in demand for premium factual in the US, particularly in light of Nat Geo’s new commissioning strategy.

Eleven Film, meanwhile, has three projects in development with US cable networks being developed out of the UK.

The flip side of working for international broadcasters is that indies mostly do so on a work for hire basis, rather than retaining rights as in the UK. It means many indies are worried about the long term. Knickerbockerglory says: “The rights position does make me think it’s the last days of Rome”. 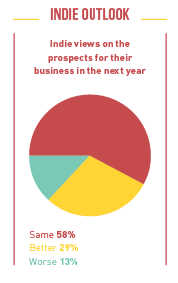 Looking ahead, indies seem sanguine about their prospects. Most, 58%, say they expect business to remain the same, while 29% think it will improve. 13% believe business will get worse.   That said, many are vocal about the challenges ahead – from Brexit through to increased competition, rising costs and to an advertising downturn which looks set to reduce the budgets of commercial broadcasters.

Budget crunch
Falling budgets are a particular concern this year, more so than usual. Indies say that budgets have fallen an average of 2.4% over the past year, following years of decline. Several indies say they have noticed commercial broadcasters battening down the hatches ahead of what they perceive to be a challenging year for ad revenues. CPL, for example, is expecting production budgets to be “much tighter.”

Rising costs
With costs and on-screen expectations rising, many indies are having to be more inventive about how they produce and how they raise money for shows. There is “more emphasis on producers finding finance,” says Thumbs Up. Dragonfly, meanwhile, says it is having to deficit fund shows more often because of “diminishing budgets and higher production costs/ambitions.”

On and off-screen talent costs are widely acknowledged to have risen because of the boom in drama, film and animation production. “The availability of off-screen production talent is scarce and on-screen talent expect greater participation” says Voltage. Sixteen South adds that  it is harder than ever to staff up because so many animated shows are being made. “All of the great people are already working. It has been a challenge to crew up to 130 people.”

Commission challenges
Securing a commission seems to be more difficult too. Changes among broadcaster commissioning teams have long been a problem for indies, creating periods of hiatus when it is difficult to win orders. It has been no different this year. Adding to the problem, however, is the increased complexity of commissioning now that multiple funders, rights and deliverables need to be juggled.

Nutopia says securing commissions with big budgets can take “very many months” to finally agree on all editorial, budget and contractual terms.

Furthermore, “eleventh hour signatures on contracts mean it’s very difficult to locate, attract and secure the very best high-end talent in a timely manner.” Says Remedy: “With every commission taking longer to achieve and every contract renewal requiring more work to secure, operating costs have continued to increase, which has affected the rate at which turnover becomes profit.”

Sugar Films likens broadcaster-funded development to a parking lot. “Projects that would previously have gone into pre-production with an agreement to resolve minor outstanding issues are now parked in further rounds of development.”
Commissioners and broadcasters “seem to have little understanding of cash-flow and the true cost of delay for a small business.”

Competition issues
At the same time, there’s a perception that the market is becoming ever more competitive following a spate of indie launches by senior execs. The momentum has continued this year, with launches including Expectation (Peter Fincham and Tim Hincks), House Productions (Tessa Ross and Juliette Howell) and 72 Films (David Glover and Mark Raphael).

Chrysalis Vision says there “seems to be one new TV drama indie announced every week.”   Firecracker notes there are “more and more new factual companies continuing to open all the time and not enough work to go round for them all to succeed.”

Established players like Talkback speak of “increased competition from the wave of new indies”. Adds Chalkboard: “It sometimes feels like there is more money for start-ups than there is for commissioning itself.

Still, smaller producers say that the dominance of the super indies continues to squeeze small producers out. Popkorn, for example, speaks of “a lack of ambition” by broadcasters to commission outside the small pool of larger companies.

Others note that ITV and C5 have boosted their commissioning from inhouse producers, while the launch of BBC Studios means more competition (but also the potential to win more BBC business).

The Brexit effect
The realisation that Brexit is likely to have a significant impact on business really comes to the fore in this year’s Production 100. Last year, the exact impact of the vote to leave the EU was still being worked out by indies.

Currency fluctuations have already affected the cost of overseas filming for many producers (but made UK shows cheaper for foreign buyers).   Many fear that the government’s protracted Brexit negotiations are affecting business confidence, depressing ad revenues at commercial broadcasters.

Like many indies, Blue Zoo is worried about the implications for the 35% of its workforce who are non-UK residents. Neal Street says Brexit is “already causing some problems with the weak pound and talent concerns.”

Indies also worry that Brexit will affect the ability of UK companies to strike co-pro deals and international sales, particularly for companies looking to sell into European markets which have quotas for European content. Says Woodcut: “If we no longer count as European that will have a massive impact on us and other production companies working in the international market.”

Some fear an exodus of production out of the UK, particularly in sectors like animation. Lupus Films says: “European financing is likely to be reduced and US studios are likely to take more commissions to Ireland rather than the UK."

Sixteen South comments: “Brexit has been a scary proposition.  Since we fund most of our shows through pre-sales, we need to make sure that our content remains EU produced to meet the EU quotas from broadcasters. We have set up an Irish company to be sure that we continue as a European producer.”

To read the full Production 100 survey, visit the Reports and Surveys section of Televisual.com

Entertainment TV has found a new lease of life, with several new big hits across the schedules and a feeling that there’s more to come. Tim Dams reports Taken from Televisual’s Summer issue Despite – or perhaps >>>

Sponsored by Curtis Brown Creative Acclaimed TV-Dramatist Colin Teevan reflects on his career and the affect that recent restrictions have had on TV production. Colin Teevan is a celebrated playwright, translator, and writer for screen. He is >>>