The comparisons with The Inbetweeners, admits Damon Beesley, are inevitable.

After all, White Gold is the first comedy he’s written and directed since the global success of The Inbetweeners.

But White Gold, he says, is rather different. Beesley describes the show, about Essex double glazing salesmen in 1983, as a comedy drama – one that follows the outrageous highs and lows of its lead character, played by Ed Westwick. “The Inbetweeners was faster paced. I knew going into the next thing, it was not going to hit the joke rate.”

But there are plenty of similarities. Two of The Inbetweeners’ lead characters, Joe Thomas and James Buckley, also star. There are plenty of outrageous jokes too. Beesley also notes the parallels between a sixth form common room and a double glazing showroom, which he describes as being populated with stunted, competitive children living in an adult world. 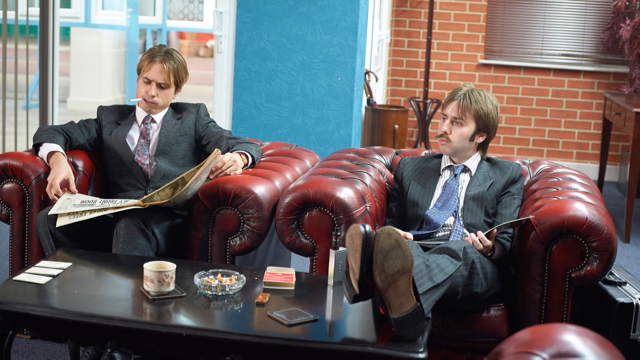 Beesley says the idea for White Gold pre-dates The Inbetweeners. “It’s 35 years in the making,” he explains. His dad was a double glazing salesman in the 1980s and used to bring 12-year old Damon to the showroom. “It stuck with me. There’s a lot of my dad in it. He was in my head when I was writing it.”

Well received at its press screening last month, White Gold has a brilliant, filmic opening scene which sees Westwick preening himself for work (with copious hairspray) while listening to Laura Branigan’s 1980s hit Gloria, all the while making asides direct to camera. Beesley readily acknowledges the influence of Martin Scorsese’s similarly 1980s set The Wolf of Wall Street. “I watched it and thought this is the way you do it. You have to lean in to the character’s terrible behaviour.”

White Gold is the first outing for Fudge Park, the indie that Beesley set up in 2015 with fellow Inbetweeners creator Iain Morris. Fudge Park is also producing Ill Behaviour, written by Sam Bain (Peep Show) and is set to make its first movie for release next year.