Audiences are consuming more drama and demand is high from streamers and PSBs, but producers are now facing a logjam as delayed productions attempt to deliver all at once. Tim Dams reports

I don’t really know where to start with this year,” says Willow Grylls, CEO of Des, White House Farm, Cobra, The Deceived and The Spanish Princess producer New Pictures, when asked to reflect on the state of the drama sector in 2020.

She is not alone. For drama producers, the year has been a rollercoaster. Many went in to 2020 on a high, amid surging demand for content and talk of a golden age for the scripted sector.

Since March, Covid-19 has brought unprecedented challenges. Production has been hugely disrupted, livelihoods badly affected, and commissioning thrown into disarray. There has been opportunity too: demand for drama has never been higher thanks to lockdowns, with audiences lapping up shows such as Normal People, I May Destroy You, Quiz, White House Farm, Des, The Salisbury Poisonings, Us, Gangs of London and All Creatures Great and Small.

As well as Covid-19, drama producers have also been grappling with a number of other issues in 2020. Diversity has emerged as a hot button topic. The killing of George Floyd and the jailing of disgraced film producer Harvey Weinstein gave impetus to the Black Lives Matter and #MeToo campaigns, causing the drama sector to reflect on the imbalances it has long perpetuated on and off screen.

Elsewhere, drama producers continue to contend with a fast-changing market that is being reshaped by the streamers, with the likes of Disney+, BritBox and Apple TV+ all launching within the past 12 months. Streaming pioneers Netflix and Amazon, meanwhile, have gone from strength to strength, gaining subscribers during the pandemic and outbidding terrestrials for premium content thanks to their deep pockets.

Supply and demand
The flip side of the opportunities provided by the streamers is that the drama market has become more crowded and competitive, with more scripted producers launching and vying for commissioners’ attention.

Simon Heath, the CEO of Bodyguard and Line of Duty producer World Productions, neatly sums up the predicament facing the drama sector: “We would all recognise that the demand for content has never been greater. If you’ve got significant parts of the population stuck at home for long periods of time, then the television becomes central…But there is difficulty in terms of supply, and all the challenges around supplying drama. That is going to define 2021.”

Indeed, 2021 is gearing up to be a busy but challenging year for drama producers. 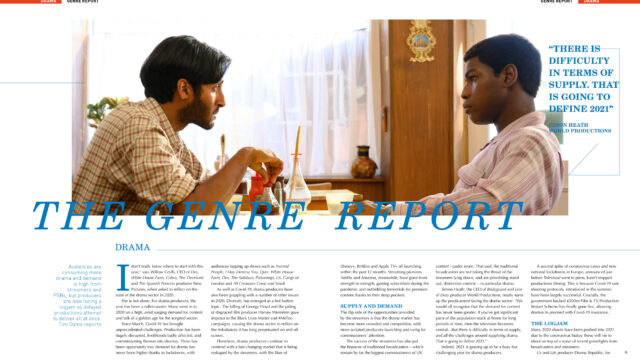