The SVOD market has been a target for drama producers for a while. Now more and more factual opportunities are opening up. Pippa Considine reports

Factual producers in the UK – sheltering in their home offices, working out Covid-friendly filming schedules – may feel that they are still at the outside edges of the digital ripple.

But the Covid effect has turbo-charged the pivot to non-linear viewing. Streamers of different shapes and sizes are stacking their budgets and broadening their factual portfolios, with UK producers supplying plenty of content. While terrestrials are edging into a non-linear mindset, fighting to keep audiences with them as the viewers decide when to watch and who to pay.

“Linear channels will be around for many, many years, largely consumed by older people, but still as very important services,” Mark Thompson, Former Channel 4 chief executive and BBC director general, told Ofcom’s Small Screen Big Debate conference in October. “But the commissioning pounds and control, and the premiering of most of the content, needs to be online now.”

The BBC iPlayer now has more than 550 million streaming requests a month, while Channel 4 saw a 50% uptick for its on-demand programming during lockdown. ITV’s last results saw online advertising revenues up 21%, and VoD viewing up 13%. Both the BBC and ITV have hiked their commitment to commissioning content with on-demand distribution front of mind.

The digital shift
Watching ad revenues spiral down during the lockdown was a salutary lesson. “When we look at times like these people aren’t going to stop subscribing to things, but advertiser funding is going to be a problem,” says co-founder at Blink Films, Justine Kershaw. “We’d be fools to ignore the streamer market.” Blink’s recent work includes six-parter Meet The Chimps for Disney Plus, sitting alongside the three-parter Royals Declassified for Channel 4. “We’re looking five years ahead, at a mixed economy,” says Kershaw.

In the UK, as well as marked increases in viewing of traditional broadcaster’s content via their on-demand platforms, Ofcom’s Media Nations report estimated 12 million adults gained access to a new SVoD subscription during lockdown. And it’s not just younger audiences: 15 per cent of over 64s used SVoD services in that period.

“Viewing habits are changing rapidly,” says BBC Studios, director of factual, Tom McDonald. While acknowledging the continued importance of linear viewing, he’s clear that on-demand viewing habits are now part-and-parcel of the development challenge. “It’s absolutely front of mind when thinking of ideas: either box-set because it’s an anthology you want to watch, or the hook is so gripping at the end of the episode that you want to go over onto the next episode….It’s in the DNA of how we’re thinking.” 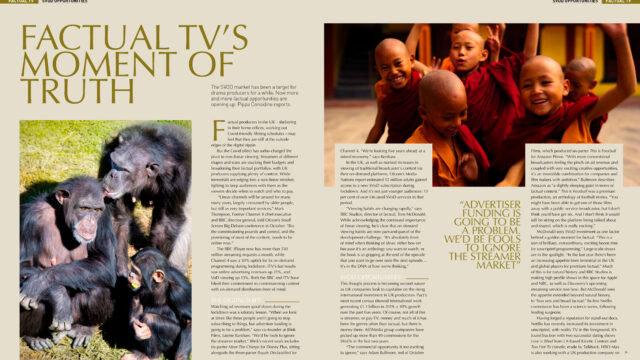