Comment: Unable to secure a TV commission, cookery writer Sally Bee decided to make her own internet show. Here she explains why – and how – she has done it.

I am just about to embark on an exciting new project that maybe a couple of years ago I wouldn’t have dreamed of doing.

For a while I have wanted to make a particular television show but have felt held back by the current constraints of television.

Low budgets, lack of commissions and political decisions are all hard to overcome when you have a pretty fixed idea in your head about a show that you’d like to make. Especially when it involves cooking and chatting and your name is not Jamie or Nigella.

Having spoken directly to commissioning editors, I can sense their frustration at not being able to follow their own ideals and explore new formats.

New commissions are at an all time low and many new commissions are re-works of tired old formats. I can understand the situation completely and don’t envy the commissioners’ position, yet we do need to get out of the rut of the same old – same old and push the boundaries a bit more.

I am an idealist and I think, if anything, I’m guilty of seeing life through rose tinted glasses – but surely in the fantasy world of television, looking through a rosy lens is a good thing! I believe that a true passion for an idea is half of the battle won.

To set the scene; my background – before having three children and three heart attacks at the age of 36! – was in media. I trained at drama school and worked as a jobbing actress and presenter for some 20 years. I write scripts, articles and books and have produced shows in a previous life for Sky TV. My husband, Dogan, is a Steadicam Operator, so while he was busy being ‘steady ‘– I happily took a backseat at home and had a few babies!

In 2004, disaster struck my family when I suffered three massive heart attacks out of the blue, in the space of just one week. Dogan, my husband was called to say goodbye as it was thought that I would die. 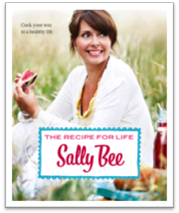 Miraculously (and obviously!) I survived and now six years later I am lucky to be doing really well. I have a great publishing career with my second healthy cookbook having just been released. It’s great – you should buy it – it’s called The Recipe For Life! I have appeared on This Morning, GMTV, BBC Breakfast and have a busy TV Cook career that I enjoy.

During the last two years that I‘ve been signed to my publishers, Harper Collins, I have met with numerous television production companies and commissioners who have invited my ideas and expressed their desire for us to work together.

But I have found it a challenge letting go of my beliefs and hopes for a programme that I want to fully commit to. Therefore, my plan is to launch my own broadcast quality TV show – on the Internet. Although watching television on the Internet isn’t a new idea – approaching the project from this angle, it seems – is.

It was actually my brilliant and forward-thinking publisher at Harper Collins, Jenny Heller, who suggested that I follow my heart and just get on with it. I had experienced a similar thing when I wrote my first cookbook. I tried to get a publishing deal but had doors, ever so gently, slammed in my face.

So I wrote the book anyway, took photographs, leaned how to use Quark express, designed the book, got it printed and started selling it. The proof of the pudding was in the orders and it sold like hot cakes. The phone then started to ring with offers from publishers and I was able to choose who I entrusted my precious books to.

But this was only possible because I had proved a point – to myself as much as anyone else. Umm – a good approach me thinks!

So, in this climate, I have decided, again, that I need to put my money, or rather my energy, where my mouth is. I see an Internet show as the perfect solution as it allows me the freedom to explore my creative ideas further and see if they work in practice.

With the Internet working as it does and the popularity of social networking, I believe we can bring on-board a substantial viewing audience. Indeed, many videos online reach far more viewers than some primetime TV shows.

The difference between my project and a TV show that is repeated on the web, is that with the web comes an intimate sense of ownership. Any loyal followers can easily feel part of the experience; they can give feedback, ideas and real-time criticisms.

Also, in reality, production costs are low and I don’t have to adhere to the strict advertising laws enforced in television, I hope to prove a viewership, and secure funding for the show through sponsorship.

Luckily, I have a good working knowledge of what needs to be done and for all the areas that I’m unsure of, I have had offers coming thick and fast from professionals who would like to be involved. Dogan is taking care of all the technical production. He plans to keep production costs as low as possible whilst ensuring that the quality is of broadcast standard. He tells me that the material will be generated in HD quality 1080p.

He plans to act as director, initially, especially as this is a project that will be a little organic in its development.

However, it’s crucial that we bring on board a great editor, as this will obviously affect the final look and feel of the show. I know what I want to do in front of the camera so as long as we find the perfect location and can entice some passionate guests – we’re off.

It feels great to be in control of my own destiny and embark on a project at a time and in a place that suits me and my other commitments. The interest and momentum is building daily. They say that flowers need the right environment to grow, and its true. But it is up to us to decide where and when to plant them to give them the best possible chance.

Sally Bee ~ A Passion For… will be broadcast at www.sally-bee.com