Features & Opinion15.06.15
Clangers: behind the scenes

The team behind the new Clangers series had to bring the show up to date without losing its classic charm. Jon Creamer reports

For such tiny moon mice, the Clangers have had a very big impact on the nation’s consciousness.

The series, created by writer, animator and narrator Oliver Postgate and modelmaker and illustrator Peter Firmin, ran for just 26 episodes (and a special) on the BBC between 1969 and 1972, but it remains one of the best loved British children’s animations of all time.

Reviving it for the modern age then is a tough call. How do you update a classic without losing its original magic?

The team behind its reincarnation reckon they’ve cracked it although “we were nervous,” says Zoe Bamsey, Coolabi director of development and production. “You’d seen things like Bill and Ben and Andy Pandy come back and they hadn’t resonated.”

The key to making it work was involving, and getting the blessing of, the original creators. Postgate died in 2008, but Coolabi exec producer Dan Maddicott who had been a long time friend of Postgate and Firmin, began discussions with Firmin and Oliver’s son Dan about what the new incarnation should be. “Once the possibility of doing it came up, we got talking in detail to Dan Postgate who inherited the catalogue and Peter and after a very long time of chatting and discussing we agreed it could only be done if it was done absolutely ‘right.’”

Factory, the Altrincham based animators behind Fifi and the Flowertots, Strange Hill High and Raa Raa the Noisy Lion among others were then brought on board to help build the show and brought Firmin into that process.

And he brought some original source material. Firmin crucially still owned three of the original Clanger characters as well as the Soup Dragon, Iron Chicken and other props and crucially, one of Major Clanger’s armatures “At the time they produced that themselves in the workshop using bits of Meccano and filed wood,” says Factory’s md, Phil Chalk. ”It’s surprising the amount of dexterity you can get from that original armature. The range of movement was extraordinary given the low fi materials they had back in the day. We just brought that up to date with a modern armature from MacKinnon and Saunders, we’ve replicated those movements but made them more repeatable.”

But says Maddicott, “although the technology has moved on, we’re still using absolutely traditional stop frame characters.” After all, it’s pointless making it too slick. “With stop frame you don’t want to disguise the fact that it’s stop frame otherwise it begs the question, why do it?” says Chalk. “We want to maintain the integrity of the original.” So the characters and their costumes are all hand knitted. “We have a full time knitter in the studio to make sure the puppets are pristine in front of the HD cameras,” he says. The Clangers are all reskinned every two or three months to ensure matching colours and that “the integrity of the knit is maintained throughout.”

What has changed is the speed of the process though. Postgate and Firmin would produce much more animation in a day back in the DIY days of the 60s. “Back in the day Oliver, with Peter supporting him, would animate everything himself and would produce five minutes of animation a day in the shed. Now we’re producing just over a minute a day with six animators and full support crew in studio.”

The speed of production also comes from a desire to keep the feel and texture of the original. “We’re trying to be as faithful to the original as possible so we’re shooting as much as is humanly possible in camera,” says Chalk. The push is to eschew cg and use traditional animation rigging for movement, keeping backdrops in camera to a large extent too. “This is one of the most ambitious animations in terms of the scale of the backdrops and sets the company’s ever done,” says Chalk. 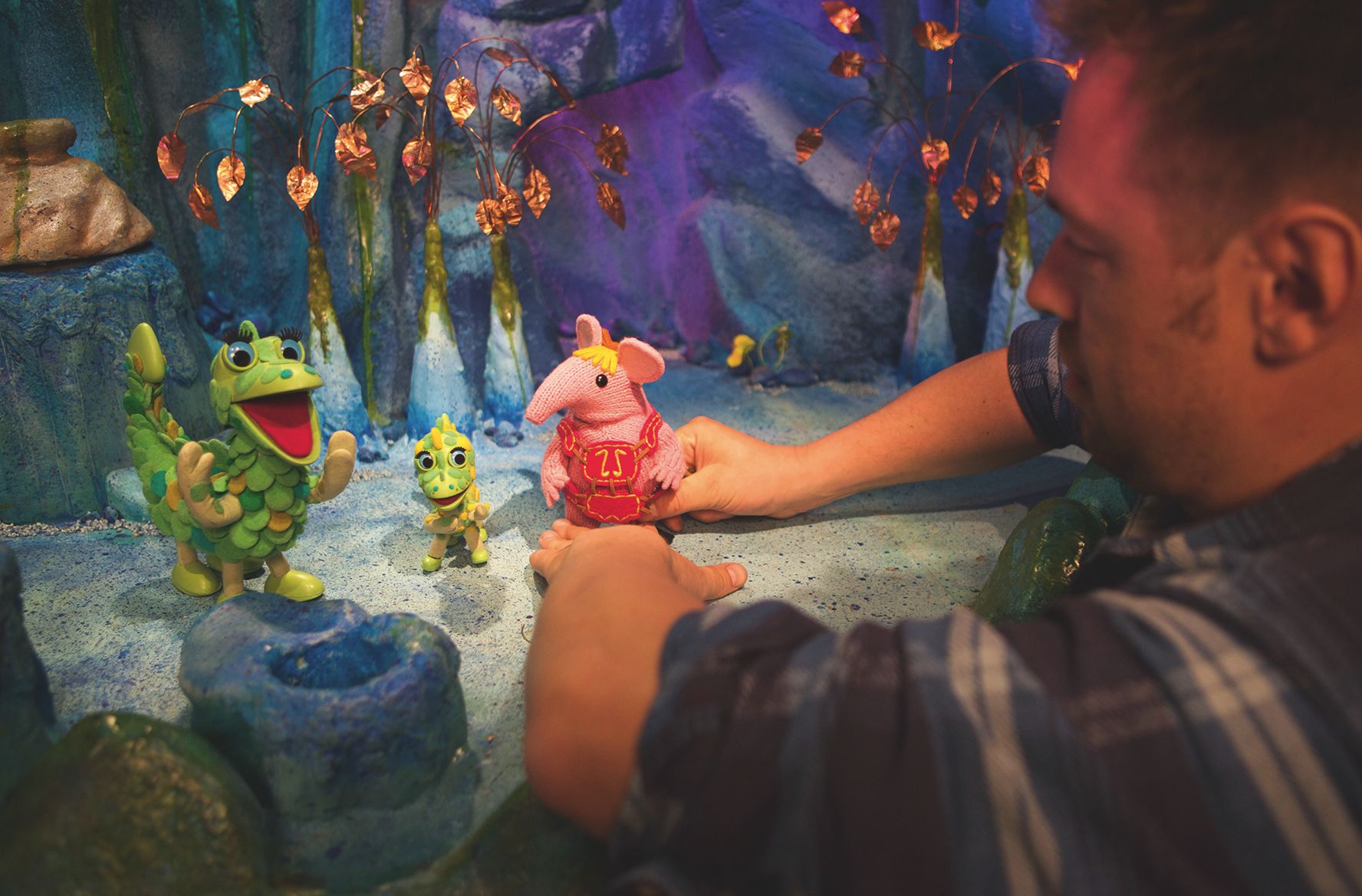 The ‘Living Cave’ measures 16 feet across, 12 feet deep and eight feet high “and that’s compared to traditional stop frame shows that take place on an 8 by 4ft tabletop set. In cg sometimes there’s a disconnect between the physical and the digital” aspects so “we’ve tried to ensure we’re capturing all the textures and strata of the various surfaces within the Clanger planet. You can only really do that by creating them physically.”

details
Clangers is a brand new version of the classic children’s stop frame series that first broadcast between 1969 and 1972. It was made by Smallfilms, the company created by Oliver Postgate (writer, animator and narrator) and Peter Firmin (modelmaker and illustrator). The new show is produced by rights holder Coolabi and animation house Factory