There’s millions of pounds of funding available in the nations and regions for film and TV productions. David Wood reveals who has the money and how producers can tap in to it

England
There are three key regional funds for programme makers to tap into in England. The biggest fund outside of London is Screen Yorkshire which has £15m composed largely of European Regional Development Funds (ERDF) money and has funded a total of 27 films since it launched in February 2012. These projects are estimated to have injected over £21m into the local economy.

Head of investments at Screen Yorkshire Hugo Heppell expects to make £4m of investments this year spread across ten different projects, although what will happen in 2016 is less certain.

To date ERDF money has been distributed through nine English regions, of which Yorkshire was one. But these will now be broken up into 38 Local Enterprise Partnerships, which will see government working with local business over much smaller geographical areas.  Another uncertainty is to what extent the UK government, which has backed the creative industries through its tax credits scheme, will support less recognised areas such as the North East or the Midlands over London and Manchester. Says Heppell: “The crucial question is whether that remains London-focussed or whether there is a genuine willingness and desire to see the creative industries grow across the UK as a whole.”

To further underline its ambition in the north east, Screen Yorkshire is opening a major new studio space at former RAF site Church Fenton, a 100,000 sq ft studio space. Heppell explains the logic: “It’s about pulling things and people together and making things happen in the region.”

“Yorkshire Studios can help to do this by bringing in major productions. A big series such as Game of Thrones has made a big economic and social impact and transformed the creative industries in Belfast. A studio can do that if you get the right productions in because of the consistency of work they can provide to a lot of people.”

Elsewhere, funding body Creative England manages two funds. The first is the lottery based Creative England Production Fund (CEPF) – an annually replenished fund which currently has £750K to invest before April 2016.
It also manages the ERDF-backed West Midlands Production fund, which has £2.8 to spend before the scheme finishes at the end of the year. Recent projects have included Spooks: The Greater Good, The Call Up and She Who Brings Gifts.

Creative England senior film executive Richard Holmes explains: “CEPF is ‘regional, regional, regional’. Which means that it’s intended for filmmakers who live there to make a film which is set there and which is also about the region in some way. We can put in between £50k to £200k – and the maximum production budget of a qualifying film is £2m so it’s really aimed at new and emerging filmmakers.”

“If you are established filmmaker you might be too big for CEPF, in which case the WMPF would be more relevant, which is much more commercially-focussed ERDF investment.That can be £100k to £1m – the idea being to bring film and high end TV drama into the West Midlands, build up an infrastructure and to get us our money back.”

The outlook for regionally-based TV drama grew brighter again this summer when Creative England teamed up with Canadian sales and distribution giant Entertainment One (eOne) specifically to develop and finance a TV drama slate from regional producers in the UK.

Scotland
Things could finally be looking up for Scotland’s beleaguered film industry, which has for years played second fiddle to neighbours in Northern Ireland, England and Wales. To date Scotland’s success as a film destination has been held back by a limited amount of incentive funding and lack of infrastructure ­– particularly a shortage of studio space to support film and TV production.

As it stands agency Creative Scotland oversees a £4m lottery film fund for 2015-16 which is stretched over a wide remit from development, to production funding and support for filmmakers at markets and festivals.
But Scottish culture secretary Fiona Hyslop has raised hopes by recently pledging a a multi-million pound inward investment fund to match those available in the other nations and which would at least double size of the £4m Creative Scotland fund.

Creative Scotland’s director, film and media Natalie Usher has said: “Everyone in the UK has the film tax credit or high-end TV tax credit but if a nation has an additional pot of funding that makes it stand out from the rest – plus Scotland has fantastic crews and amazing locations – you can create a package that is very compelling.”

Creative Scotland’s much publicised Film Strategy 2014-17 document also prioritised the creation of a film studio for Scotland to act as a focus for activity. Creative Scotland has ring-fenced £1m of investment for the studio, although at present plans have yet to be made concrete.

What the Scottish film industry needs more than anything now is a big tentpole success story such as England had with Harry Potter or Northern Ireland pulled off with Game of Thrones to really put it on the map. More productions such as US network Starz’s TV series Outlander ­– backed by Creative Scotland and which added £20m to the economy in 2013/14 – will be a step in the right direction.
Creative Scotland distributes funding from two primary sources, the Scottish Government and the lottery.

There is also a £1m Screen Skills Fund which film and TV has access to plus a film, high end TV and animation tax credits advance facility to the tune of £2m for the period 2015-16. 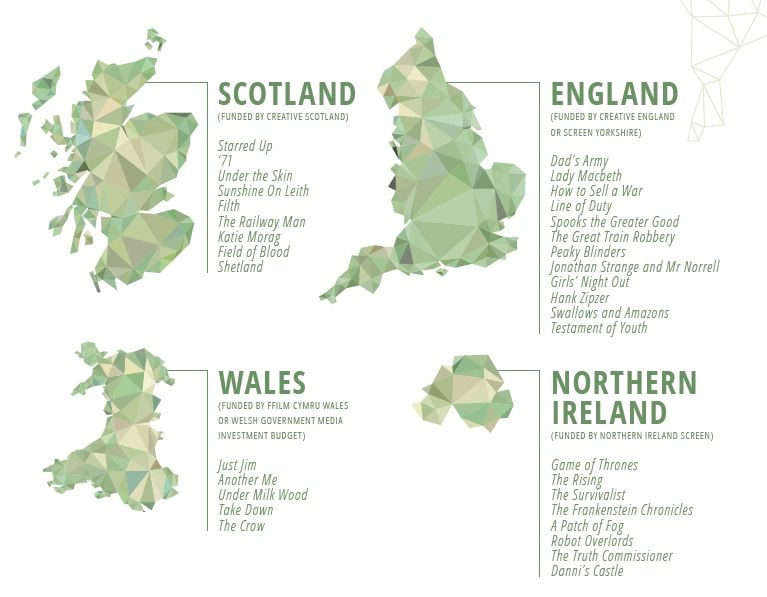 Wales
The Welsh government’s twin-pronged offer of studio space tailored to film and TV production paired with the availability of investment funds for projects that conduct over half of principle photography in Wales seems to be bearing fruit.

The 180,000 sq ft Pinewood Studio Wales facility in Cardiff recently signed up the multi-million pound theatrical reboot of horror film The Crow to add to feature Take Down.

Pinewood marketing chief Andrew Smith reveals the studio is also actively looking at “high end TV projects, now that the high end tax reliefs are in place for TV”, with announcements expected in this area soon.

Pinewood, which manages the £30m Welsh government’s Media Investment Budget as well as the £25m Isle of Man fund, has also announced its ambition to manage new funding pots, with the forthcoming Scottish fund designed to attract inward investment a likely new opportunity.

Funding body Ffilm Cymru Wales also has a pot of lottery cash to spend, although there are more strings attached to these awards. It is prepared to fund projects up to £200K, and a further £100k is available via Ffilm Cymru Wales’ new Magnifier scheme, aimed at supporting project costs such as digital development or the exploitation of IP.

Productions need to have partnership funding in place and Ffilm Cymru Wales will co-finance alongside other lottery bodies including the BFI, Creative Scotland, Northern Ireland Screen and Regional Screen Agencies, provided the lottery contribution does not exceed 50% of the total.

Qualification criteria for successful lottery funding include the quality, potential and originality of the work, the benefit to Welsh filmmakers and the depiction of Wales and Welsh life.

Northern Ireland
If you were writing a book on how to build a production industry you’d probably want to take a close look at Northern Ireland, which offers a perfect case study in creating a viable infrastructure to support a thriving film and TV industry.

Incoming productions shooting entirely in Ireland can now theoretically access relief on 100% of their budgets via the Irish and UK tax credits. They are also eligible for further production funding from the Irish Film Board and Northern Ireland Screen.

Northern Ireland Screen, which was an early funder in the Game of Thrones, now has an impressive £42.8m funding pot which came into effect last year and runs until 2018. This is forecast to add £250m to the local economy through inward investment films, animation, TV drama, factual/entertainment TV and indie film.

The money comes from a range of sources including the Department of Enterprise, Trade and Investment, lottery funding and the BFI.

Northern Ireland Screen is looking for productions which contribute to building a sustainable screen industry in Northern Ireland and which can show a direct economic benefit to the region.
Projects must be commercially viable and able to demonstrate clear possibilities for commercial exploitation.

The Northern Ireland Screen Fund, for feature film, television and digital content production funding, can invest a maximum of £800,000, up to a ceiling of 25% of the overall project budget. However, very few projects are awarded the maximum amount.

Incoming productions will be required to spend a proportion of the total production budget in Northern Ireland, with the funding body outlining different spend ratios for different types of media.