Features & Opinion13.06.19
The Planets: Behind the Scenes

For the BBC’s latest landmark science series, the show set itself the task of telling the entire story of the solar system from its birth until now and on to what will happen to it in the future.

Ambitious in itself, but the show was envisaged as more than just an explanatory science doc. “From the very beginning we conceived this series as both drama and documentary,” says exec producer Andrew Cohen, with the individual planets treated as characters with their own distinct narratives.

As well as being a genre hybrid, the show’s action is a mix of elements too. Fronted by Professor Brian Cox, the series combines live sequences of the scientist in locations akin to the planets he’s talking about, blended with vfx of planetary events, archive footage of space explora-tions, cg builds and immersive sound design. 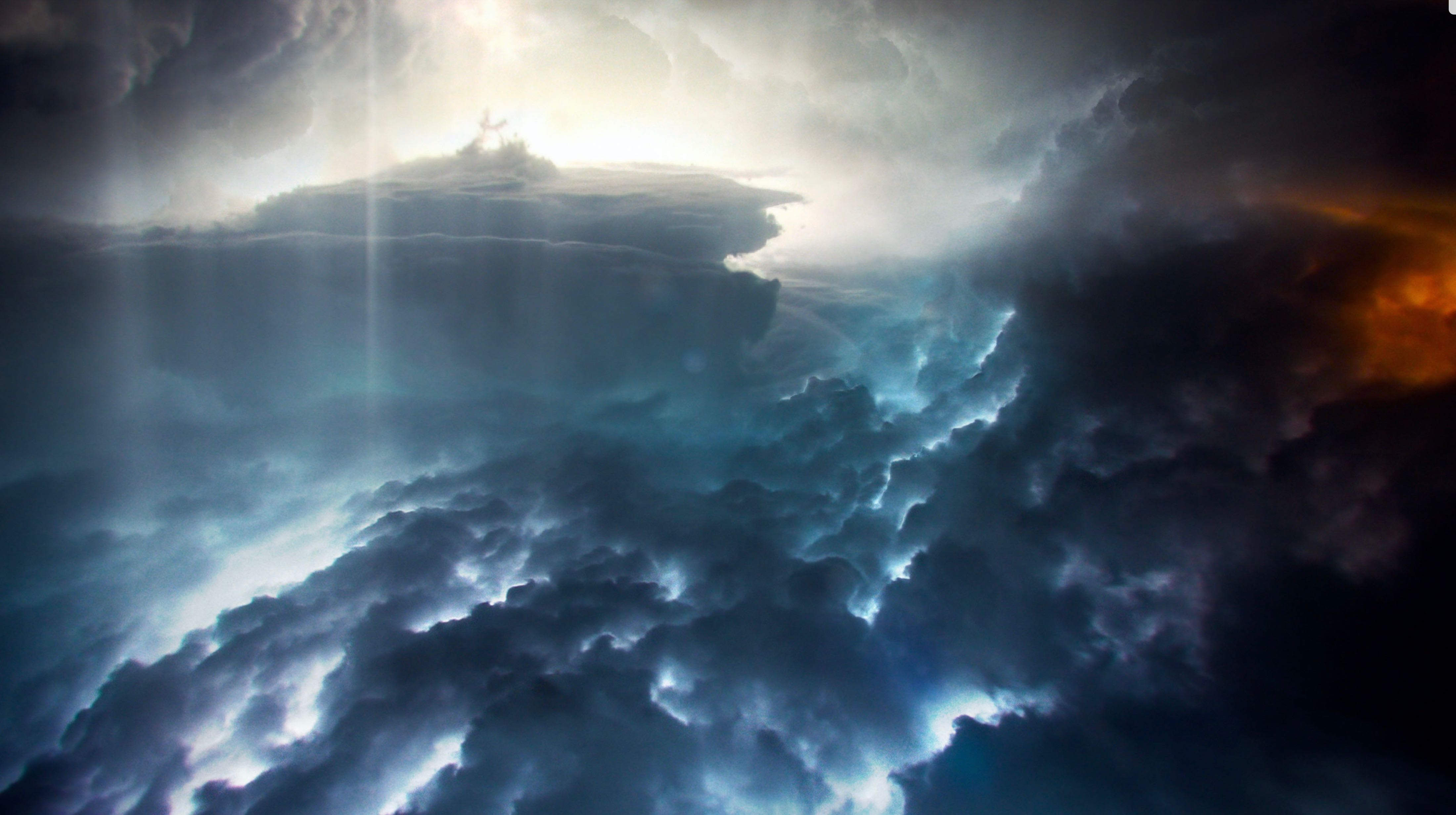 For dramatic effect
And to deliver on the show’s dramatic ambitions, the vfx had to evolve beyond the standard science doc format: “To deliver the sense of drama that we wanted in this series we needed to completely change the approach to our visual effects,” says Cohen. “These are not just graphics that explain things to the viewer instead they are an experience that takes you across the solar system and back in time so that we can become completely immersed in our story.”

The process began, says series director, Stephen Cooter, with the production team and vfx house, Lola Post, storyboarding all the key effects sequences pre-shoot and then deciding “which shots would be entirely computer generated, which would incorporate backdrops or foreground elements shot on location, and which would be pure, treated, cinematography. And then it was down to me and the other directors to bring back the elements and deliver them to Lola” where the vfx process could begin in anger.

The look of the vfx is a hybrid too. They had to be dramatic, but grounded in scientific reality (and complementary to the in-camera footage). Shots couldn’t be fluffed up with imagined nebula and background galaxies, but then, at the same time, much of the action is of events never seen by humans, which left space for imagination. “So it’s a nice blurry line,” says Lola’s creative director, Rob Harvey. Inspiration for many the vfx shots of human space exploration came from early Soviet and NASA archive. “It’s really unique stuff and it was all on black. You don’t get any stars. It’s odd framing. they didn’t have view finders on the cameras.” The aim was to make the vfx look “as photographic as possible, so the camera moves are sensible. There are pans, little crane moves, tracks but nothing really mental. It had to be based on what a drone could do or a satellite could see.” Any vfx based on probes or landers was created as though a GoPro had been bolted to the craft. Those shots were interspersed with real footage or stills of the launches and “it’s quite hard to spot where our stuff finishes and the real stuff starts,” says Harvey. “You keep the flow going so it’s not like ‘cut to CGI’ or ‘cut to wacky sequence.’ We aimed to make it look as though it could possibly be a bit of real footage.” 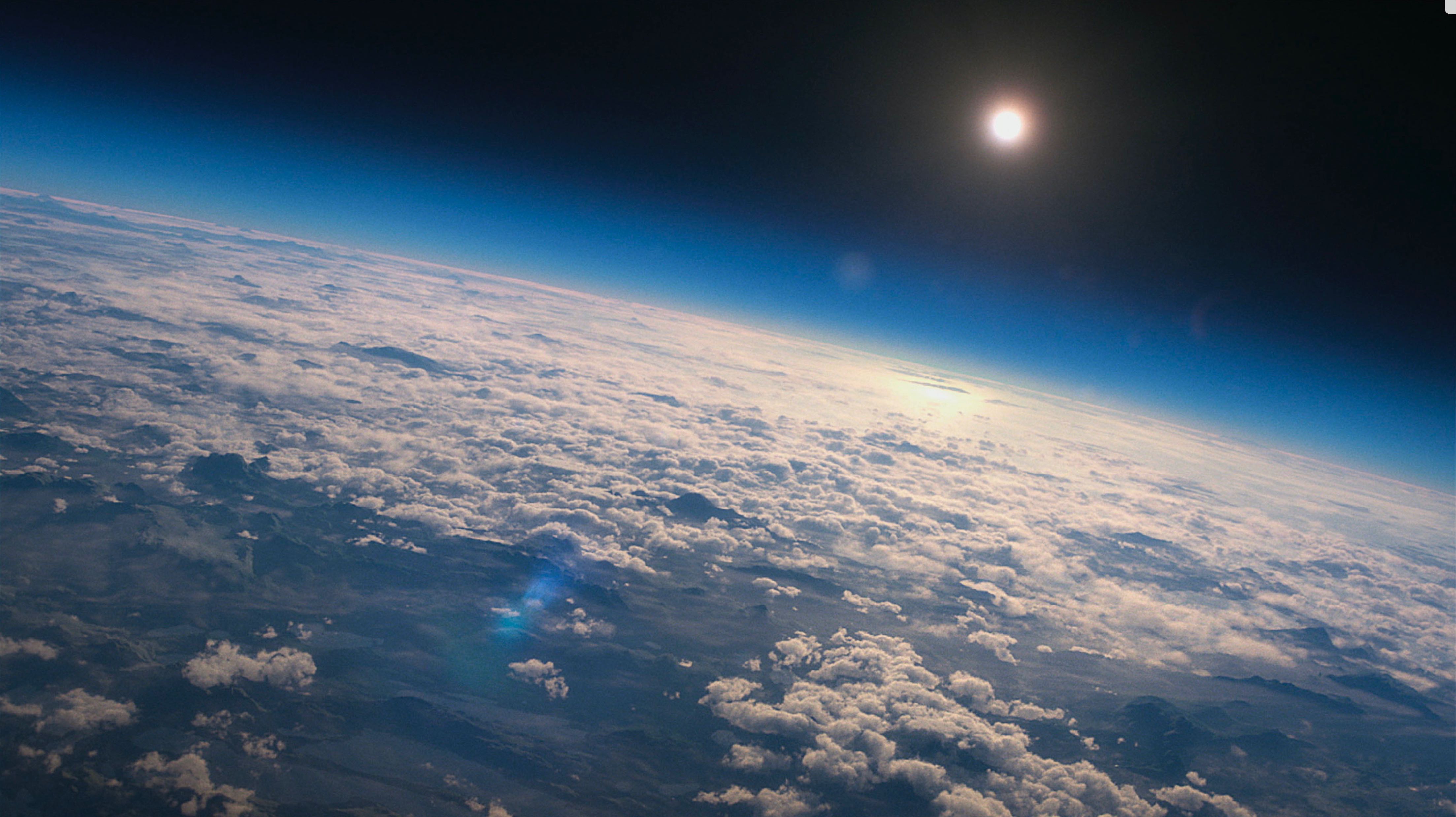 Keeping it real
That grounding in some sort of reality led further into the vfx, with much of it created in-camera using a host of old-school physical effects in the studio which was then combined with the shot plates or wrapped around CG models. Physical effects helped to preserve the ‘reality‘ but budget and time constraints were a factor too – 20 minutes or so of vfx per episode on a documentary budget meant some clever work arounds had to be created to pull off a high-end landmark BBC look.

Shots include a drop down through Saturn’s thunderstorms complete with diamond rain. “To do that in CGI would need a ton of R&D a whole load a simulation, a load of rendering,” says Harvey. Instead , Harvey worked with special effects studio Pirate for many effects “mucking about and making a mess. If you pour boiling water into liquid nitrogen it generates massive cumulonimbus clouds that then condense. You shoot it really high speed and then you put these old flash bulbs inside the clouds on a stick.” Diamond rain was created by pouring a type of  Perspex mixed with dust from a section of guttering – “it just looks really lovely and twinkly and Dia-mondy.” The surface of Saturn and Jupiter, the gas giants came from a tray full of Hammerite paint with petrol and solvent tipped in. “It’s absolutely stinky but you just get the texture that you’d never get in a computer and you wrap that over the top of your cg model as a layer. It gives you more depth.” 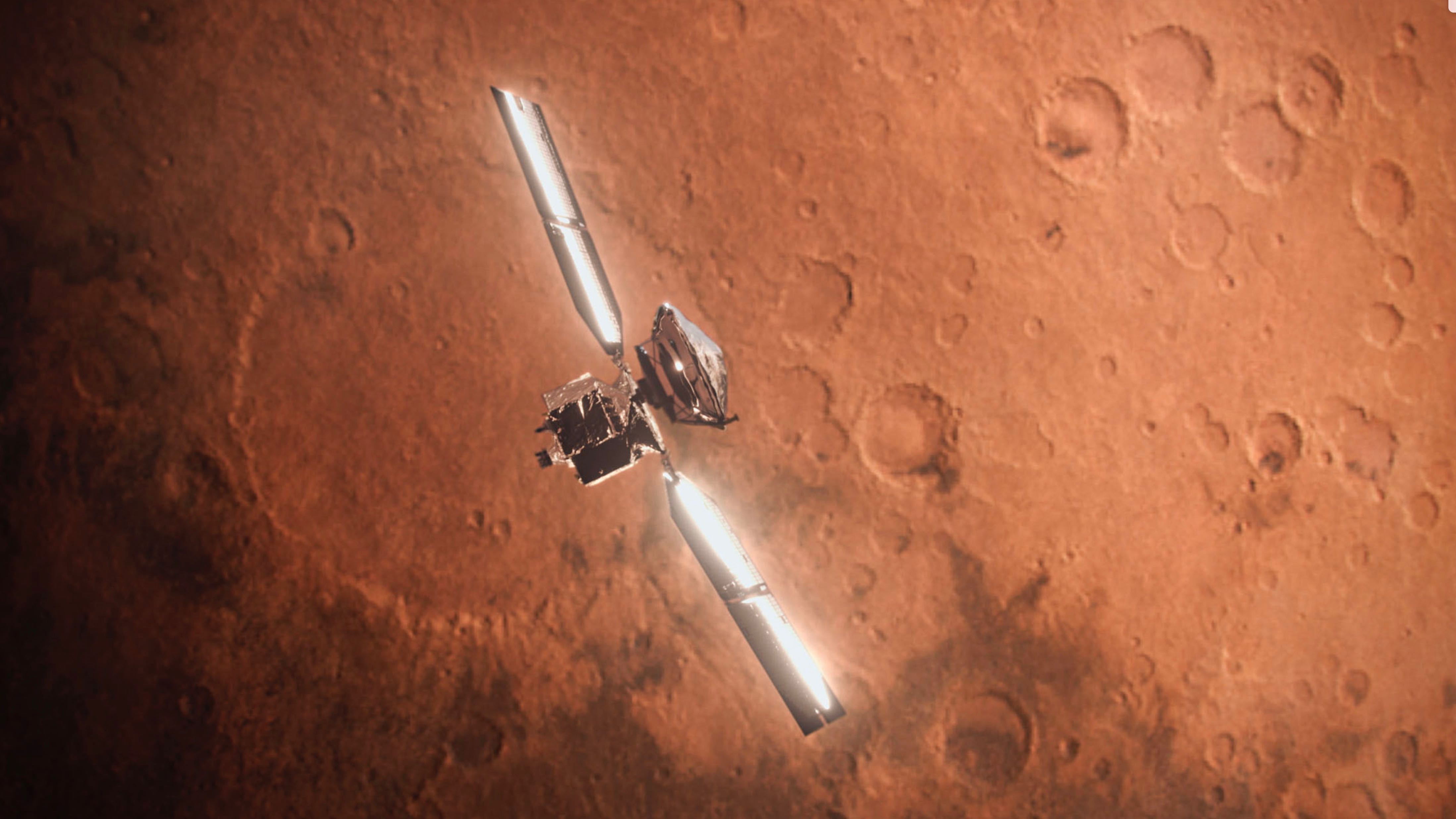 Other effects include rain evaporating on the surface of Venus created using a camping stove hot plate. “It tells the story and it looks really photographic and beautiful and real because it is.” Air cannons shooting various mixes of dust and powders generated early universe shots too.

The chaos of physical effects also adds to the realism, says Harvey. “If you’re shooting a desert plate in Oman and you’ve got to make it look like meteor strikes, rather than generate that in CGI we grab little snips of stuff from our library. We use those elements to fill in the background of the plate, but then add all the high-speed studio stuff in. It gives you all the dust and atmosphere, and it’s real so you get happy accidents with the way particles collide or break up or interact with each other. It’s something tangible and believable whereas if you do that in cg there is a point where it just looks cg after a while.” 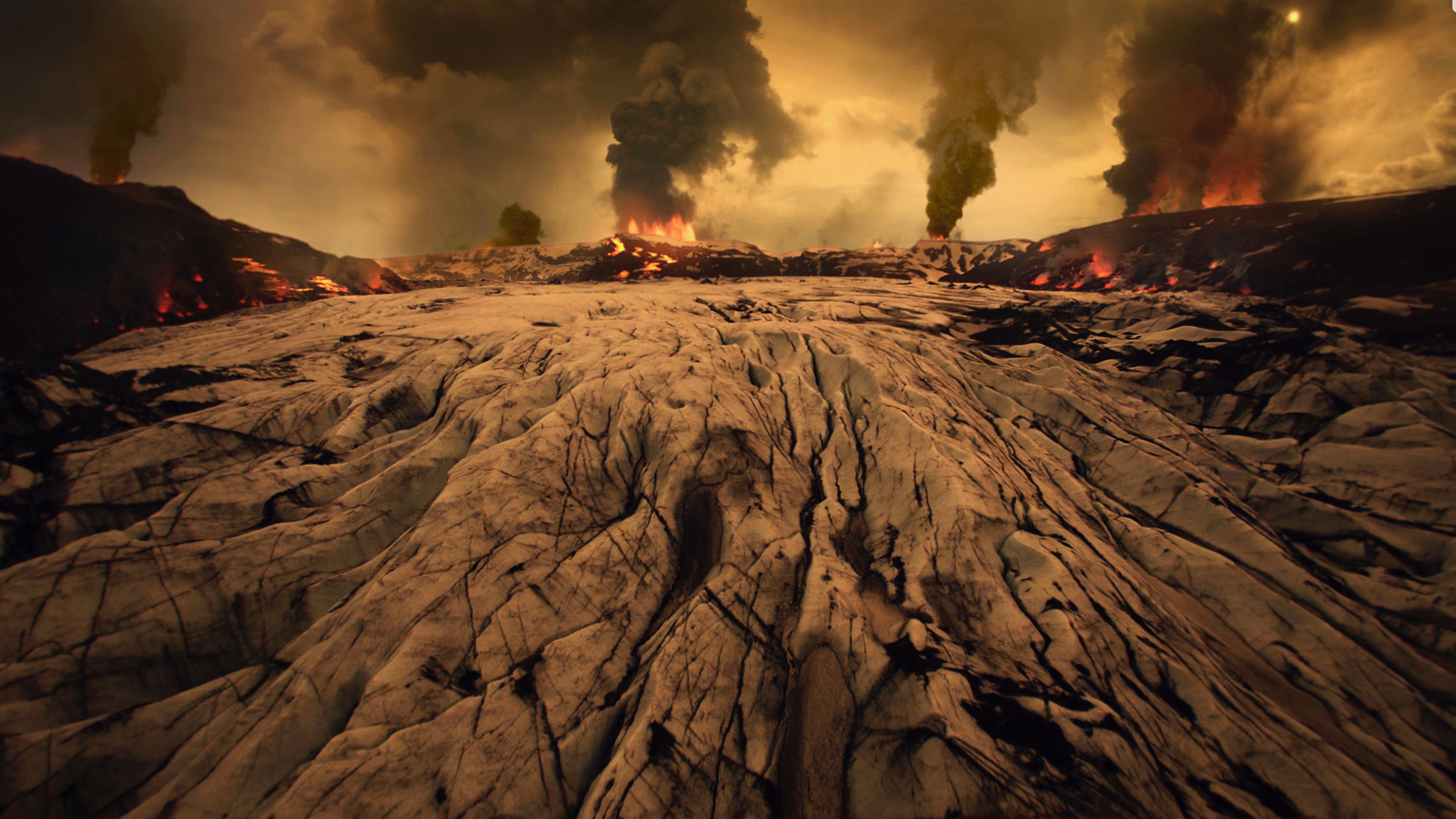 Sound ideas
Sound was also a big part of the series and completed at Halo along with the picture post.  It’s a “very vfx heavy show, a lot of the science is quite out there. The visuals on their own needed help in places to sell the ideas, ” says dubbing mixer, Rich Addis. The sound design was, like the vfx, grounded in a reality . Nasa radio astronomy recordings were used as a basis for much of the planetary sounds throughout. “They take radio waves into the audible frequency range. They’re not technically sounds but they are wave forms originated from planets and stars transposed into audible human range of hearing,” says Addis.

Alongside that, Halo also worked closely with location sound recordist, Andy Paddon, using the extensive recordings he collected from the various deserts, mountains, fjords, volcanic craters and frozen wastes that Brian Cox’s commentary was filmed in. “It was nice to have genuine sounds,” says sound designer, Jay Price. “There were lots of recordings of cracking ice and more abstract recordings which we could manipulate. A lot of the sounds were built from location recordings instead of off-the-shelf stuff. They were quite bespoke.” And as many of the stories are about the various planets’ similarities to Earth, especially the ‘terrestrial’ planets “having the sound grounded in the real and familiar really helps to sell the idea that these places were at one point very similar to the earth of today,” says Addis. “If you take something that is real then you mess with it, screw it up as much as possible, it sounds other-worldly but based in some sort of realism,” says Price.

As with the vfx, the sound design also had to represent planetary events that nobody has ever witnessed. “For the gas planets in the later episodes then it gets a bit more abstract,” says Addis. “There’s nothing solid so we had a bit more creative licence there.” Part of that involved “forever descending sounds as you’re moving further and deeper into the planet,” says Price. “It’s giving a sinking feeling sonically. Christopher Nolan used it a lot for the Batpod in The Dark Knight and he used it in Dunkirk a lot too.”

Another feature of the sound design was also the choice to often have an absence of any sound at all at certain moments. “There are huge moments when the visuals are big and stunning, the score is going great guns and we had huge sound designs but there are also really good, bold choices of taking everything out almost,” says Addis. “Huge planetary collision sequences where after the initial impact it just cuts to silence and you’re just absorbing these incredible visuals.” 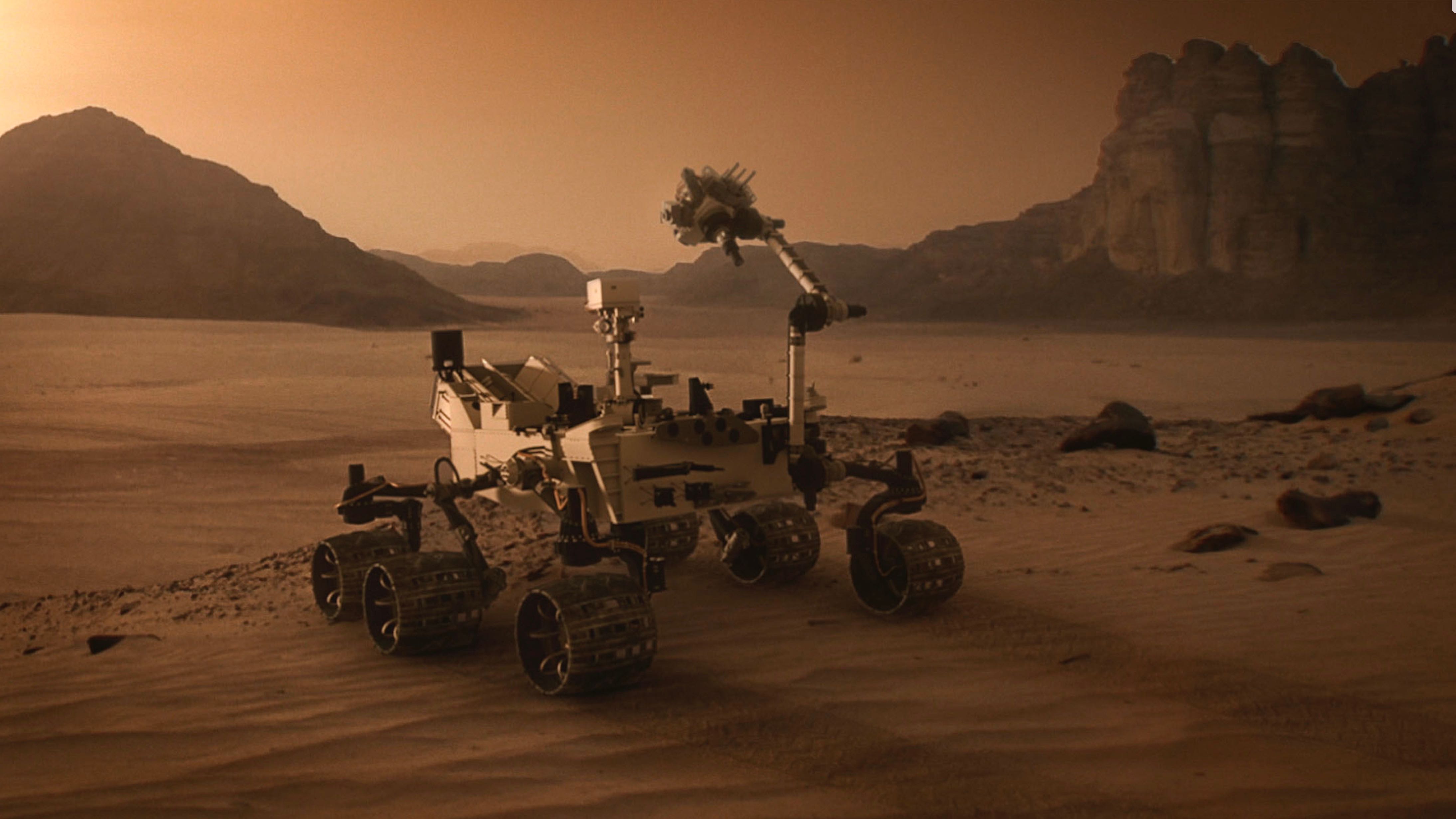