The editors behind Harry Potter, Toy Story 3, All That Jazz, The Trip and Sherlock tell Jon Creamer about their creative approach ahead of this month’s Editfest London 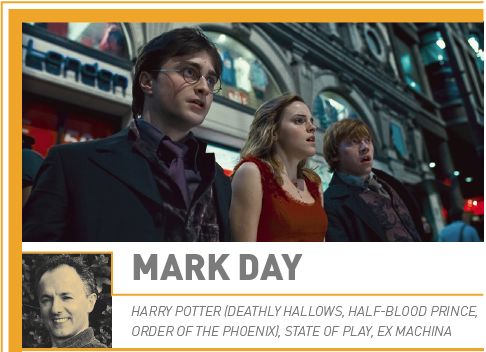 MARK DAY: “You have to forge a relationship with the director very swiftly. You’re going to be working with this person for hours a day for months on end.

When you get the dailies you do your version of the scene. That could be totally wrong, but you have to go with your gut instinct. It’s quite nerve tingling showing your work. Even with [director] David Yates who I’ve worked with for a long time, you’re still nervous you may have misinterpreted what he wanted.

You’ve got to have empathy with the characters you’re editing and with the script. Hopefully you’ll love the script you’re working on.

When a script’s written it’s one thing, when it’s filmed it becomes another and when it gets into the edit it changes again so it evolves over the months you work on it.

Patience is one thing you definitely need as an editor and diplomacy obviously. Sometimes you look at something and you think, ‘That’s not a brilliant scene you’ve directed there,’ but you don’t want to say that to a director especially if you don’t know them very well. It’s amazing what you can do to change a scene by re-editing. It can make a bad scene pretty good and a good scene brilliant. But you’ve got to be diplomatic.

I’m sure some directors are total autocrats and don’t listen to a word you say no matter how much you try to help them. Luckily I haven’t worked with people like that but I know there are people around who are like that.
For the first assembly you want the director to see everything that was shot and the whole script as it was written. That’s when you discuss it closely and scenes start to go.

Over the weeks or months it gets moulded into shape and then you show the producers and they have ideas on it and you cherry pick from those ideas. That’s what’s good and collaborative about filmmaking. Some people think nobody else can have a good idea but show a film to anyone and they’ll have some idea on how to improve it. Sometimes you can’t see the wood for the trees because you’ve seen it so many times.

With vfx heavy films you get pre-vis to use as a guide. Then you pass that back to vfx and gradually over the months it will evolve and the character becomes lifelike. When I first started on Potter it was weird but I’ve done it a few times now so it doesn’t faze me.” 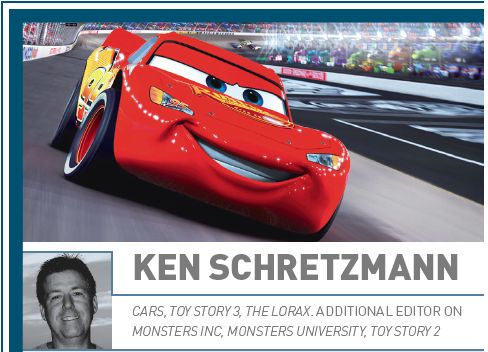 KEN SCHRETZMANN: “On live action they shoot first and you edit later, on animated films you edit first and they shoot later. The films take about four years and the first two are just editing storyboards.

In animation nothing locks down. You have to accept that the cut is in constant flux and not even under your control.

The beauty of working in animation is if I’ve got a two shot but what I really need is a close up I can just make a phone call and they’ll give me a close up. Or I can say this is all great but let’s nudge the camera over. Unlike live action where you’re stuck with what you have I can constantly ask for things that  I need.

In terms of pacing, when you see multiple characters in the scene all the dialogue has been recorded separately on different days. As the editor, all that pacing is where I’m placing dialogue and deciding where action happens. I’m not relying on the actors’ pacing I’m building that from scratch.

Editing animation is a marathon. You have to approach it differently as an editor. You can’t just be working long hours and burning yourself out.

The most important things are a story sense, getting in synch with the director’s vision and understanding what you’re trying to accomplish with the latest revision of the script. A lot of it isn’t even technical, it’s being sensitive to the dialogue and rhythms of speech.

I come from a live action background and I was used to having discussions with the director alone behind closed doors. At Pixar, you never get alone time with the director. It’s usually you, the director, the story artist, a whole team of people in the back of the room watching you guys. There’s a whole formal review process where you’re showing cuts and discussing it and everything’s in public. Every time a director says something a whole bunch of people are in back taking notes because everything ripples out to other departments.

Sometimes it’s hard to say that the work is mine because so many hands have been on it. I would like to try a small live action film just to have the simplicity of having a choice of five takes and it doesn’t change. You can cut it and it stays there. Also looking at the screen and reacting to actors faces. Leading up to animation I’m cutting things imagining what it’s going to be and waiting for the day of actually seeing that performance.” 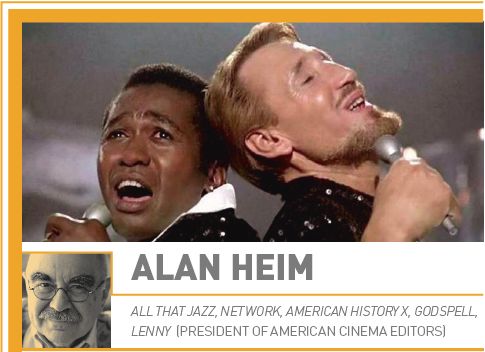 ALAN HEIM: “A good editor trusts their initial feelings when he or she first sees the dailies. You must be open to flexibility and be willing to rearrange and change almost anything.

The editor is interposed between what was shot and what the director thinks he shot so a certain level of tact and patience is required.  That doesn’t even include the producer’s input, which can be strange.
Storytelling is the key to editing and I like to tell a story with as little exposition as possible. It confuses the audience.

I usually cut a full-length version while shooting is going on, which includes all scenes, even when I’m sure certain ones will go. Then the director will look at it and consider another occupation, at which time the tact comes in and we settle in to making the movie move.

Editors like to think of the process as the “final rewrite” so it really is a key part of the film where some errors can be covered or removed.

Good editing fits the material.  Film, digital or not, is a plastic medium and it can’t be forced where it doesn’t want to go. The director of Godspell was thinking of hiring a “flashy” commercial editor to do his project.  I said, “give me flashy shots and I’ll give you a flashy film”.  And I did and we were all happy.” 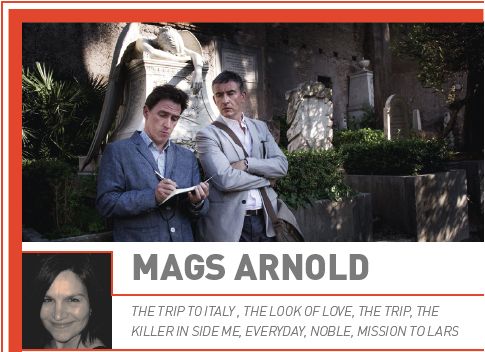 MAGS ARNOLD: “The first-time viewing of the rushes by the editor is critical, because the response you have to those rushes is most likely the response the audience is going to have. You are the first member of the audience.

So, for me, the starting point is watching the material with an open mind, reacting instinctively to the emotional truth on the screen, committing that first feeling to memory and writing it down if that helps because when you watch it again later that first impression has gone. And in the act of manufacturing the cut, technical considerations like lighting, focus and continuity can sometimes supersede that first response.

With film gone, there are no selected/printed takes – everything merits a look. It’s important to watch everything in real time. Some directors shoot cover systematically, for example, a wide, followed by mids, then close ups etc. This makes it easier to remember and locate the bits you liked later on. But others shoot really long takes with the shot changing size throughout. Sometimes the dialogue is improvised and changes occur from one take to the next. This makes it more difficult to recall where the best bits are. If there is a lot of cover, there will be more, harder, choices. Getting to know your material is paramount.

Myself and the director usually try to have a conversation after I have seen the dailies. I find it more useful to watch the rushes cold and as impartially as possible. Talking afterwards is very useful, because I can discover what the director wants, and hopefully, between his vision and my reaction, we are off to a good start with the assembly.

The editor has to tell the director that something might not be working. You are duty bound to let them know as early as possible that you have concerns. This is one of the most perilous parts of the job. It often causes you great stress, particularly when working with a director for the first time.

An editor needs an organised mind, a great memory, good sense of rhythm, resourcefulness intelligence, a sense of humour (especially for comedy), the ability to work with other people without being an asshole, to not be an egoist, to stay calm and see the bigger picture (often literally) and diplomacy.

A good edit is when the emotional as well as technical reasons for an edit coincide. No compromises have been made. It’s deeply satisfying when that happens.” 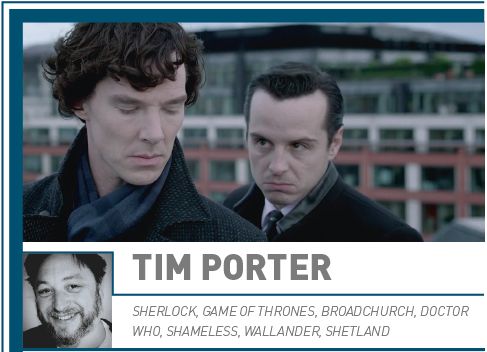 Usually a director’s got a point of reference for either the whole piece or a particular sequence. People reference a lot, it’s a shorthand.

It’s important to know when it’s your turn to say your piece. You don’t want to be the loudest voice in the room when you’ve got all those execs in. They haven’t come to listen to you necessarily. You support the director in those situations.

Showing it is nerve wracking. I’m not the director but I’ve still lived with this thing for weeks and months and you’ve still put your hard work and energy and focus into something.”

The editors featured in this article will be speaking at ACE’s EditFest London on June 21, sponsored by Televisual – www.editfest.com