Pay is always a contentious and divisive subject in TV and production. There’s little transparency or uniformity in pay across the industry, with many people earning different rates for the same job even at the same company.

The Televisual Salary Survey attempts to shed some light on the issue, asking our readers to let us know (anonymously) about their pay rates over the past year. We had over 600 replies to this year’s survey, which form the basis of calculations below.

It is important to stress that they are only a rough guide, given how widely pay can vary for each job. Broadcasting union Bectu is also a good source for minimum rates for certain key jobs.

First the headline findings. The median average annual earnings have risen since last year’s survey, up from £45k to £46.9k. 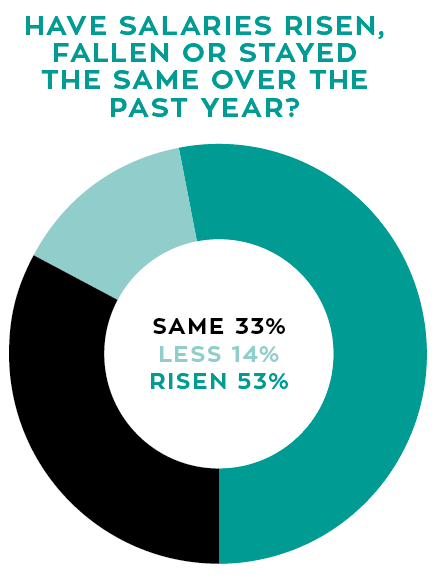 This 4.2% rise in pay chimes with the fact that the majority of our respondents (53%) say that their salaries have increased over the past year, while 33% say they have stayed the same and 14% that they have fallen.

The rise is likely driven by buoyant levels of production in the UK, with plenty of shows in production helping to support levels of pay, particularly in sectors such as drama and film.

Drama is comfortably the best-paid television genre, with a median salary of £55k, well above other genres such as news (£36.5k) or documentaries (£45k). 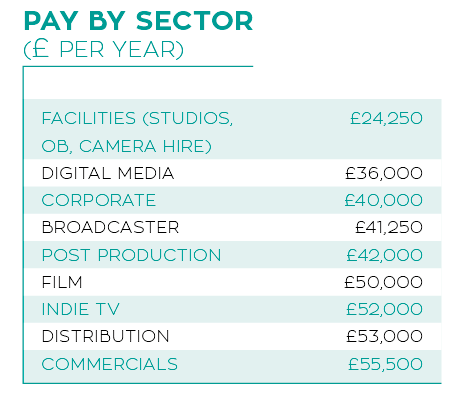 Some of our survey respondents confirm the upward pay trend too. “In drama, salaries have risen with the increase in volume and scale of work,” reports one drama producer, who calls the rise “about time too” after a long period of stagnation.

A freelance editor adds: “Overall I feel that there’s a slow upward trend, or at least I’ve had less people arguing over rates and a more realistic approach to payment. It’s still a struggle to get BECTU minimums but more seem willing to adhere to them, or at least get near.”

Still, it’s surprising how little positive feedback about pay levels there is within the industry. Many say their earnings have risen after flat lining for years – and then only in return for doing much more.

Says one self-shooting director: “The downward pressure on salaries for shooting directors and shooting PDs has eased in the last 12 months or so with the possibility of negotiating small increases. But wages are still below where they where and where they should be considering the hours, the expectations, the responsibilities and the multiple roles performed (camera, sound, directing, producing…) all at once.”

There’s also a widespread belief that salaries have not increased equally. Many in production departments – such as producers, production managers, line producers and co-ordinators – complain that their pay has not increased in line with their editorial and technical counterparts.

Others complain about the “extortionate amounts’ paid to top levels of crew and to top talent. Many in post production also say they are the ones who are most feeling the downward pressure on programme budgets. “Editors pay hasn’t moved for 20 years,” says one editor. “The minimum BECTU rates are £305 per day. Many employers are coming way under, some by £50 a day.” 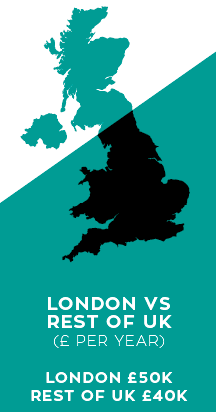 Pay rates in London still outpace those in the nations and regions too. The median pay in London is £50k; outside it is £40k. Our survey shows that the annual earnings of a London based producer director are £55k, while one in Bristol earns £52.9k. Meanwhile, a production manager in London might earn £52k, compared to one in Brighton on £36k.

The high costs of London, however, eat into any perceived pay advantages that the capital might have, say many respondents. “My wage might go up a little when I demand it, but the rising cost of rent and living in London means that my friends and I don’t feel any more well-off,” says one edit assistant on £25k. “My rent, despite being fairly low compared to others, is still over half of my take-home pay. I earn less than most of my friends who work outside of the industry.”

Pay levels at the entry level of the industry remain a huge cause of concern. Runners, for example, earn an average of £11k a year. Says one series producer (on £51k): “I think the pay for runners is shocking and it concerns me how often they work for less than minimum wage due to long hours on a weekly rate. I don’t allow this on my productions but am shocked how indies don’t seem to recognise this issue.”

One runner reports: “There are still companies offering work below National Minimum Wage. Last year, I was offered £425 a week for a rotating six day week on location for a prime time BBC1 programme, which is well known for doing 16-17 hour days. It is getting beyond tedious going to interviews and finding this is what a company thinks is acceptable.”

Many at the lower end of the pay scale say that production is rewarding only for the well connected few. One sound recordist says: “I never find enough work to live on.  A small percentage of professionals get the lion’s share of the work whilst others like me struggle to get a foot in the door.”

And it’s often those supported by the bank of mum and dad who can afford to stay in the business. Competition to break into the industry is so high that employers can offer low salaries knowing that a young person will take it. A runner laments: “The only runners who can afford to progress are the ones bankrolled by wealthy parents. These subsidised runners are our future producers. In 10 years time posh kids will rule TV and output will be one dimensional.” 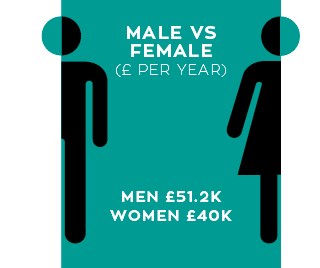 Once again, the Salary Survey highlights that women tend to earn less than men. The median pay for a man is £51.2k, and £40k for a woman. It’s a source of much comment from female respondents to the survey. “I know that less qualified blokes earn more than me,” says one female AP.

A female producer adds: “Freelance women, particularly in the more junior editorial roles, generally ask for a lower rate than men due to less self-confidence in their experience/abilities and less desire to play hard ball on rates.”
This comment only emphasises how the production industry is one where there is huge variation as well as lack of clarity on pay rates. As such it naturally favours people who negotiate hard without knowing exactly what their counterparts are earning. But, hopefully, the Salary Survey has provided a little extra ammunition for that next negotiation.

How our pay survey works
Televisual emailed readers asking them to respond anonymously to our online salary survey. We asked what they were paid in 2016, and for details about their age, gender, job and geography. We had 615 responses in all.

The annual figures quoted in the article are based on median earnings. Some 53% worked full time for a single employer, and 42% were freelance. 48% worked in indie TV, 16% in post and 16% for a broadcaster. 57% of our respondents were men, 43% were women. 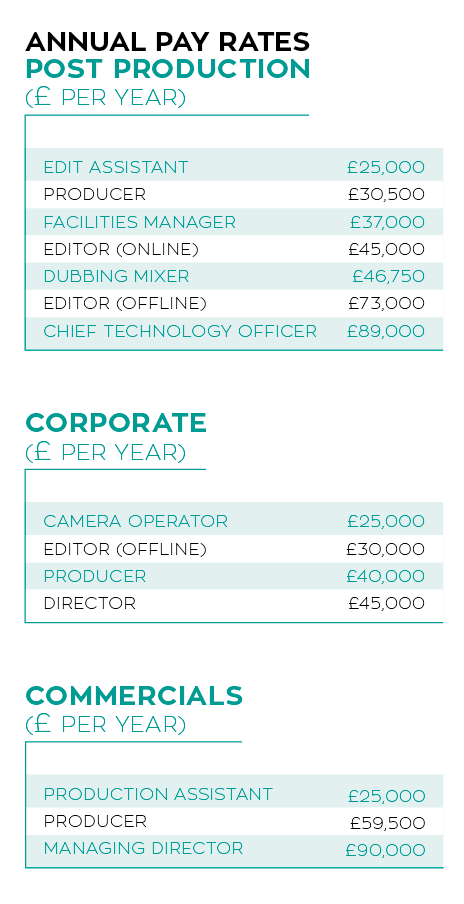 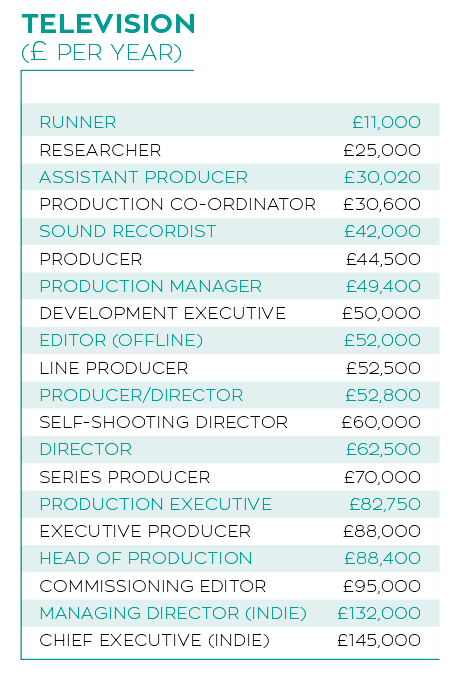 This article was first published in the March edition of Televisual. To subscribe, visit https://www.televisual.com/subscriptions.html