How do you film a man running the length of Britain – and make it interesting? Eoin O’Shea, producer/director at indie Tuesday’s Child, on how a ‘Robocop Rig’ brought a new dimension to Discovery show Sean Conway: Running Britain

Sean Conway’s challenge was to run from John O Groat’s to Land’s End. If successful he would become the first person in history to have run, swum and cycled the length of Britain – the ultimate British triathlon.


For series producer/director, Eoin O’Shea, DP, John Livesey and the rest of the Tuesday’s Child team the challenge was less taxing on the knees and more taxing on our collective minds.

If we weren’t careful we would spend six weeks chasing him down the country, grabbing ‘passing’ shots and covering everything with, pre-run and post run IV’s. In short, it would be dull.

We had a core team of four on location, series producer/director Eoin O’Shea, AP Ruth Campbell, DP John Livesey and DIT Freya Davey who backed everything up on to portable drives. We knew with the amount of footage being generated housekeeping would be critical; otherwise the digitising costs would be higher than the budget!

We also had eight days of additional crew, shooting an F55 who would provide an additional layer of natural history style shots that showed the changing weather and landscape. Woody James would shoot while Jaime Goodbrand ran the sound.

For the run itself, we used body cams, selfie sticks, tracking vehicles and Lec from Z Axis supplied an Octocopter with GH4, which was invaluable. Sean even used his phone. 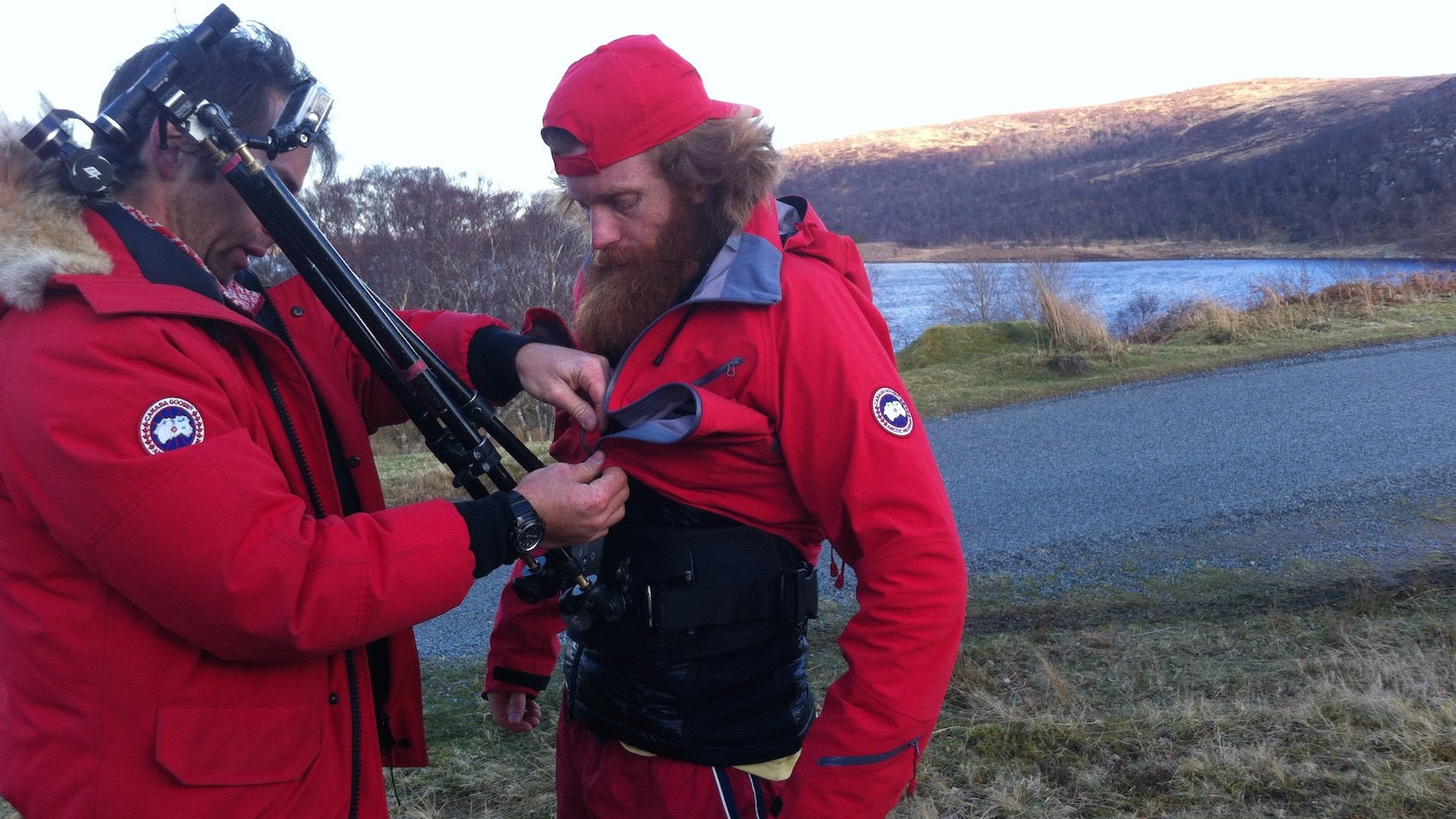 But we also wanted something a little more unusual. This is how the, ‘Robocop rig’, came into being. Initially we wanted a rig that allowed us to be ‘with’ Sean while he ran. The thought was we needed a two-way set up that allowed us to see Sean’s POV while another camera showed us his face. The idea was loosely based on a ‘first person shooter’, video game.

We needed to hold a 3-point frame in position for two cameras and after a certain amount of trial and error DP John Livesey decided to alter an old steady-cam vest.

Though even the gimbal rig wasn’t without its issues: we had to increase it’s processor speed to max in order to counteract the insipient yaw offset which comes with the repeated, aggressive, swinging movement felt out at the end of a body-mounted tripod. Fortunately at highest frequency the gimbal could cope with the movement and gave us what we wanted.

It gave us a great shot but after a bit more, ‘on-location’ editing we realised it could be a great master shot, for a Slow TV version of our film. The first, length of Britain POV!

Sean Conway: Running Britain will be broadcast on June 25 at 21:00 on Discovery Channel.