Features & Opinion26.11.20
Remote editing that feels like being on-premise

The first impression you have when working with ELEMENTS new Satellite editing solution is that it feels just like editing on premises. Your workstation remains the same, but the media is remote and – with an imperceptible five millisecond delay from the host – the experience is more familiar and reassuring than any other remote editing solution. 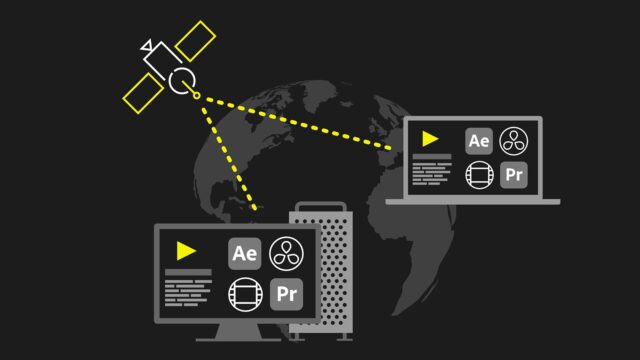 ELEMENTS has built a reputation for working directly with post professionals and ELEMENTS Satellite is a further expression of this M&E-centricity. Rather than just looking at the point-to-point, ELEMENTS have thought about how best to utilise the workstation GPU to create a smoother and faster experience. Security is also industry-specific with AES encryption, two factor authentication and full administrative control.

Post production workflows were always set to be more remote. It was simply a matter of time and of course the C-19 pandemic has only galvanised an inevitable trend. The challenge for post was always having access to high performance collaborative storage.  Even if it was possible to put that infrastructure in the cloud, including the equivalent of dedicated high-performance networking, the same issues of being able to rapidly access and share content from a remote location would exist. ELEMENTS wanted a way to help their existing and new customers that would keep to their trademark Human Centred approach of being intuitive and easy to use, while recognising that the future will most likely comprise of hybrid on-premise and cloud environments.

ELEMENTS started looking at the remote desktop market and realised that much of the IT based solutions was deemed not fit for purpose or at least disappointing from a media perspective from incorrect colour rendition to incorrect spatial representation. ELEMENTS identified technology used in the gaming industry and after some trials with existing customers, responses came back with words like “flawless” and “seamless”.  ELEMENTS went about creating a software-only solution that less than six months later can be used by new as well as existing customers. Recognising the move towards opex from capex, ELEMENTS have gone to market with a cost-effective subscription model that works for small post houses as well as larger broadcasters and enterprises.

MAKING THE BEST USE OF THE WORKSTATION GPU

By using the GPU found in the majority of customer’s Windows and Mac workstations, the H264 media stream of screen information is pushed out onto the internet within 5 msec. This means that a basic laptop over a reasonable connection can directly edit in 4K (and above), filling the entire screen, and connecting from one location to the next.

And for ELEMENTS Satellite A “reasonable” local internet connection means just that. ELEMENTS recommend better than 10Mbit with 30Mbit being ideal and therefore available for most users to operate even between countries. And on top of being able to edit directly in Media Composer, Premier Pro and Resolve among others, the whole host workstation can be controlled allowing for edit assist and other file operations. This can become particularly useful when wanting to move content around without needing to download or upload from the remote location.  In the background a cloud-based broker * handles the security handshaking and provides the browser-based web interface for adding users and allowing access to applicable workstations.

AN EYE TO THE FUTURE

Satellite was developed so that it can also drive workstations in media orientated co-located datacentres and cloud-based workstations that are GPU enabled. Elements Satellite offers a unified interface no matter where people are located or where systems ultimately reside. This is an editing system for the present and, as intelligent cloud-based workflows become more commonplace, for the future.

Further information can be found here https://elements.tv/satellite where you can sign up for a no commitment two-week trial. No strings (fibre or wire) attached. 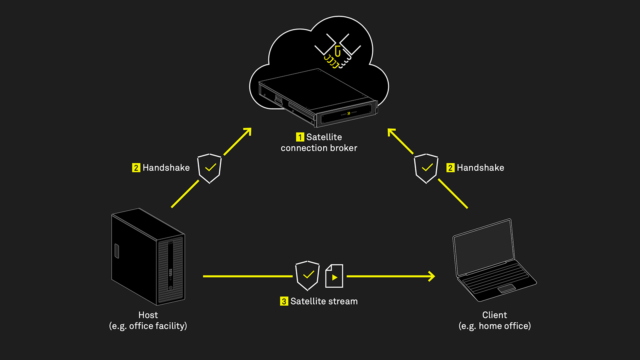 * Wrapped around the simple but effective Satellite experience is the ELEMENTS Client application. This lightweight software handles the user login including two factor authentication and single click connection. The ELEMENTS Client application sits on both the host and the remote workstations and enables the host desktop to be controlled with a single click. In the background a cloud-based broker handles the security handshaking and provides the browser-based Web interface for adding users and allowing access to their applicable workstations.

The Satellite broker is a cut down version of the ELEMENTS workflow and automation engine, meaning that it can be seamlessly integrated into existing ELEMENTS storage environments. This provides added benefits in being able to drive automation and workflow at the controlled workstations, moving content between sites and in the cloud – all without needing to download or touch the actual content from the remote location.