Features & Opinion16.10.18
Netflix's Apostle: the story of the grade

The post team behind Netflix horror-thriller Apostle on how it delivered an unnerving and gory DI, whilst ensuring the streaming giant’s high technical requirements were met.

It’s 1905, and a man, whose sister has been kidnapped by a sadistic, religious cult, travels to the remote island on which its commune is built, in a bid to rescue her. As he digs deeper, he begins to uncover more and more secrets that threaten everything the cult stands for, and it soon becomes apparent that they will regret the day they ever baited him.

Starring Dan Stevens (Beauty and the Beast), and written and directed by Gareth Evans (The Raid films), this upcoming Netflix Original has blood, horror and revenge at its core.

“It is pretty graphic,” confirms colourist at Cinematic, Matt Mullins. “Though I think that’s just Gareth and his body of work. He likes his gore.”

Complementing Apostle’s sinister themes, Matt produced a textured, grimy aesthetic in DaVinci Resolve Studio, initially taking inspiration from 1970s classics such as The Texas Chainsaw Massacre and Invasion of the Body Snatchers for that grainy and grungy feel.

“The production team did a lot of initial tests to ensure the final results would be appealing to modern audiences whilst still having an old school look,” Matt says. “Gareth and the DP, Matt Flannery, toyed with the idea of delivering in HDR but actually decided against it as they felt it wouldn’t support the retro feel.”

He remembers, “They were even concerned about the 4K sharpness of the files and whether they should use vintage or sharper, more modern lenses. It was a fascinating process! Luckily, Apostle’s production design was terrific. When the rushes came through to post, we were impressed with the colour choices in the art direction, especially with some of the very dark period settings lit by candlelight.”

To create the final grade, Matt worked together with Gareth to go through each scene meticulously, as though it was a standalone short, ensuring every element supported Apostle’s old-worldly, gruesome narrative.

“The grade was actually very complex,” he says. “We relied heavily on tools such as Film Grain FX, and focused on mid-tone details to replicate that look. However, there were times where we ended up with a slightly de-saturated palette. As soon as you get to a graphic sequence, and you’ve pulled out saturation, the blood doesn’t quite sit right. It’s either almost brown, or it just looks like Ribena.” 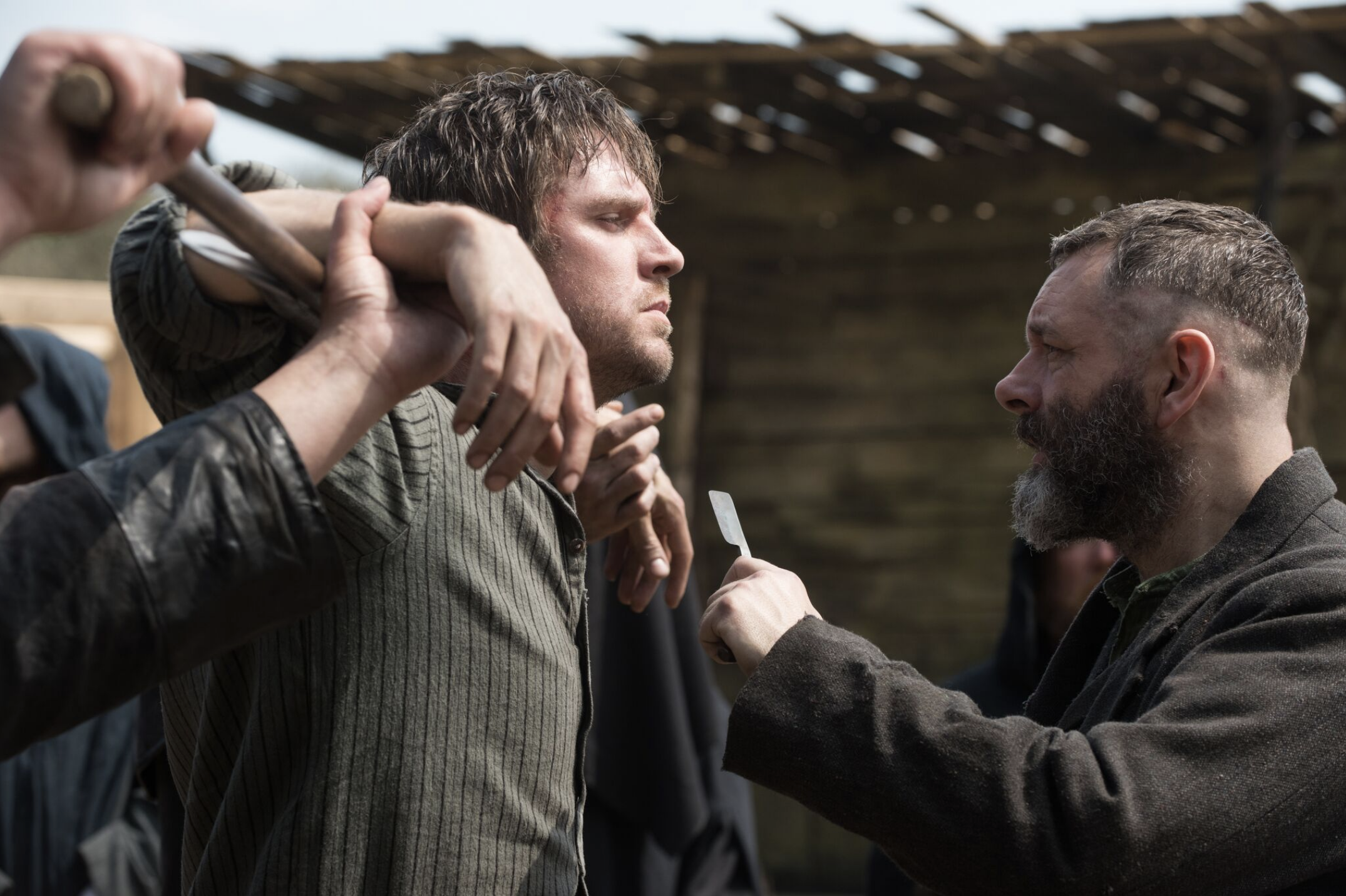 Making use of Resolve’s power windows and tracker, Matt drew around certain elements and enhanced their colour throughout the frame. “So, when blood does show up, rushing from an open wound or spattering on a wall, for example, we had shapes all around it as it’s flying through the air,” he reveals, “and the result was convincing; what’s supposed to be blood really looks like blood. It was just like painting a canvas but with a film frame instead. By the end we’d sometimes have 20 nodes for just one sequence!”

Grading wasn’t the only challenge for the Cinematic team. Being able to deliver its work suitably for Netflix, whilst handling the hundreds of visual effects shots needed for a horror like Apostle, ultimately meant the studio needed a complete upgrade.

“Working on Apostle changed a lot for us,” says Cinematic co-founder, Gareth Bryn. “Netflix has incredibly high technical specifications for post production on its Originals output. Apostle was shot on RED, and final delivery packaging from us was in the form of a 4K 16-bit DPX sequence. This would then be sent to a preferred vendor to create the final package that gets uploaded to Netflix. Had we gone HDR, we’d have done a similar thing but given them the metadata as well.

“The only problem was that every time we rendered anything that needed any kind of processing, we had to render it out as a 4K, 16-bit DPX – something that saw the data rates for real-time play jump to 1800 mb/s.”

There wasn’t much available to Gareth and Matt that would be able to handle those data rates, especially not on a shared storage basis, and so they knew straightaway that a complete studio upgrade was in order to properly cater for a show this size.

“We had over 300 VFX shots to contend with, which was probably our biggest challenge of all,” Matt jumps in. “So with each one of those needing to be rendered out at 4K 16-bit DPX, it became a very different beast.”

The pair decided to build their own in-house SSD solution, capable of playing back multiple streams of 16-bit DPXs in real-time. “We also upgraded our cinema projector, bought a Dolby monitor, and more GPUs,” Gareth recalls. “We now have access to a flexible, fully scalable pipeline, which can accommodate up to four full Resolve Studio grading suites.”

“It seems like a lot, but we were more than happy to do it. After all, we love what we do and working on Apostle was an incredibly satisfying project,” Matt tells. “Mostly, that’s because of Gareth Evans himself. Despite being one of the most high-end directors I’ve ever worked with, he’s also one of the nicest. He’s completely meticulous with the way he works, but also very friendly. He and the DP were constantly laughing and joking with each other.”

“The beauty of companies like Blackmagic, is that the technology has become democratized to the point where this upgrade was possible. You can get the kit; the tricky bit is the amount of time, knowledge and experience you bring to the table! From a technical point of view, I feel as though we’ve upped our game with both. We started out in our bedrooms, but you can throw anything at us now and we can accommodate it. I like to call it the Netflix advantage.”