Sony unveiled a series of interesting new cameras at IBC, including a dual-lens 3d model, but before it got to any of that, it opened its IBC press conference by blasting straight into a five-minute stereo 3d reel. Alongside the usual footie and Hollywood 3d animations, it included a bit of Hendrix in 3d, which at least added variety to what I suspect  won’t be the last  3d reel I see at the show over the next few days.
David Bush, marketing director, Sony Professional, was the first to take to the stage and revealed Sony’s slightly forced sounding new banner for its professional products and services – Creatology; a mix of technology and creativity.
Bush says, after IBC, Sony is heading out on a Creatology tour, structured similarly to its Power of Images events last year, with a series of roadshows, master classes, training events and so on taking place in key European locations.
Back to IBC, Bush says Sony’s focus at the show is on 3d, HD and 35mm. Before any talk of new products, Bush announced Sony is about to open a 3d centre of excellence in Basingstoke. This will provide training for producers, directors, camera operators and convergence operators, and will be open from next month.
Next came the product news, delivered by audio visual media director Olivier Bovis. There’s plenty of it. Firstly, there are upgrades to Sony’s 3d box, the MPE-200, used recently for the slightly underwhelming 3d World Cup.

The box’s new features, “take another leap forward,” says Bovis, with it now able to do live 2d to 3d conversions, 3d picture stitching (where images from three cameras are stitched together to form a wide angle 3d shot) and 3d graphics insertion.

The images produced by the box’s 3d stitching and its live 2d to 3d convertor were, it has to be said, pretty impressive.
Bovis then unveiled a prototype dual-lens 3d camcorder (main picture) that will be available “some time next year”. It’s based on a new lens system with a half inch sensor. The shoulder-mount camera will “fill out our 3d line-up” and be well suited to sections of a 3d sports broadcast such as the manager interviews at the end of a game, for example. 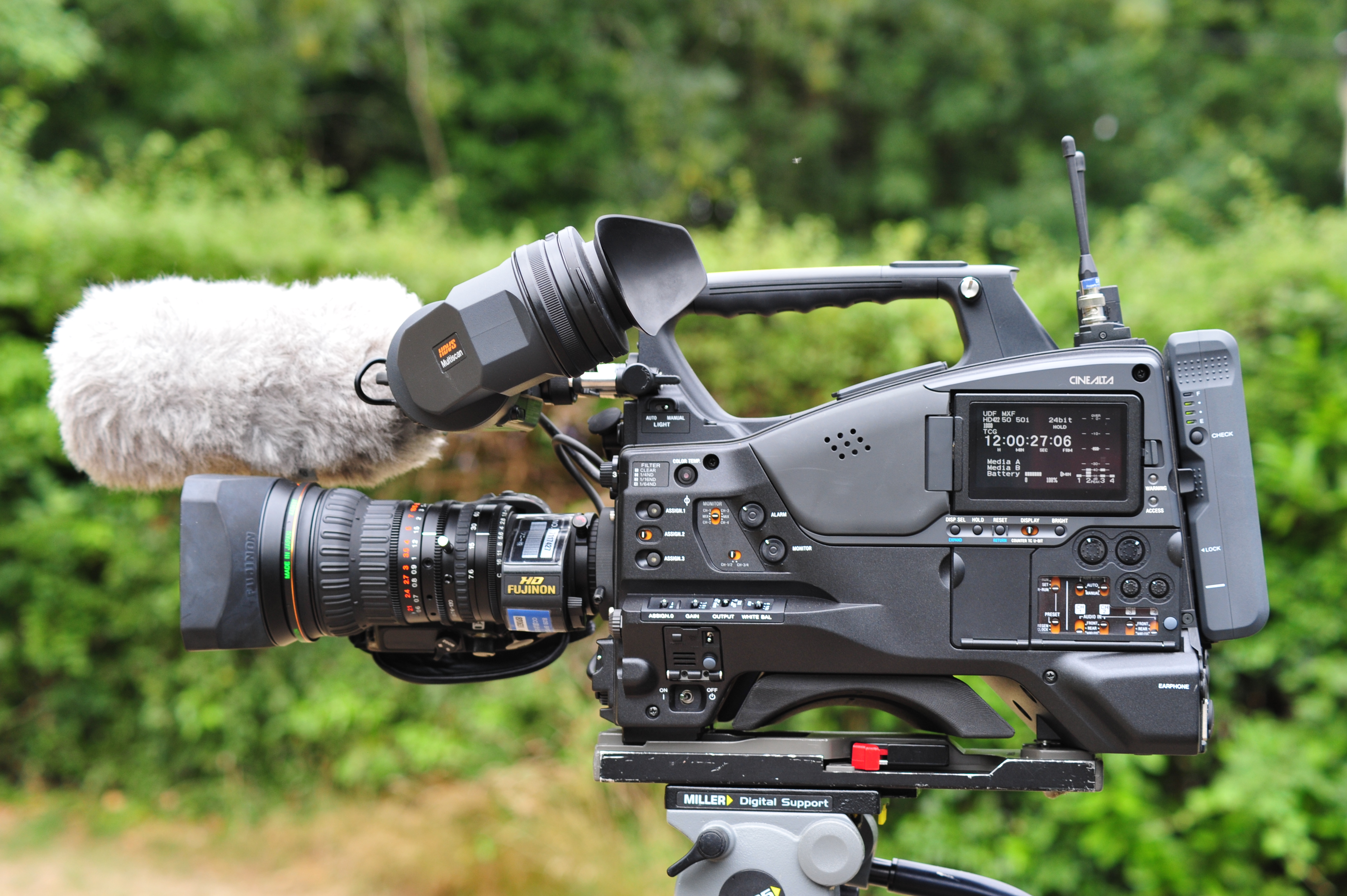 New HD cameras from Sony include the PMW-500 (above), a new XDCAM EX model that’s capable of 50 mb/s acquisition, making it the first of Sony’s cameras recording to solid-state memory to fulfill broadcasters’ minimum HD requirements.

It’s essentially the same camera as the PDW-700, the XDCAM HD422 model that records to Professional Disc. The 500 will be around 10% cheaper than the 700, and its introduction means Sony is able to “offer a disc-based solution as well as memory-card based product,” so you can choose which one best suits your workflow, explains Bovis. 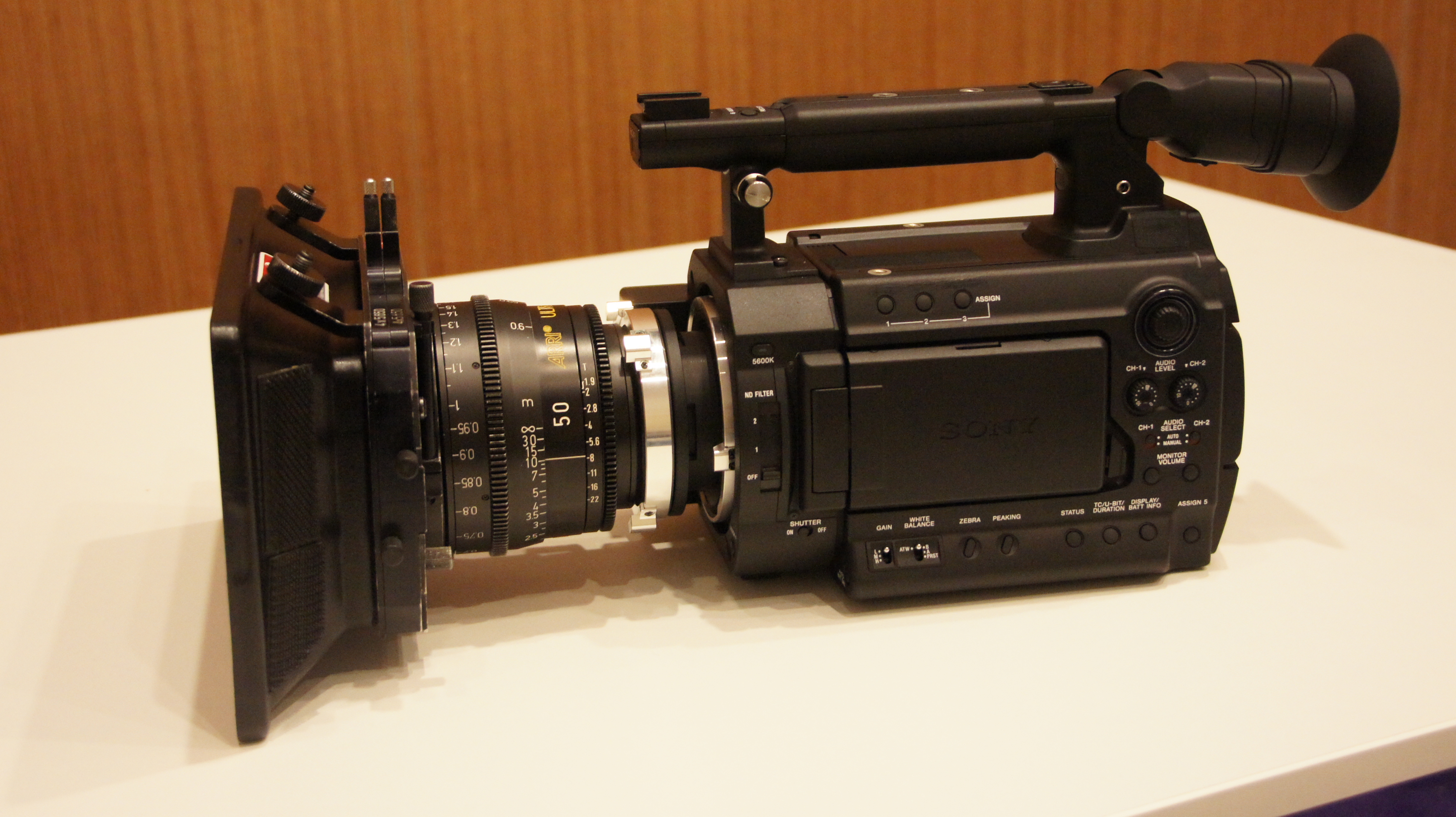 At the top-end, Sony revealed another prototype – this time for quite a dinky looking and currently unnamed digital 35mm camera (above) that’s going to be much more affordable than Sony’s F35 and SRW-9000PL models.