Aymeric Perceval, Cinesite’s vfx supervisor on Amazon Prime’s 10 part adaptation of Neil Gaiman’s American Gods, explains how the story of a battle between old and new gods was brought to the small screen

When did you get involved with the project?
Kevin Tod Haug, the client VFX Supervisor, contacted Cinesite Montreal initially in April 2016 to talk about ‘out of this world’ environments and ‘epic’ set extensions for an afterlife sequence which was going to be imminently filmed in Toronto and in Oklahoma. Very quickly, we also got involved in the look development of the storm, which is a character in itself, alongside other sequences. In total, we worked on 18 different sequences split over 5 episodes (1, 2, 3, 4 and 8). Although Cinesite’s work covered a good range of visual effects, they were predominantly driven by environment work.

What was the brief for the look, what were the references?
American Gods was a very interesting creative challenge for the crew. Fuller pitched it as “a cinematically aggressive show with tonal wonkiness”. The challenge was finding the balance between developing realistic effects to support the narrative whilst inviting the audience to believe in other visual possibilities and to be taken on a fantastical journey.

From the set extensions and constellations of the land of the dead to the evolution of the storms, the series allowed us immense freedom to invent, create and interpret concepts for which there was not always specific references we could draw from. Hopefully the end result is both rooted in realism and rife with otherworldly activity!

What were the most complex shots?
I have to be careful here to avoid spoilers! Complexity wise, some of the biggest shots we achieved for American Gods are no different from the ones we’d create for a blockbuster movie. However, a TV schedule and budget constraints forces you to work faster and around a smaller team of generalists. You do not have time to develop a full pipeline; this is where Cinesite’s experience and solutions developed for previous shows came in very handy.
One of the most demanding sequences we delivered was the audience’s introduction to Anubis and the afterlife. 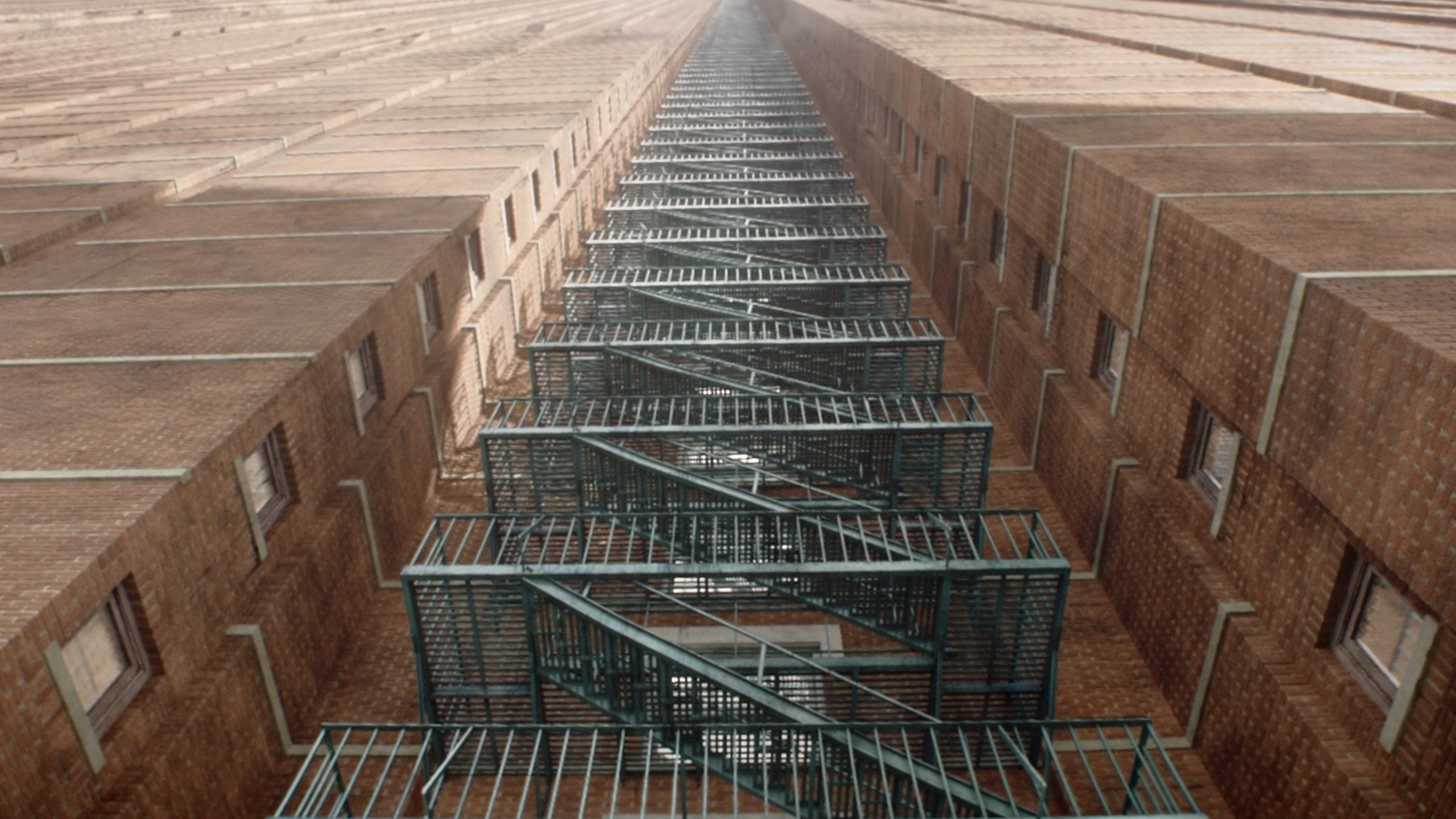 How was this achieved?
The sequence starts with a typical Kevin ‘impossible camera move’ going through multiple apartment plates, each representing a faith, and joined together by CG transitions. This obviously represented quite a challenge as all the cameras needed to be stabilised, retimed and reanimated to give a straight but not continuous movement. CG elements were introduced to help the transitions.

After a few shots of blue screen cat comps, we jump into substantial set extensions where the cast exit a two-storey apartment (built on stage) and climb an infinite wall going back in time. Each shot had to be a continuation of the previous one with the exception of a different geometry containing several ages, construction styles and materials.

Celestin Salomon, our lead modelling and texture artist said: “It was a very interesting job to first match the original building floor, then to build the transition to different construction styles: bricks, old damaged bricks, medieval rock wall, big rock blocks and finally a sculpted cliff. We created finely detailed displacement maps which gave the multiple walls a richer and more realistic look.” This result was then topped up with a layer of matte painting to push the photo-realism further. In lighting and comp, we focused on giving grandeur and openness, avoiding a claustrophobic feeling, even though we were often looking flat at a wall, never getting the perspective points in frame and keeping the on-set lighting.

Finally after completing the climb, the actors enter Anubis’s kingdom: a fantastical desert, halfway in between Earth and another dimension. This part of the sequence was filmed on location in Oklahoma.

The reality of shooting across multiple days and different times of day meant that we initially had to heavily manipulate the scans so they matched each other. This adjustment had to be detailed because a neutral grade was not enough and yet we didn’t want to affect the original material too much.

Then we replaced the sand dunes because they were not as pristine as the showrunners wanted them to be (i.e. too many human footsteps / car tire marks). We completed the dune environment with blowing FX sand passes in order to give the shots a bit more life. For the sky, our lead compositor Remi Martin played with multiple layers of constellations and stars, using space and long exposure night photography as reference. We then added fx passes and other 2d elements to avoid it looking too familiar. Because there was no sun in this universe, we used the constellations as light sources matching the lighting on the actors. In the end, we had to design every angle differently in comp which allowed our compers to experiment and have fun with Remi’s set up, it also helped us fine tune each one of them up to the last minute.