Being an explorer in the 21st Century is a very different business to what it was during great age of exploration in the 1800s.

Levinson Wood’s bid to become the first man to walk the entire length of the Nile is a case in point. Wood, an expedition leader, writer and photographer, set off from the source of the Nile in Rwanda last month. His epic 4,250 mile journey through to Egypt is expected to take a year.

Along the way, though, he is tweeting (@walkingthenile), facebooking, and blogging (channel4.com/walkingthenile), providing a continual stream of updates, pictures and videos about his journey.

Wood will also be visited at key points by a crew from October Films, who are making a four-part television series, Walking the Nile, for Channel 4 to be aired in Autumn 2014.

As well as providing a unique record of the expedition, the multiplatform activity is designed both to inform and to raise awareness of the trip and TV series.

Mark Atkin, multiplatform commissioning editor at Channel 4, says Wood’s trip will provide “a first person view of contemporary Africa as he walks through the continent.”

On one level, Wood’s multiplatform activity will take in the wildlife, landscapes, people and challenges he meets along the way. But Atkin suggests that it could also influence his trip too – with followers providing encouragement when the going gets hard or advice in difficult situations. Some might even get physically interactive too, perhaps turning up en route to provide support. “It’s impossible to predict everything that might happen,” says Atkin. 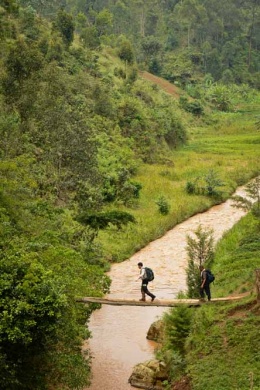 Communicating with the outside world isn’t too much of a problem, says Atkin, who points out that “most of Africa is superbly connected.” The iPhone 5s, connected with a Thurya Sat sleeve to transform it into a satellite smartphone, is perhaps the key piece of kit. Wood also has a Sony NX30E, GoPro Hero3+ and Leica camera to film and photograph the journey. And he’s lugging around an iPad Air, power generators in the form of a Mini Power Gorilla and a portable solar panel (a Goal Zero Nomad 12). Plus, of course, a pedometer – a Fitibit Flex wristband.

Atkin is careful to put the multiplatform activity into perspective though. “His [Wood’s] primary goal is to be the first person in history to walk the Nile. His secondary goal is to make TV out of it.”

Walking the Nile is executive produced by Adam Bullmore for October Films and Melanie Darlaston and Tony Moulsdale for GroupM Entertainment. C4 commissioners are Atkin and John Hay.