Pistol is an adaptation written by Craig Peace of guitarist Steve Jones’ autobiography, Lonely Boy: Tales from a Sex Pistol, and tells the story of the group’s formation in 1975 and the chaotic years leading up to the death of Sid Vicious by heroin overdose in 1979. The show stars Toby Wallace as Steve Jones, Anson Boon as Johnny Rotten, Louis Partridge as Sid Vicious, Jacob Slater as Paul Cook, and Maisie Williams as Jordan.

Union co-founder and lead VFX supervisor Adam Gascoyne has worked with Danny Boyle on a number of projects before including Slumdog Millionaire, T2 Trainspotting, and the London 2012 Olympic Opening Ceremony. 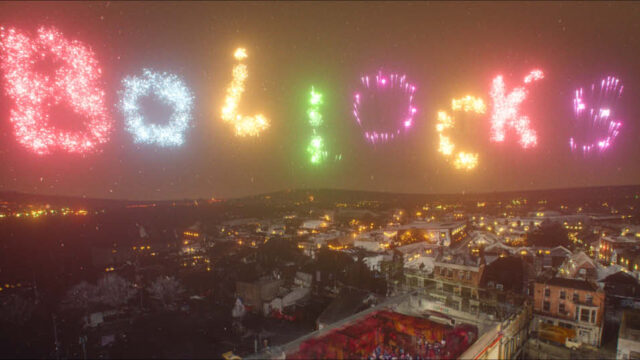 Here’s what Union did.

As is always the case for historical work, invisible VFX were central to making the show believable. Union’s main brief for the project was to make everything look like London in the late 70’s, a goal that becomes increasingly challenging as gentrification creeps across the city. “It’s really hard to find parts of London that work for the period and don’t require a large amount of VFX work,” says Adam. “We worked very closely with the Art department, Locations, and Danny himself to find areas we could use. We found pockets of old London and used these to shoot in and then erased the modern world as much as we could.” The Union team worked on extensive environment clean-ups, removing contemporary markings and objects, while adding dirt, dishevelment and other signifiers of the 70’s era. 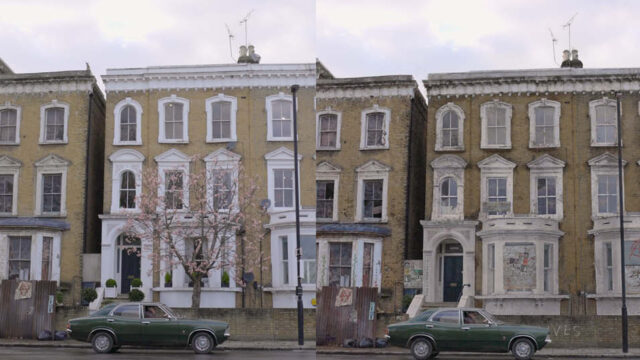 Preparatory work for Pistol began in August 2020 and the team worked until May 2022, with filming taking place through the Covid lockdowns. “That added all sorts of challenges around recreating the gigs with big sweaty crowds in enclosed venues – we were able to step in and enlarge crowds at some of the gigs,” says Adam. “We also had the challenge of recreating the showers of spit experienced in the punk gigs of the late 70’s. Obviously in a Covid-riddled world there was no real spitting allowed so SFX and CGI gob rigs were developed.”

Filming took place all over London as well as some locations in Whitby and other parts of Yorkshire, and Dover and Deal in Kent. A VFX team consisting of Adam and Onset Supervisor Jake Green was present almost every day of the shoot.

While in London the team were able to film in the legendary 100 Club, where The Sex Pistols played several times. “It really added to the authenticity of the project. I don’t think it’s been decorated since they played there!” says Adam. They also did a two-week shoot in Texas with a small crew packed inside an old 70’s tour bus, during which time they drove more miles than it would take to get from London to Dallas. 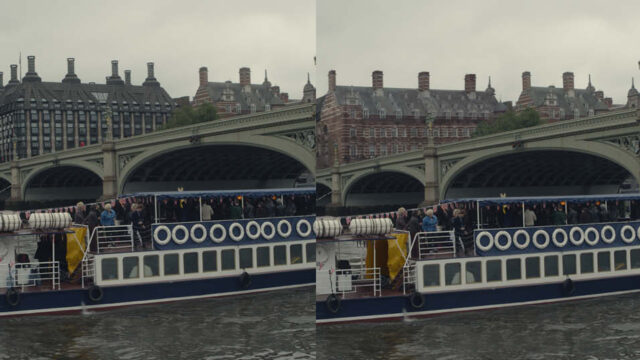 The seamless blending of original archive with shot footage was important on this show, and Union developed a few film looks and transitions throughout the piece to help with this. A neat trick was used to assist with pacing: they added trains into many of the shots so that there was always something moving to help keep things on track.

The punk clothing boutique “Sex” owned by Vivienne Westwood and Malcolm McLaren was a key location that had to be recreated digitally. Union produced a CG matte painting of the Kings Road around the shop, and the interiors were shot on a soundstage with a grey screen outside the windows. All of the scenes that took place inside band members’ flats were also shot on a soundstage with the window views added afterwards in post. “Everything from dirtying down buildings to removing road markings and graffiti, we did it all,” says Adam.

Working closely with Canon and Flashpack, Union helped to develop and build a Bullet Time camera rig that was used to emphasise significant moments in the story. They built two rigs; one with a 12-camera array and another smaller, handheld version of the setup with 6 cameras. “Canon very kindly supplied us with 18 Canon R5’s which are amazing cameras,” says Adam. “This rig was used to capture frozen moments throughout the show and really added to the visual language of the piece.”

The series finale depicting the Pistols’ infamous last UK gig at Ivanhoe’s in Huddersfield was created in collaboration with ScanLAB, a creative practice that specialises in the use of ultra high density pointclouds to create digital replicas of buildings, objects and events. 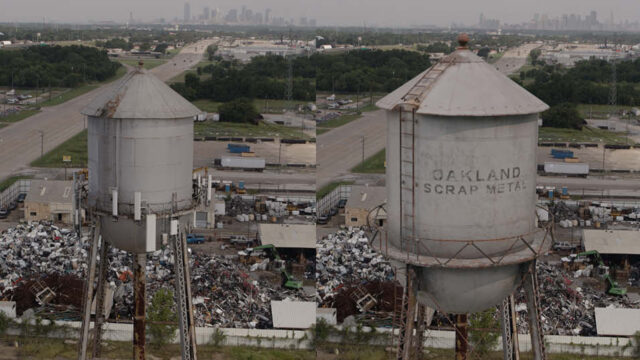 To create this shot, LiDAR scans of multiple external and internal filming locations had to be combined into one seamless scene. This meant integrating the exterior of Ivanhoe’s, scanned during filming in Deal, with the interior, a night club in New Cross. The band and 100 other members of the cast were then volumetrically captured on blue screen using ScanLAB’s custom pointcloud capture rig and positioned virtually back within the scene.

Union provided ScanLAB with a camera move created as part of their previs process to help them plan their data gathering on set. “Using their data we could create a CG camera to render the LiDAR from so that it could be blended with the plate,” says Adam. “Following collective discussion and test, we agreed on a method by which they could render in the required layers, providing data channels for us to combine with the live action plate.”

In total, over 20TB of data was captured during filming. The final scene was rendered out using ScanLAB’s point cloud engine and handed over to Union for grade and the final VFX layers, which included adding fireworks and snow to create the final shot.

Working with the immense talent of director Danny Boyle and cinematographer Anthony Dod Mantle was as thrilling as ever for the team at Union, and the pair never fails to bring fresh challenges. “The kind of camera motion, the filters, and the sheer number of cameras they use all pose interesting hurdles!” says Adam. “But that is why their films look and feel so edgy and thoroughly original. We embraced the chaos, and although at times it made the shots more difficult, the end result is a truly original look and feel to the show. There was one gig where we had over 35 cameras rolling at one point! Good luck to the data wranglers with that one!”

Louisa Sutherland-Smith, currently head of Production at Halo Post Production is stepping up to become managing director for the company from 1st April next year. The role will oversee the whole of Halo’s UK operation and will >>>