Features & Opinion25.07.12
Behind the scenes on Sienna Miller Hitchcock drama The Girl

It’s a tough call for a director, shooting a film about one of the most lauded and influential filmmakers of all time.

But that’s what Julian Jarrold was faced with as he approached The Girl, a new one-off BBC drama that tells the true story of Alfred Hitchcock’s obsessive desire for the star of both The Birds and Marnie, Tippi Hedren.

It’s a tough call because there’s an ever-present danger of ending up with a crass imitation rather than a period take on Hitchcock’s world. "A lot of films have tried to be Hitchcockian in style and plotting and haven’t really worked," says Jarrold. "I was aware of that and the huge danger of copying from the master. It’s not in any way trying to imitate."

But it was also important to take the viewer into Hitchcock’s world. "I didn’t try a completely Hitchcockian style but we did give it a look that’s more in common with that world and shooting style as an overall feel."
But at times, a straight copy of Hitchcock was required. The film takes in Sienna Miller (as Tippi) shooting scenes from The Birds, and then those scenes being played out in Hitchcock’s screening room later.  For those "we are trying to recreate very accurately the scene whether through filters, lighting, camera work and the rest of it. We shot those on 35mm film, with lots of filters and we graded it to give it that Technicolor look." 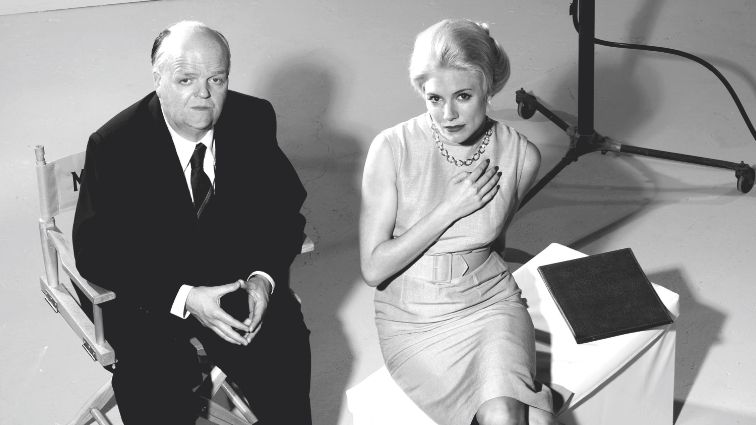 So by contrast, the rest of the film had to take a step back from the Hitchcock style. "The rest of the film we shot on the Arri Alexa and although we did use certain filtration to give it that 60s period feel, we wanted a subtle difference. Hitchcock’s style is highly artificial. It’s a unique style that nobody does now and that’s partly due to the film stocks of the time but also Hitchcock’s famous control. He constructed everything very carefully."

This film, of course, is not a fiction, it’s based on documented fact. But its subject is still Hollywood, which demands a little more than a straight documentary take. "It’s an interesting one," says Jarrold. "It’s real and based on research but it’s also about the dream factory and people filming scenes about characters playing different characters. It’s also about how he’s manipulating her. So you are playing on different levels."

The result was "quite a rich, contrasty look which felt sympathetic to the period." The Birds and Marnie, the Hitchcock films that Hedren starred in, were obvious stylistic starting points. But also Vertigo "had a parallel with the strange, highly romantic obsession that James Stewart has. We were trying to create the world of Hollywood and the studio system and to some extent the glamour of it but also the darkness as well."

The film was shot in South Africa "which proved a brilliant solution because of the climate and the blue skies. And we found locations that match almost exactly Bodega Bay" where The Birds was shot.

A piece of luck was also had for the studio shots. The crew found the 3Arts Centre, an old studio that’s now used infrequently "and hasn’t been updated for many years. So it was virtually perfect with its corridors and cable system and curtains. Nothing had been touched for years. It was a huge space so we managed to shoot a lot of stuff there" including using other rooms for Hitchcock’s office and Tippi’s dressing room.

The shoot itself lasted four weeks, squeezed over Christmas due to the filming commitments of the two headliners. Shooting time was also squeezed by applying Toby Jones’ extensive prosthetics each day and costume changes for Sienna Miller.

The other challenge was for Toby Jones not to end up doing an impression of Hitchcock. And his performance, says Jarrold "is very much not that. Toby just captures a certain spirit of the man which is everything from the humour to the cruelty of him." But, says Jarrold, the accuracy of the portrayal was often confusing on set. "When Toby was on set he did feel like the director. When he said cut the clapper loader from my crew would walk into shot thinking the shot had ended." The best tribute an actor could have.