Features & Opinion03.06.15
Behind the scenes - Kate Humble: Living with Nomads

What kit do you pack when you’re making a film about nomads who live in some of the world’s most remote and inhospitable places? Alexis Girardet, series producer/director on Indus Films’ Kate Humble: Living with Nomads for BBC Two, reveals all

“Filming Indus Films’ Kate Humble: Living with Nomads for BBC Two took us to some wild and remote parts of the world. Some I had been before, and others were new to me.  But all were unique and presented an entirely different set of challenges.

The key for us was to get as remote as possible, often taking 3 or 4 days to get to locations, using planes, vehicles and doing a whole lot of walking.

Nomads, by the very nature of their existence, live in inaccessible and often inhospitable places. They are often the last refuges for their free and simple lifestyles – where they can live as they want without interference, or, increasingly, where they are forced to exist as they become more and more marginalized.

In Mongolia we were welcomed with open arms from the start; on my first night I ended up sleeping next to the 89-year-old great grandmother in the family ger (a Mongolian yurt).

But, in Siberia we ended up barricading ourselves into a room as drunken Russian oil workers tried to kick our door in.

In Nepal, after an initially successful recce, we got the cold shoulder and demands for cash when we started filming, which made the first few days really tricky.

But in all instances we stayed the course and slowly chipped away at the difficulties in our way; eventually we ended up having tears and hugs with all the nomads when the time came to leave. It was a very rich and rewarding experience. 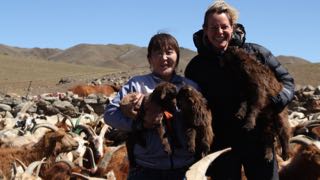 Conditions in these remote and wild places vary; there are warm, sunny, easy days and then there are brutal, arctic, torturous days. During spring in Mongolia, with its seemingly barren expanses, a full-on blizzard in the morning can transform into a gloriously sunny afternoon. Nepal was hot, humid and full of the steepest bloody hills imaginable; Siberia was flat, barren and frozen down to -55C, yet beautiful too.

I’ve done a lot of work in extreme cold, so I felt comfortable filming in the depths of the Siberian winter, but the conditions were daunting for some of the team.

We spent the most time prepping for this shoot, and, as with every location, had to prepare for all eventualities. That’s the tricky part; the sheer remoteness and basic facilities of a lot of the locations makes taking too much kit nigh on impossible.

But, that very remoteness requires spares and backups, as there are no facilities houses on hand to replace broken kit. It’s the eternal dilemma, what to take and what to leave behind, and endless lists seem to help focus our minds, along with a dose of good luck!

For Mongolia, the first shoot, we took a Sony F800 with 2 lenses to help capture the wide-open expanses of the Gobi Desert. This was fabulous for capturing life in the wilderness, but for long hikes through the steppe I reverted to a Canon 305, a stalwart that I’ve come to rely on in many remote places.

For me, the ability to use CF cards like old fashioned tapes is the biggest bonus. There is just no point in taking all the media management kit  for copying rushes every day; with limited power, high altitude and long days, it’s easiest and simplest to leave all that to post back in the UK. And  a light camera helps when trying to keep up with a herd of goats on the move. They really don’t take direction well at all! 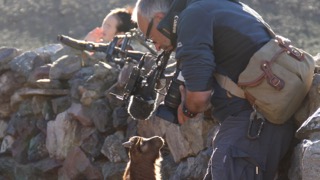 In Nepal, I knew from the recce we would be moving a lot and that we would be even further away from any vehicle support, so keeping lightweight was essential. I ditched the F800 and relied on the 305 entirely. With so many hills, it turned out to be a godsend.

For Siberia, I knew that the 305 would once again be the camera of choice, having used one in both the north and south poles on extended expeditions. But this time I took two: one as my outside camera and one for inside. I asked soundman Mark to do the same with his sound kit, so in effect we had two completely separate units to help cope with the move from -55C to the warmth of a Nenet tent. It takes a long time to melt a frozen lens and the build-up of water and ice inside the kit doesn’t really mix all that well with delicate electronics…

For all the shoots we took the inevitable selection of Go-pros and my trusty ‘Jungle Cam’, the Sony NX70, for Video Diaries, infra-red night shoots and as a backup. It’s travelled the world; it’s been washed down white water in the Zambezi, frozen to death at the North and South Poles, and it’s even attempted Everest with me, facing blizzards and avalanches. It’s still hanging in there – just!

We decided to keep the crew really small: Kate, soundman extraordinaire Mark Roberts, AP Kate Owen and myself (self-shooting SP/D). The whole point of the series was to get Kate (and ourselves) fully immersed in nomadic life and I always feel that a small, tight-knit unit will work best in these kinds of situations. In addition, as we were to camp and/or live with our hosts, a light footprint was essential – especially when it came to moving with them.

We employed local fixers and translators to help manage our logistics and communications with the nomads, but again we didn’t want to make this a big circus act following behind, so kept this small. Our crew size and equipment choices were integral to the success of the production; Kate immersed herself and became part of their lives for a few weeks. Despite the ups and downs, we got unique access to some incredible people, living amazing lives in wild places.”