Features & Opinion14.05.14
Behind the scenes: From There to Here

Peter Bowker’s From There To Here spans four tumultuous years that changed Manchester and Britain forever. The drama starts with the IRA Manchester bomb and the Euro 96 tournament and runs through the hope engendered by New Labour’s 1997 landslide election to the hangover of the Millennium celebrations. It focuses on two families from different sides of the tracks who are brought together in the aftermath of the bomb. 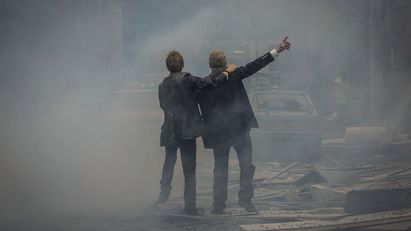 Why did you want to direct the show? I was actually in Manchester on the day of the bomb. Back in 96 I was training as a director at Granada. It was a sunny morning and I was walking into town towards the Arndale Centre and almost got blown off my feet. Also I’d wanted to work for Peter for a while as he’s a brilliant writer.

What’s the story about? It’s the story of a family and of the city. In the years we cover, the city went under more change than at any point since the industrial revolution. But it’s also seen through the eyes of a family. We start at the fag end of John Major’s government that gave rise to the excitement surrounding New Labour and then we see how that turns as hopes started to go sour.

Is it harder doing period drama when it’s very recent? It’s hardest on the design team. They don’t get the budget for a Victorian period drama but its period detail is still massive. You’ve got to pay as much attention as if it was set in the 20s or 200 years ago.

What did you have to watch out for? Cars are the main thing. And the Manchester skyline too. A lot of our cgi budget was spent removing buildings. Part of the story is the huge amount of building that went on post millennium with the rebuilding of the Arndale Centre. The majority of that happened after our story. 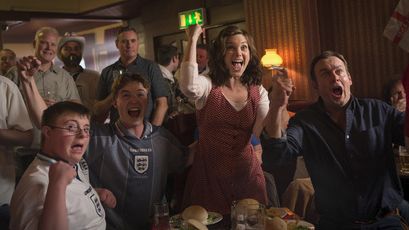 Was it difficult to shoot the ‘old’ Manchester then? You’ve got to be careful how you frame things. You’ve got to be really selective and do your homework. There are still fantastic bits that haven’t changed in 50 years but you’re removing rather than building. The Northern Quarter is redeveloped now. It’s about finding those back streets and bits that haven’t been redeveloped and just dressing them to take them back. The Boo Club [owned by Steven Mackintosh’s character] is in an old alleyway. That block was about to be redeveloped so we got in there quickly. A lot of the clubs back then were just warehouse spaces the promoters had walked into and stuck a sign on the door so we adopted that model.

Where did you create the main set piece IRA bomb explosion? The main set piece of the explosion and its aftermath was shot in the centre of Manchester. We adapted certain streets to make them similar to the actual place where the bomb went off.

What reference material of the bomb did you use?There is a lot of reference material of Handycam footage that was shot on the day. The police themselves went out with cameras that day to collect evidence so there’s a lot of poor quality but useful reference material from the police archives and there’s news camera footage too. The photos remind you of 9/11 which obviously happened afterwards. It’s that caking of dust when a building implodes which you associate with 9/11 but you look at the Arndale bomb and it’s very similar. There’s lots of paper in the air, twisted metal and plumes of dust in the air.

How did you shoot the actual explosion? Our characters experience it inside a pub. All the explosions we did for real and then we enhanced them with bits of glass and stuff. We wanted to make it as real as possible so we put the actors right in there. They were told it’s safe but because it’s a one shot only thing due to the cost of it, those moments focus the minds. Even though it’s been prepped, the size of the explosion was pretty big so everyone’s concentrating hard. It was a complicated process putting that sequence together. We only had one chance so we had four cameras on it. Then when they’re walking through the aftermath that is a big set and we extended it with cgi to match the angles of where it was in Manchester and its relationship to the Arndale.

How did you want Manchester to look? I lived in Manchester for a couple of years and it rained most of the time but that summer it was hot and summery. Manchester can be portrayed as a bit grim and a bit bleak but it’s full of colour and life and vibrancy so we went for that. It’s a city in the summer and we were being true to those days when everyone was watching Euro 96 in their t-shirts and England shirts. We didn’t want to be too depressing and bleak about it.

Did you try to capture the period in the shooting style? We did that more in the music and the look rather than the camera style, which was fairly classic. We didn’t go too close up, we kept it wide and looser so you can see the landscape and see the people. It’s about a city so you want to see the city. We worked hard to find locations that let the city come through. 