Next Thursday’s Soho Be You Festival – one day of sessions talking about inclusion and diversity in film and TV –  has confirmed new sessions and speakers. Co-founders of youth-driven production company Fully Focused – Teddy Nygh and Nick Bedu – will lead a session. There will be a spotlight on disability, with a behind-the-scenes session on upcoming ITV Studios/ Keshet/ Tiger Aspect drama Ralph and Katie for the BBC, which features disabled talent, both in front of and behind the camera.

A focus on next generation talent and skills will see motion capture actor, Ace Ruele, give an inspirational talk, Exercising your potential to create your own path. This will be followed by a panel of some of the industry’s most creative technologists who will explore how technology can level the playing field.

Issues around mental health and bullying in the industry feature heavily in the programme, with a practical workshop being led by Matt Longley and Leo Anna Thomas who explain the practical steps production companies can take to care for the mental health of their freelance film crews. Brian Hills’ recent film TOXIC, which highlights bullying in the film and TV community, will be screened in Gravity House throughout the day. And panel sessions, led by broadcaster Sean Fletcher and Reverend Peterson Feital, will create open up frank discussions on cancel culture and mental health.

The day of sessions, talks, meet-ups and workshops will take place in venues around Soho, including the Dolby Theatre in Soho Square, Gravity House, Picture Shop and the rooftop space at Zero-One.

The Be You party, being held at Zero-One in Hopkins Street, will include music from ex Earth Wind and Fire performer Joseph ‘Mo’ Pleasure and singer Kedma Macias. Tickets are separately bookable and include drinks.

The Festival is for anyone in film and TV, or aspiring to work in the industry, who wants to move forward and help create a better culture.

Televisual members have a 30% discount on the ticket for the whole day, using the code TV30 and student/trainee discounts are available too. To see the full programme and to book a ticket, the website is: www.sohomediaclub.com/beyou 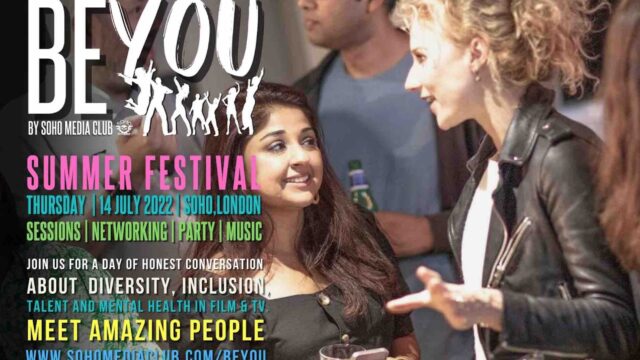 Banijay Rights has extended its first-look development deal with factual indie Proper Content for a further two years. Under the new agreement, both parties will further develop and produce series for the UK and international markets, building >>>