The drama surrounds the mysterious disappearance of a Scottish fishing trawler and a death on-board a Trident nuclear submarine ‘HMS Vigil’ which brings the police into conflict with the Navy and British security services. DCI Amy Silva (Suranne Jones, Gentleman Jack) leads an investigation on land and at sea into a conspiracy that goes to the very heart of Britain’s national security.

Vigil is written and created by BAFTA-nominated writer Tom Edge (Judy, The Crown), with episodes by Ed Macdonald and Chandni Lakhani. It is directed by BAFTA winner James Strong, and BAFTA nominee Isabelle Sieb.  Vigil is produced by Angie Daniell, executive produced by Simon Heath and Jake Lushington for World Productions (Line of Duty, The Pembrokeshire Murders), Gaynor Holmes for the BBC, James Strong and Tom Edge.

From the producers of Line of Duty, The Pembrokeshire Murders and Bodyguard,  this gripping six-part conspiracy thriller presented a group of post-production houses with some of their biggest challenges to-date.

With principal photography and post-production running throughout the pandemic, the teams had to navigate shoot delays, stay-at-home orders, and remote reviews and approvals, all while bringing to life the sights and sounds of the claustrophobic, high-pressure HMS Vigil, a submarine set built in a studio in Dumbarton, Scotland..

James Strong, Vigil, Director and Exec. Producer – “Vigil was a very bold and ambitious project from conception, with huge creative challenges and that’s just in the first ten minutes of the show! The challenge was to create a Royal Navy Trident submarine, the setting for the series, and then the journey of our hero Amy Silva (played by Suranne Jones) in a helicopter and being winched down onto the sub – all in the middle of the North Sea.

For the whole show we challenged ourselves to do as much as possible in camera – then add to this in post, so bringing on all three post-production companies as partners early in the process was vital. For Amy’s journey to the sub we shot ship-to-ship plates of the helicopter and then added the extra elements of Amy on the winch and the conning tower which were all seamlessly blended together.

The real Trident submarines are shrouded in secrecy so the design of the VFX submarine had to be constructed from a mix of the memories of former submariners and scouring the internet for any similar designs. The final submarine is an incredible piece of guesswork and design.

We chose Goodbye Kansas for their great experience with creating water environments. GK provided on-set Supervision and worked with us on the methodology and shot composition for our complex CGI set pieces throughout the shoot.

Alongside them were our picture house Blazing Griffin Post. Working with colourist Colin Brown early on was fundamental, to set the colour palette and tones for the submarine interior. This was a great advantage and helped us set our ‘look’ from the outset.  We did camera and grade tests before filming as it was really important to see how the set and in particular the lights would ultimately look on-screen.  Unusually, all the lights were integrated within the set so having Colin set the tone and luminescence levels early on was hugely important.

The final piece of the jigsaw was Savalas who created an unforgettable and highly detailed soundscape for the submarine interiors.

All three post companies rose to the challenge, working brilliantly in physical isolation throughout the entire production – three venders at the top of their game, utilising the incredible talent in Scotland.” 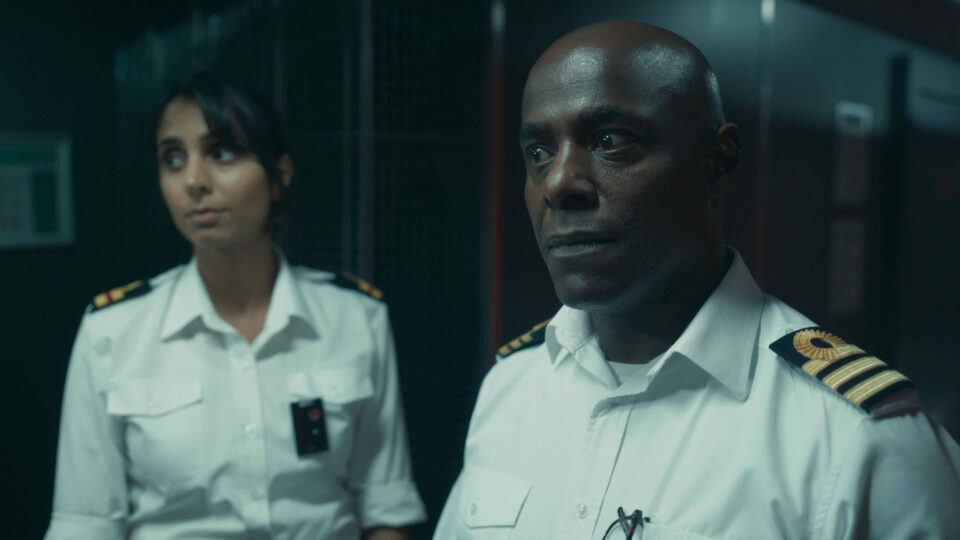 Johanne Wood, Post Supervisor, Blazing Griffin Post comments “Vigil was by far one of the most challenging and longest post-production projects we’ve managed for a TV series.  We were thrilled to be working on the first major HDR project to come out of Scotland.  It was always going to be a hugely ambitious project and when the pandemic hit 7 weeks into our shoot and offline the post production teams adapted brilliantly.  Our Editorial team spanned the length of the country, and Editors Steven Worsley, Nikki McChristie and Chris Buckland embraced remote working, carrying on Fine Cut by working with Directors via Evercast, confidently supported by Assistant Editors Rachel Erskine and Savanna Gladstone.  The vast majority of Final Post and VFX was completed throughout Lockdown 2, with Blazing Griffin Post, Savalas and Goodbye Kansas adapting workflows and schedules to keep the project on track and deliver on time to the BBC and to ITV Studios, who distribute the series internationally.”

In late 2019, colourist Colin Brown worked with DOP Matt Gray to discuss the look and create the Show LUT but, due to the pandemic, work was put on hold several times, with the first episode only reaching the grade suite a year later in November 2020.  Episodes 1 to 3 were completed on site at Blazing Griffin’s 4K HDR hero grade suite in Glasgow together with the DOP, Matt Gray, and review files sent to the director James Strong.  Episodes 4 to 6 were completed remotely using Sohonet ClearView to send output from the suite in Glasgow to the directors Isabelle Sieb and DP Ruairi O’Brian in London, using iPads Pros calibrated to match the suite’s 4K Sony X300 monitor.

The huge number of VFX effects was challenging and meant going back to grade after the effects were added, talking grading work from the beginning right through to the end.

Colin Brown, Colourist, Blazing Griffin Post explaines “We decided to grade the SDR first to suit the wider audience. We graded in ACES and tone mapped to rec709.  I think at the time, this was the best decision, especially with how the pandemic progressed, otherwise it would have made sign-off complicated on HDR.  On other projects, we’re grading the HDR first to meet our clients demand for the impressive range of colour HDR offers and the level of grade we can create.  In my opinion, the HDR version is the best version of the series.”

Jon Bruce, Finishing Editor, Blazing Griffin Post, started online-edit work in September 2020 and finished in February 2021, with the various deliverables and reversioning happening through until May 2021.

Each episode required a great deal of online picture enhancement and digital fix work, with Episode 1 requiring approximately 120 shots to work on, not including the VFX from Goodbye Kansas.

Land removal, sky replacement, green screen compositing and phone and television screen replacements were where the bulk of the work was crafted in Blazing Griffin’s online suite.  Work was carried out in collaboration with Goodbye Kansas to ensure there was a consistent approach and look between the online fixes and the external VFX.  With over 100 land/sky replacements and 80 screen replacements alone, this was a large amount of work to pass through online.

All finishing for online and grade was completed using DaVinci Resolve, working collaboratively using Resolve Fusion on the grade timeline.  This allowed Blazing Griffin colourist, Colin Brown and online editor Jon Bruce to work on the same timeline in parallel without the need for passing renders back and forth.  With the large amount of online work and external VFX it helped maintain fluency of the projects between the two suites.

Goodbye Kansas led on VFX and created a complex CG water FX and integration with live action photography.  A major VFX sequence involved a fishing trawler being pulled backwards and eventually underwater by what we later find out to be a submarine.  Another involved a person transferring from a live action helicopter onto a CG submarine.

The most challenging VFX work was to develop a trawler sequence combining the live action trawler shoot and VFX elements to sell the action of the trawler sinking. .

VFX work also included various compositing and environment work such as the creation of the fictional Dunloch naval base.  Approximately 180 VFX shots were created. 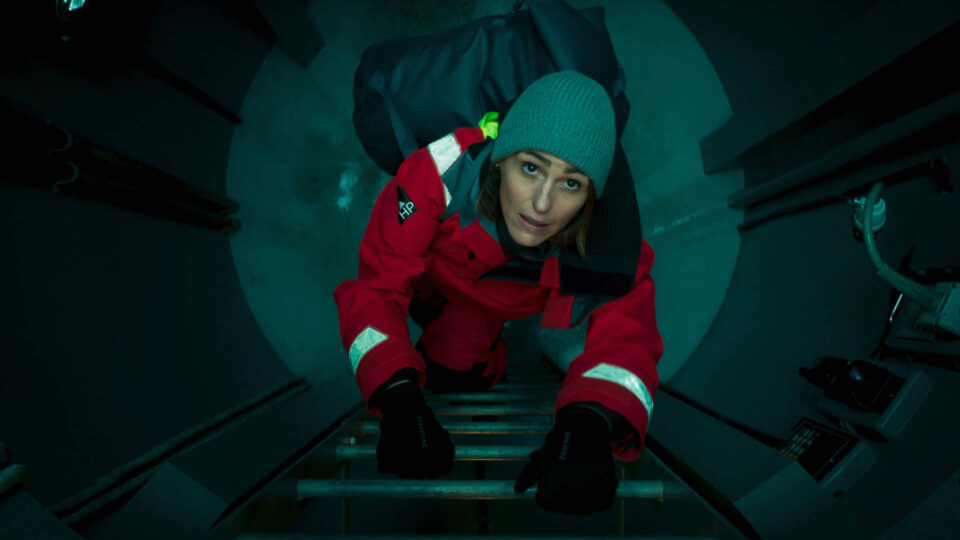 James Prosser, Managing Director, Goodbye Kansas Studios – London, said “It was a fantastic collaboration through a very strange time.  It was a real pleasure working with a great team; Jake at World Productions, James & Isabelle the Directors and Johanne at Blazing Griffin. We are really excited to see the show when it airs.”

Savalas invested a lot of time in preproduction, researching environments and getting a sense of how these spaces might sound, from the Vanguard class submarine control room through to the crews’ mess at dinner time.  An ex-submariner was on board for the entire production to answer questions to help give the show real authenticity.

The first episode opens with an incredible, and complex, set-piece sequence which takes place both above and below the water.  Almost all the above the water dialogue was replaced due to the nature of the incident taking place and the noise on set.  This gave Savalas a greater degree of control to create a rich, intense soundtrack.  A challenging opening sequence, the first five minutes took an entire day to get just right.

To improve efficiency and workflows, Savalas worked with developer Marc Specter using a Dialogue Editor’s Toolkit, Kraken, software that allowed the Dialogue Editor to focus on editing dialogue, whilst it automated many of the jobs that used to take days to complete. Soundflow was used to automate dozens of often repeated tasks.

On one of the quieter sequences involving two main characters, everything was stripped back to focus on the dialogue and foley sounds from the characters’ point of view. Everything is heavily processed (futzed) which adds a real sense of claustrophobia and isolation. It’s all about breathing and movement.

Kahl Henderson, Dubbing Mixer/MD, Savalas said ‘I’m incredibly proud of what the team at Savalas achieved on Vigil.  It’s a beautifully rich soundtrack with some incredible dialogue, fx and foley work.  The best complement to our team is that no-one notices the hundreds of hours of work that went into every episode, and they’re just immersed in it.’