Channel 4 has commissioned of a four-part DIY and homecraft series featuring Escape to the Chateau’s Dick & Angel Strawbridge as part of its Under the Lockdown Academy banner.

Dick & Angel’s Make, Do & Mend (w/t) will see the Strawbridges offering tips and tricks for families looking for imaginative ways to solve their DIY dilemmas using what they have to hand.

Dick & Angel’s Make, Do & Mend (w/t) will be made by Two Rivers Media in a collaboration with Chateau Television, Dick and Angel Strawbridge’s independent production company.  The series has been commissioned for Channel 4 by Sean Doyle, Deputy Head of Features & Formats with Executive Producer Lizi Wootton for Two Rivers Media.

With France also under ‘lockdown’ measures, the series will be filmed entirely by the Strawbridge family at the chateau. There they will communicate online with families from across the UK looking for practical advice and bespoke solutions for a home project of their own. Dick & Angel and their children will also be tackling their own “dream” projects and trying out new pastimes to keep their family entertained.

Dick and Angel Strawbridge say: “It’s humbling that our audience wants to see more of us and our adventures.  Between the pair of us we have nearly a century’s worth of “make do and mend” experience and so we are really excited to be making this brand-new series.  Capturing our life at the Chateau has grown out of a fantastic creative relationship with Lizi Wootton, who we have worked with for over 4 years.  It’s fantastic to be partnering with such an experienced and dynamic team.”

Alan Clements, Managing Director, Two Rivers, says: “This collaboration is a major move for us as a growing, ambitious indie.  Dick and Angel are highly respected presenters and we are very excited to be working with them.  Two Rivers’ ambition is to make programming which is creatively exciting and commercially successful.  Dick and Angel’s Make, Do & Mend (w/t) is the first step in what we hope will be a long and successful relationship with Dick and Angel. We are already in advanced discussions about other projects beyond this initial commission.”

Lizi Wootton, Head of Popular Factual, Two Rivers, says: “Dick and Angel are some of the most popular talent on-screen today.  I’ve worked with them since the beginning of their Chateau journey, when Escape to the Chateau was little more than an idea.  We built the series over nearly five years, developing the on-screen brand and creating something extraordinary together. Now, not only are their ‘Chateau’ programmes in demand all over the world, but their audience wants to see and learn more about Dick and Angel’s adventures. I am thrilled to be collaborating with them again.”

Channel 4, Deputy Head of Features and Formats Sean Doyle adds: “We are delighted that Dick and Angel will be sharing their homemade handiwork with the nation at a time when many of us are taking the opportunity to make fixes around the house and embark on those creative projects we’ve always wanted to do. In these unprecedented times, they will bring great joy, warmth and know how into the sitting rooms, sheds, attics and cupboards across the country.”

After Bake Off, Escape to the Chateau was the highest-rating 8pm origination on Channel 4 in 2019, growing from a short commission into a major TV brand, with series 1 of the daytime ‘DIY’ spin-off series delivering the highest daytime ratings for a new launch in the slot in a decade. It has sold to over 40 territories, from Australia to Angola; Canada to China .

Dick and Angel’s Make, Do & Mend (w/t) was commissioned by Sean Doyle, Commissioning Editor, Features and Formats, at Channel 4.  A Two Rivers/Chateau Television co-production, it is Exec Produced by Lizi Wootton for Two Rivers Media. 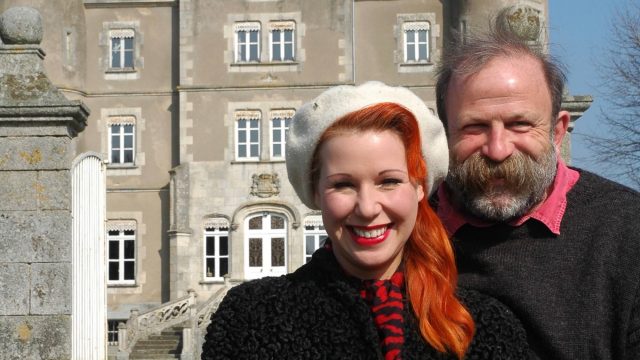