“The FX3 was designed to turn creative vision into reality,” said Yann Salmon Legagneur, Director of Product Marketing, Digital Imaging, Sony Europe. “It allows creators to bring their visual expression into the world of cinema through immersive content. We will continue to support the world’s creators through Sony’s Cinema Line Series.”

The FX3 comes with a full-frame, back-illuminated Exmor R CMOS sensor full-frame 10.2 megapixel count for movie recording (and 12.1 effective megapixels for stills) and the BIONZ XR image processing engine that team up to “ensure high sensitivity with low noise.” The standard ISO range is 80 to 102,400 (expandable to 409,600 when shooting a movie), and dynamic range is 15+ stops.

In-camera 4K recording is [possible at up to 120 frames per second. Smooth slow-motion imagery (up to 5x) at QFHD (3840 x 2160) resolution with autofocus provides “new expressive capability.” 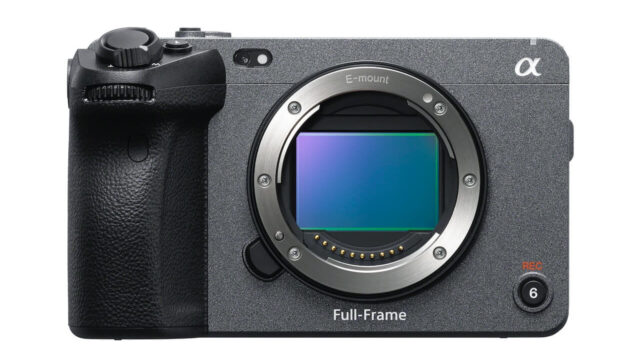 The FX3 is aimed at handheld shooting, gimbal and drone-mounted work. It weighs 715 grams, including battery and memory cards, and the body is 77.8 mm high, 129.7 mm wide and 84.5 mm deep – without protrusions.
The FX3’s body features five thread holes (1/4-20 UNC) to  attach compatible accessories while remaining light enough for handheld shooting and making it easy to carry and set up. The supplied XLR handle unit  attaches to the body via the Multi Interface Shoe without any special tools and provides three additional thread holes for accessories: two on the top and one on the end. External monitors, recorders, wireless microphone receivers, the accessory shoe kit (cold shoe plate), or other add-ons can be securely attached.

The FX3 offers Fast Hybrid autofocus (AF) by using the 627 points[ix] focal plane phase-detection system during movie recording. The camera is also has Touch Tracking (Real-time Tracking) and focus is maintained with Real-time Eye AF. Other AF features have been included and refined in response to feedback from professional users, including AF Transition Speed, AF Subject Shift Sensitivity, intuitive control and AF support when focusing manually.

The buttons frequently used in movie shooting such as ISO, iris, and white balance adjustment are located on the grip and on the top of the body. The design allows solo creators to control the buttons with one hand. In addition, 140 functions are assignable to 15 custom keys.

The zoom lever located on the top of the grip controls compatible powered zoom lenses and also allows Clear Image Zoom to be used with unpowered zoom and prime lenses with less image degradation – reducing the number of lenses required for many projects. This lever also enables smooth zooming that is difficult for manual zoom-ring control.

Recording lamps (tally) are provided on the upper front and rear of the camera, so that operator can easily distinguish when the camera is rolling. A side-opening vari-angle touch-panel LCD monitor allows for easy operation and is suitable for gimbal-mounted shots, complicated angles, handheld operation and so on. Flexible Exposure Mode allows the FX3 to have a similar Auto/Manual switch operation as other FX series cameras for aperture (iris), shutter speed, and ISO, which can be set independently.A short press of the assigned custom buttons enables switching between locking the dial / Manual, and a long press on the custom buttons allows on-off switching of Auto setting. 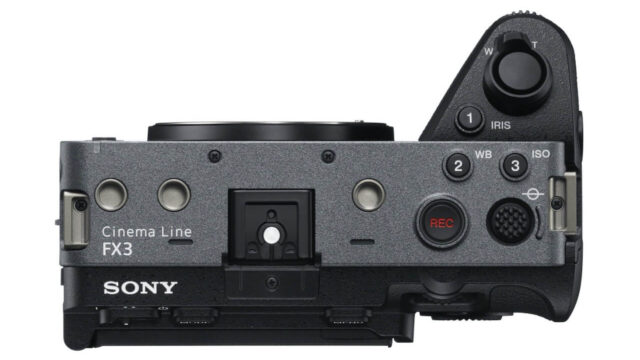 The FX3 is compatible with several recording functions including S-Log3 gamma with S-Gamut3. Cine colour space to preserve rich colour and gradation, that can record in a high dynamic range and wide colour gamut. It also supports internal recording in XAVC S™ and XAVC S-I formats in 4K (QFHD) and FHD, and XAVC HS™ (MPEG-H HEVC/H.265, 4K only) format. 4K 60p video in 10-bit 4:2:2 or 16-bit RAW format can be output to an external device via the FX3 HDMI Type-A jack.

The FX3 also offers fast, future-oriented media slots with two CFexpress Type A cards.The same data can be simultaneously recorded to both cards for backup, and a “relay” mode will automatically switch to the second media card when the first media card becomes full during recording.

The new FX3 full-frame Cinema Line camera will be available March 2021 and will be sold for approximately £4,200 and €4,700, at a variety of Sony’s authorised dealers.