Features & Opinion07.07.17
Slave to the rhythm: How Baby Driver was edited

For Edgar Wright’s heist movie Baby Driver, the action – from car crashes to fingers drumming on a table top – had to cut exactly to the film’s score. Editor Paul Machliss explains how it was done.

What was the starting point for you?
We were talking about the film back in 2011. Edgar had already chosen the tracks. Then we arranged them so they could segue and we could put sound effects in between each as place holders to give Edgar the inkling of where he would ultimately take it. In 2012 we did a big table read of the script in LA. He sent that audio to me and we effectively put together a 100-minute radio play of the entire film. It had all the dialogue, music and sound effects, which could be given to producers to say ‘This is the film and we’ve just got to put the pictures on top of it.’

How different was the editing process?
It’s never really been tried to this level. Every scene in the film has an associated piece of music that’s not just background, but each track is pertinent to the scene. Also, each track works within the scene whether its diegetic or the action synchs with the track, or not even action, just regular things like answering phones or opening curtains. The way Edgar’s gone about it is unique.

The shoot must have involved meticulous planning?
In 2015, Edgar worked with [editor] Evan Schiff in LA. They put together animatics for a lot of the sequences. I came on board in January last year and completed any outstanding animatics. We then had another step on from that radio play, we had the animatics too. Because you can’t just turn up on set and hope something like this is going to work.

How did you work on set?
That was the most interesting part of this film for me. During the reshoots of Scott Pilgrim and on World’s End, I’d bring the Avid to the set, take a feed off the video assist and make sure that it was all going to work. This time Edgar said that ‘considering 90% of this film has got to be bang on the music I think I’d like you down on set almost all of the time.’ I became part of the crew. I had my little Avid Media Composer kit on a trolley and I was connected to video assist. It was seat of your pants stuff. Edgar would yell ‘cut’ and turn to me and say ‘how is it?’ We had to do that because you can’t be in the cutting room six months later and realise we missed something.

Did plans meet reality once you got on set?
One motto we had for the film was we were going to use as little green screen as possible. All the stunts, all the driving, all the action actually happened on the roads of Atlanta. So you want to make sure when you’re shooting it you get it right. You knew by a certain beat in the track or by a chord change or fill the car had to be at a certain point. If the shot was a second longer than it should be you couldn’t change the music later, we had to make it fit. That is the whole purpose of the film. The music is driving everything – a drum or guitar line or vocal squeal will tie to something Edgar has pre planned. Hence the animatics, hence the idea of working out every shot. The real challenge was to make all that work out in real life. We got away with it just about. 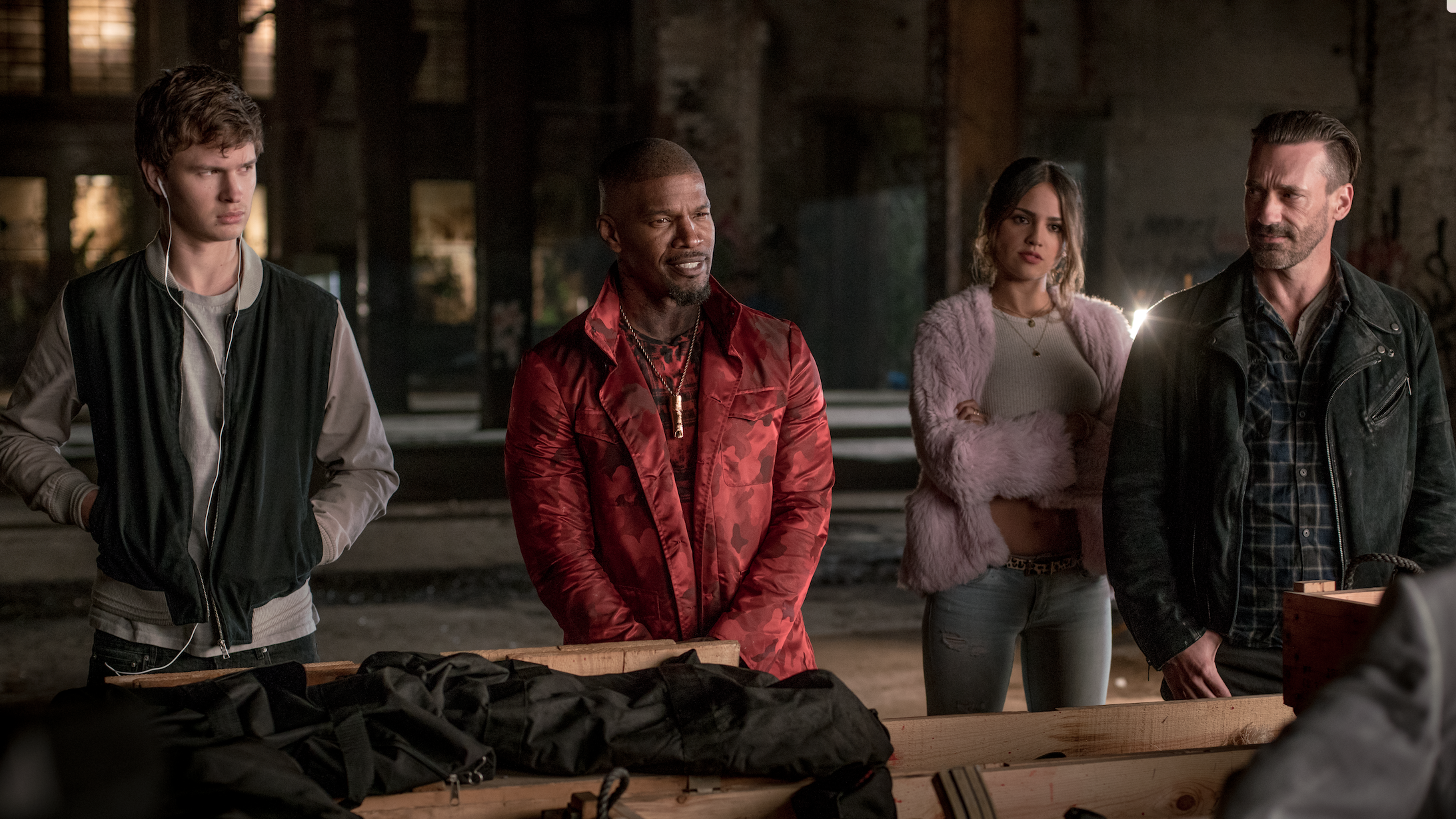 Was there any way you could tweak things in post production?
You may have to be a little bit judicious with the track and find a point to loop a bar a couple of times. But it has to be a part of the track that can do that and doesn’t feel like you’re looping it. You have to stay true to the song, you’re not doing bad edits. The whole film has an amazing flow to it. You can watch this film as a good old rollicking action film and enjoy it just as it is. But you can also go back and watch it another time and see how meticulous it is on every level.

How long were you editing for after the shoot?
We did go into a full seven months post production schedule. We were joined by friend and fellow editor Jonathan Amos. Jon was able to take the action scenes and kick them up several notches while Edgar and I went through the whole arc of the film and made sure everything else was working. That meant that come the start of august when we had to show the film to the studio for the first time it was in a very good state. I learned from Edgar early on to get it to a really good state before showing it to producers. Let’s make it sound like we want it to sound even though it’s in the offline on the Avid. That helps immeasurably. You’re hearing backing tracks, Atmos, spot effects and if the dialogue’s got to be tweaked we’ll do that too so we’ll present the studio with as well rounded film as we possibly can.