RED DIGITAL CINEMA has unveiled its new V-RAPTOR 8K VV camera, its first entrant into the next generation DSMC3 platform.

The camera is RED’s most powerful to date. It features the highest dynamic range, fastest cinema-quality sensor scan time, cleanest shadows, and highest frame rates of any camera in RED’s lineup.

Priced at $24,500, a white ST version of the camera is available today. The black version will be available in larger quantities before the end of 2021. RED also announced a forthcoming XL camera body will be released in the first half of 2022. The XL will be aimed at studio configurations and high-end productions, based on feedback to the RED RANGER body style.

V-RAPTOR features a multi-format 8K sensor (40.96mm x 21.60mm) with the ability to shoot 8K large format or 6K Super 35. Joining its predecessor, the MONSTRO 8K VV sensor, this in-camera option allows shooters to leverage any of their large format or S35 lenses with the push of a button and always deliver at over 4K resolution.

“V-RAPTOR is more than just its specs. It is a reflection of the ferocity of our team, who have spent the last two years forced apart. Through everything, we found a way to work together closer and better than ever before, fueled by the incredible passion and support of our community of filmmakers. V-RAPTOR takes an impressive array of silicon, seemingly from the future, and mashes it together with pieces of the heart and soul of every RED camera that has come before it,” said Jarred Land, President, RED Digital Cinema 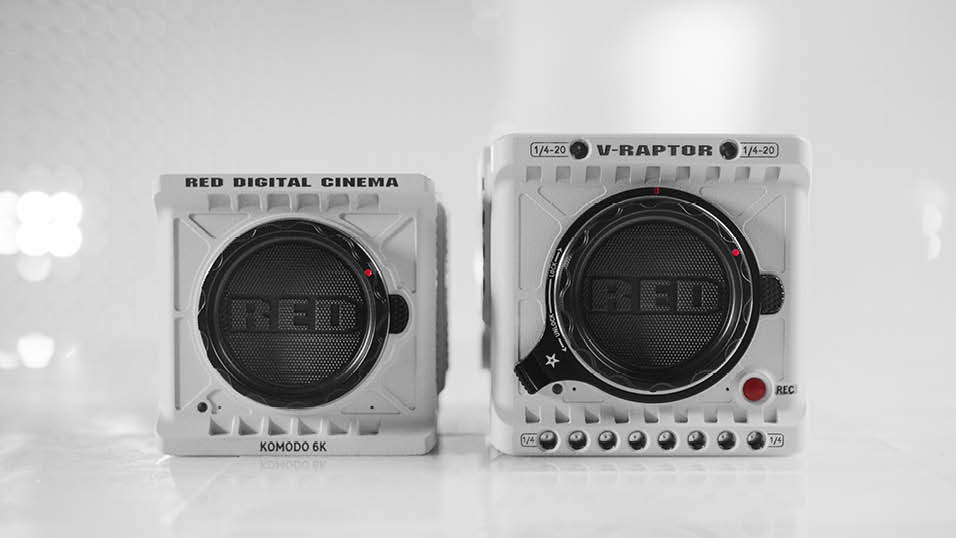 The DSMC3 camera is built on a newly integrated and modernized form factor while featuring a robust professional I/O array that includes two 4K 12G-SDI outputs, XLR audio with phantom power capability via adapter, and built-in USB-C interface allowing for remote control, ethernet offload, and more. All features are packaged in a compact, rugged, water, and dust resistant design that measures 6 x 4.25 inches and just over 4 pounds. Other highlights include an RF lens mount with locking mechanism; wireless control and preview via Wi-Fi; phase detection autofocus; and a newly designed and integrated display, located on the side of the camera, which allows for comprehensive controls, including in-camera format selection, customized buttons, status updates, and more.

As with RED’s most recent camera, the RED KOMODO 6K, V-RAPTOR utilises the updated and streamlined REDCODE RAW settings (HQ, MQ, and LQ) to enhance the user experience with simplified format choices optimised for various shooting scenarios and needs.

Additional features include data rates up to 800 MB/s using RED branded or other qualified CFexpress media cards; integrated micro v-mount battery plate; a 60mm fan for quieter and more stable heat management; and wireless connectivity via the free RED Control app, which is available now for iOS and Android devices.

“We at RED are truly thrilled to finally show off V-RAPTOR to the filmmaking community around the globe. The fact that we are introducing yet another groundbreaking camera into the market is a testament to the hard work and dedication of all the employees across the board at RED. It is simply a part of our DNA to continue the brand’s legacy of disrupting the industry and providing filmmakers with the most advanced tools possible to unleash their wildest creative ideas without ever compromising,” said Jamin Jannard

Also announced today from RED is an array of first-party and co-designed accessories. The engineering team at RED worked closely with partners such as SmallHD, Angelbird, Core SWX, and Creative Solutions to create and produce purpose-built products specifically to work with V-RAPTOR.

RED is also launching a pre-bundled V-RAPTOR Starter Pack option that comes with:

In addition, a RED® RF-PL Adapter with an electronic ND filter will soon be available via RED.com and authorized dealers.