Features & Opinion29.01.13
On set: Stephen Poliakoff's Dancing on the Edge

It’s both the sense of scale and the attention to detail that you notice on a set visit to Stephen Poliakoff’s latest drama, Dancing on the Edge. The scale is immediately apparent at the National Liberal Club in Whitehall, so redolent of power and prestige with its portraits of Prime Ministers and monarchs along its sweeping staircases.

The Club doubles up as the location for a 1930s German embassy party in Dancing on the Edge, where the cast, including Chiwetel Ejiofor, Matthew Goode, John Goodman and Janet Montgomery, add to the sense of occasion by wandering around between takes in their costumes of black tie and tails and ball gowns. 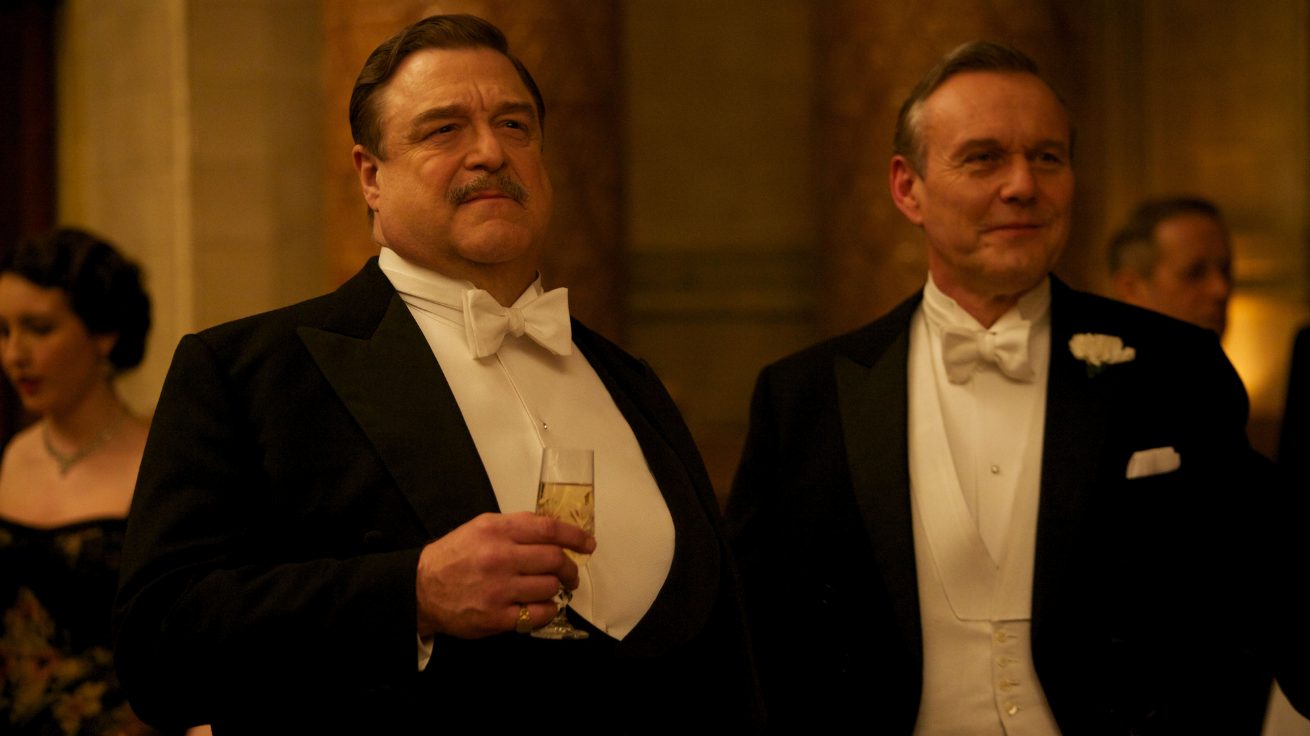 The attention to detail, meanwhile, can be seen in the canapés and champagne that wait to be served for the party scenes: little swastika flags poke out of the period nibbles, while the Pol Roger champagne labels date from a 1928 vintage.

Poliakoff, who’s clearly in command of the set and fiddles constantly with a yellow straw during and between takes, has long been regarded as one of television’s leading dramatists, with credits including Shooting the Past,    Perfect Strangers, The Lost Prince and Gideon’s Daughter. He wrote and is directing Dancing on the Edge, the story of an early 1930s black jazz band who find fame amongst the parties of London’s upper class society. It deals with many of the issues of the 1930s – from the glamour of a post-recession and pre-war society, through to immigration, racism and the rise of fascism.

Poliakoff’s script made it clear from the very beginning that Dancing on the Edge would be a very large-scale project, and so it has proved. With a crew of 90, a starry cast, a 12 strong band, an original score, as well as a string of impressive locations, the five-part drama series has a £7.8m budget.

The scale of the piece meant that the BBC’s budget could not cover the entire production, so producers Ruby Films had to stitch together the shortfall. At one point, says executive producer Faye Ward, it looked as if the production would have to go out of the UK in search of budget, with Ruby considering making it as a Canadian or Irish co-production.

In the end Ruby managed to find backers, including US sales company Endgame, international sales house ITV Studios Global Entertainment as well as UK post outfit LipSync and regional fund Screen West Midlands.
To make the most of the £7.8m budget, the production schedule has been very tight with 16 weeks of back to back shooting.  “It’s been very intense,” says producer Nicky Kentish Barnes, who describes weeks of moving from “one vast location to another.” Birmingham’s Grand Hotel and the Banqueting Suite of the Council House – two remnants of the city’s Victorian heritage – doubled up as the ballroom and the lobby of the hotel where much of Dancing on the Edge is set. National Trust properties Upton House in Warwickshire as well as Fenton House in Hampstead were also used, along with Syon House in London. Filming has been like “a massive jigsaw puzzle,” says Kentish Barnes.

The look of the drama is, as with all Poliakoff pieces, also crucial. This is his first project in a 35-year career to be shot digitally. Poliakoff originally planned to shoot Dancing on the Edge on Super16 film, as he has most of his dramas.  But DoP Ashley Rowe recommended shooting in HD – and in particular to use the Arri Alexa.

“He really was quite dead against it,” recalls Rowe, “and wanted to shoot on film. So we shot some tests and showed them on the big screen. And he liked the look of them.” Rowe says he has been very impressed with the camera’s sensitivity, particularly in low light. “The fastest film stock I use is 500ASA, and this camera is rated at 800ASA – it sees everything. So I am putting in very little field light, because it just sees into the shadows.” Rowe describes the lighting as “dark and moody” – and “very real.” Which neatly sums up, one imagines, Dancing on the Edge itself.