Preliminary site work is expected to start in the second half of 2022 with construction beginning in 2023 and the potential delivery of the project by year-end 2025. Blackstone and Hudson Pacific say the project will create over 4,800 jobs in Broxbourne and the surrounding area and contribute more than £300 million annually to the local economy.

Funds managed by Blackstone and Hudson Pacific will transform a 91-acre site into a state-of-the-art, 1.2 million square-foot studio campus, creating one of the UK’s largest film and television production locations. The project will include 21 sound stages totalling 470,000 square feet, 420,000 square feet of workshop and mill space, and 250,000 square feet of stage-adjacent production office and support space as well as amenity, basecamp and backlot spaces.

James Seppala, Head of Blackstone Real Estate Europe, said: “We would like to thank Broxbourne Council for its valued input and we are excited that our expanded partnership with Hudson Pacific will deliver a world-class studio facility to be used by homegrown and international talent. Sunset Waltham Cross Studios will be a world-renowned hub for content creation and creativity that will help assert the UK’s role as a premier destination for creating entertainment and is yet another demonstration of our commitment to investing in the UK.” 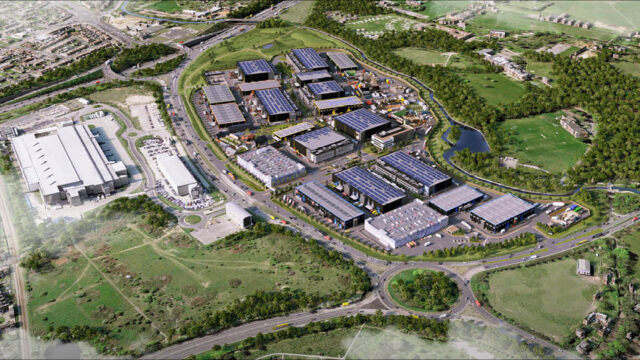 The new studio will target LEED Gold certification and a BREEAM Excellent rating which would put the development in the top 10% of buildings in the UK in terms of its sustainability performance, with energy efficiency and biodiversity central to its design and development and “extensive sustainability initiatives will lower the carbon impact of every production filmed at the studio.”

Planned stages will have up to 50-foot clear heights with varying sizes to accommodate various types of production.

Sunset Waltham Cross is Blackstone and Hudson Pacific’s first expansion outside of the US for its jointly owned Sunset Studios, which now comprises five facilities and over 60 stages. Sunset Studios facilities have hosted legendary productions such as When Harry Met Sally and La La Land.

Victor Coleman, Chairman and CEO at Hudson Pacific, said: “We are thrilled that in less than one year since we announced this exciting expansion of our relationship with Blackstone, we are ready to begin site work with the ability to start construction next year. With demand for state-of-the-art studio space rising globally, this 21-stage project will bring much needed supply to one of the fastest growing media markets in the world, leveraging our development and operational expertise along the way. Importantly, the project will result in the creation of more than 4,800 jobs in the local community and we are taking a highly sustainable approach which is central to Hudson Pacific’s and Blackstone’s core values.”

Aria Studios in North Wales has now officially opened. The new 20,000 square foot fully soundproofed film and television studio is located on the doorstep of the region of Eryri (Snowdonia) and has been established by Rondo >>>

The Shoot20.01.23
Lionsgate renews Outlander S8 plus spin off series

LIONSGATE+ has announced a renewal for an eighth and final season of  time-traveling fantasy drama, “Outlander,” and a greenlight for the LIONSGATE+ Original Series, “Outlander: Blood of My Blood,” a prequel series from Matthew B. Roberts, Ronald >>>