On its release in 1981, the German film Das Boot was quickly declared a true epic of European cinema.

So when Sky Deutschland and Bavaria Fiction announced they were collaborating on a TV series sequel, anything short of brilliance would have been fatal.

After the first series of Das Boot saw sales to over 100 territories backed up by critical and popular success in 2019, a second series was commissioned and went out to similar praise this year. A big part of the series’ success is the use of Dolby Atmos, the immersive three-dimensional audio technology.

You can’t get more intense than life on a military submarine, and a key to achieving immersive intensity was audio. Creating the best possible audio environment for the story had a lot of dramatically different challenges. “We had multiple strands – two storylines in the first season and three in the second,” explains Marcus Ammon, Senior Vice President Original Production, Sky Deutschland. “On sea, on land, in the world of refugees and 1940s New York. So many different soundscapes were needed to give each its unique experience.”

Moritz Polter, Executive Producer International Television Series, Bavaria Fiction, had to create those soundscapes. “Dolby Atmos’ control of 3D object positioning absolutely helped. Obviously in the strand inside the U-boat, the sounds tell the audience so much. When you’re on the surface, sounds come from around – underwater, from above. But Dolby Atmos was also so good with the other strands.”

For example, the New York strand needed to reflect a city that’s loud in all three dimensions. “It’s a skyscraper city,” says Polter, “and in the second season we played a lot more with ambience and colour. People living in a flat had neighbours above and below. The shouting, the radio playing upstairs, dogs barking… we were able to really play with that, build a complete environment. And when you were in a more upmarket situation, the soundscape reflected that. We were so lucky to have Dolby Atmos. It gave us so much to play with we couldn’t have played with before.” 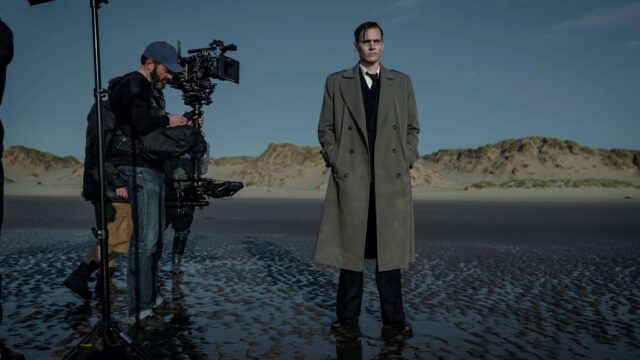 As the production team learned what Dolby Atmos could do, they found it had some unexpected aspects. “It is high definition, high resolution,” says Polter. “You might think that it would come into its own during battle scenes, with depth charges going off all around, but anyone can do that. What we got was new ways of working with quietness.”

Ammon agrees: “Of course, the loud moments will stick with you. You’re there being bombed from all sides. But the very quiet moments when you’re on the boat, the whole crew is waiting for the next attack and nothing is being said. You hear the silence differently. It’s equally exciting and the audience reaction [at the premiere] was fantastic. People were talking about it for days afterwards, how amazing the complete experience was, how awesome the sound was. I heard from colleagues all over. It was the best day of my creative life in television.”

Polter adds: “It underlined the claustrophobia that these people are in. As the audience, you feel it differently when the quality is higher. The water dripping, the metal of the hull creaking, it’s completely immersive, and that’s Dolby Atmos. The audience was on the boat that evening.”

One of the challenges of any new production technique is learning what level to pitch it at. Underuse it and it’s not worth having, overuse it and you can break the spell, pulling the audience out of the story. What should be immersive becomes intrusive and detracts from storytelling. Polter found the difference between the two series instructive.

“The directors of the second series had a different style to the director of the first,” he says. “The first series reflected the director’s taste for minimalism. He dialled everything back: less music, fewer extras. Subtlety is the main drive for minimalists. We could be very subtle with audio. If you can introduce something for texture that doesn’t call attention to itself, the scope for subtlety is much greater.” 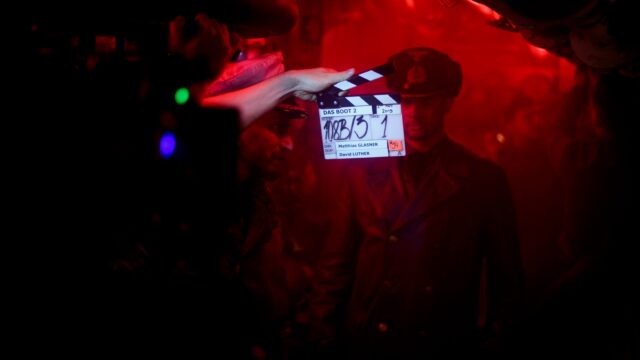 The second series used Dolby Atmos more prominently, building on confidence gained during the first series – confidence backed up by positive audience feedback. But it also came from a different creative imperative. “The directors were more experimentally minded with the camera and the sound,” explains Polter. “So of course there was plenty of room for that too. That’s the approach where the New York apartment atmosphere came from. We could use Dolby Atmos creatively. Instead of reining it in and making it realistic, we could use it to push aspects of narrative. Dolby Atmos fits many tastes.”

Dolby Atmos had a role to play as Das Boot sold into the international market. The dialogue was in German, English, and French – and in television, the dubbing and editing houses that create different versions would normally get a tape of that. With Das Boot, different voices could be treated differently, so the end result could be customised for the needs of each market while keeping as close to the original quality as possible.

“We were in constant contact with the dubbing studio,” says Bavaria Fiction’s Polter, “and there is a new way which Dolby Atmos lets you use more tracks for optional dialogues and optional languages. If they put the work in, they can produce really good international versions. I hope that drives Dolby Atmos uptake across the board.”

One final advantage, says Polter, is how down-conversion produces superior results. “When you mix down to stereo or 5.1, you can still hear the difference. The extra resolution of the format carries through.”

And for the cinephile who must have the best, Dolby Atmos on Blu-ray Disc worked equally well. “Oh, the DVD distributors for Germany, WDR Mediagroup, were very happy with that. The geek crowd, the ones with the home cinema multi-speaker installations, loved it,” recalls Polter.