Behind The Scenes10.12.21
How we made it - American Murder: The Family Next Door

As part of the recent Televisual Bulldog Awards, we asked the winners of each category to tell us the story behind making their show the standout success that it became.

Jenny Popplewell, the director behind American Murder: The Family Next Door, explains how social media allowed the team to capture the unfolding narrative of a horrific crime.

It is not new to tell a story through archive material. But when Director Jenny Popplewell first heard about Chris Watts – a family man from Colorado whose pregnant wife Shanann and two young daughters went missing in August 2018 – she was struck by the thought that the story might lend itself to something unique.

“I first saw articles about Chris Watts being arrested after Shanann went missing, then read the social news feeds, and watched the video of him doing a crocodile tears-type interview calling for her safe return,” she recalls.

Then the bodies of his wife and two little girls were found two days after they disappeared, Watts was quickly arrested, then charged with four counts of first-degree murder.

“They seemed such a normal couple,” Popplewell observes. “It just stuck with me.”

When the local police released their bodycam footage, she continues, she “went down the rabbit hole again”. But the turning point came when, some months later, the Colorado Bureau of Investigation released film of an undercover interview with Watts, who was by then serving life sentences in jail, in which he was asked: why?

“It suddenly struck me how this felt like the first time a crime had been captured entirely on camera. There have been some amazing archive documentary portraits. But this felt like it would be an unfolding narrative,” she says. Played out through Ring doorbell footage, social media, phone cameras, police bodycams, and Shanann’s text message digital legacy, it is, she adds: “a story for our times.” 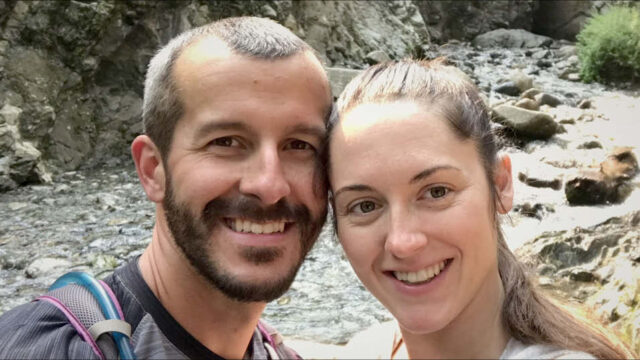 Through Freedom of Information requests and a small fee, Popplewell accessed a vast quantity of footage and then met Shannan’s family in America.

“There had been earlier documentaries about Shannan and Chris, but never with their involvement or knowledge,” she explains. “We wanted Shanann to be at the centre of this story – not the murderer, as is the case with so many true crime films – and they were happy about that.”

So happy, in fact, that the family handed over Shanann’s laptop and mobile phone giving carte blanche to the team – so long as nothing was used that might embarrass.

The film was made in an intensive 26-week edit led by Editor Simon Barker, the first stage of which involved the meticulous and time-consuming task of going through every piece of material, organising it, date ordering and labelling it so nothing disappeared.

Meanwhile, Popplewell conducted background interviews to understand how to represent her in the film accurately.

“Seeing Chris lie on bodycam, under interrogation, and in all the other content is incredible. As is the fact that Shanann is the only honest witness of events which she tells us about as they happen through social media and text messages,” she observes.

“We wanted the audience to feel they really knew Shanann. All too often, victims in crime documentaries when they do have a moment are presented as having lit up a room, or having the best smile, or being sorely missed. So it was important to show her in an honest, multi-dimensional way.”

A key strength of the finished film is that it immerses the viewer in events while allowing them to work things out for themselves, creating a depth of engagement that Popplewell believes a standard re-telling involving interviews would struggle to match.

“We’ve been conditioned to hearing true murder stories and you can become a bit desensitised to it. The fact we know so many people have been affected by having watched the film is really important,” Popplewell believes.
“We need to refocus on familicide, femicide, violence against women. We need to remember these are real stories about real people, not just numbers. And we need to be aware they are an ever-growing problem everywhere, in every country, and in ordinary families.”

To tell it any other way would be a disservice to Shanann and her memory, she adds.