Exclusive: For Paramount+’s new TV series adaptation, Halo, which released this March, MPC artists worked on over 400 shots from epic battle scenes to recreating key characters for the series.

MPC VFX Supervisors Craig Calvert and Tim Ledbury, together with VFX Producers Nick Colangelo and Nicola Kingham, led the project from the Toronto and London studios.

Here, VFX supervisor Craig Calvert explains how it was done.

What was MPC’s contribution to Halo?

MPC helped bring the much-loved Halo Universe to life for fans and new audiences worldwide via Paramount+’s new TV series adaptation, which was released on 24th March 2022. Dramatizing an epic 26th-century conflict between humanity and the alien threat known as the Covenant, Halo the series weaves personal stories with a large dose of action, adventure, and a richly imagined vision of the future.

The core of MPC’s work on Halo was bringing the iconic creatures and epic battles to the screen. We focused development on the Sangheili (Elites), Prophets, Lekgolo, and digidouble Spartans used throughout the series. Much of the large battles were MPC sequences, including the surprise attack on Madrigal Outpost and the brutal Covenant assault on Eridanus. The Lekgolo ambush on the UNSC Corvette and all additional Prophet and Sangheili closeup and dialog shots throughout were brought to life by MPC teams. 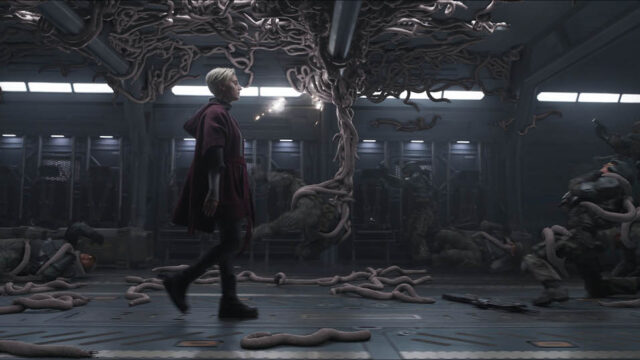 What were the expectations and approach to the visual effects?
From the outset, we were guided that this iteration of Halo would strive to be physically grounded and bring the fantastical aspects of the Universe into a more realistic setting. Being huge fans of the series, we drew from the immense catalog of reference material and worked to bring in elements that would fit this grittier world. 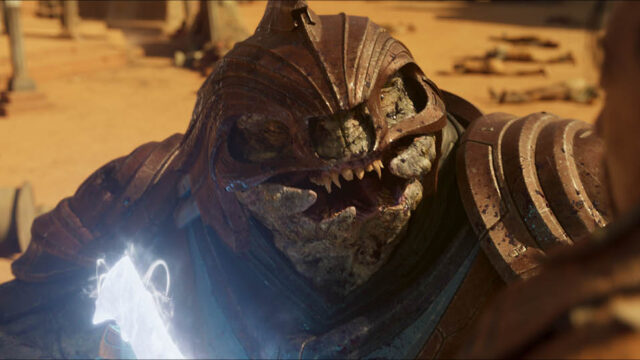 How did you organise the work between the teams?

The Toronto team started early in development and focused on creature design and creation of the various Sangheili, Prophets, and Lekgolo, as well as all of the digidouble Spartans, Energy Sword, Plasma weapons, and shield effects shared with multiple vendors. The opening attack on Madrigal was a key sequence with Toronto handling all creatures and digidouble work within, spanning 120+ shots of gory mayhem! Additional sequences included the Sangheili searching the garbage world of Oban, the horrifying Lekgolo attack, the Spartan fight, the finale Temple extensions and interior combat, and every Prophet shot in the series. It was a lot of fun!

The London team concentrated on the fifth episode, ‘The Reckoning,’ in which human UNSC and alien Covenant troops engaged in a spectacular and chaotic battle scene to possess an ancient artifact on the planet Eridanus. They focused on creature work/animation for close-quarters fighting between humans/MC, digital doubles, energy weapon FX including CG fire, smoke, and dust combined into the location photography with some shots requiring over 100 CG elements. Not to mention all the CG explosions, burning debris, plasma, alien bodies, blood, gore, entrails, and more! 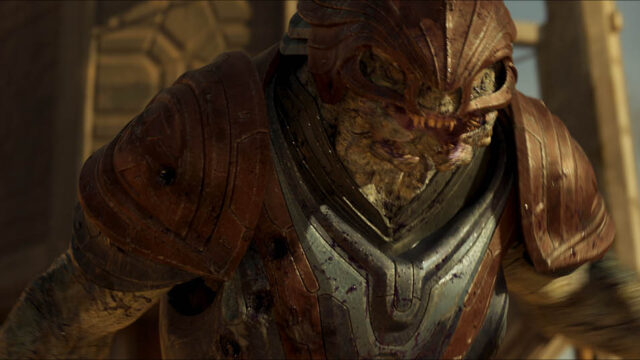 Can you elaborate on the stills of the worms?

The Lekgolo worm attack was a joy to work on and brought some of the horror elements of Halo into the show. These swarming Lekgolo worms were an almost entirely procedural setup that could wriggle across surfaces and around their targets. Sheets of Lekgolo traveling across the floor and ceilings, through gaps and over obstacles, compressing against surfaces and each other, were all procedurally animated. They could be directed to wrap around and constrict victims, as needed in a shot, or form together into the large grabbing tentacles for bigger actions. For specific hero moments, hand-animated worms were placed alongside the swarm to give more directable actions. 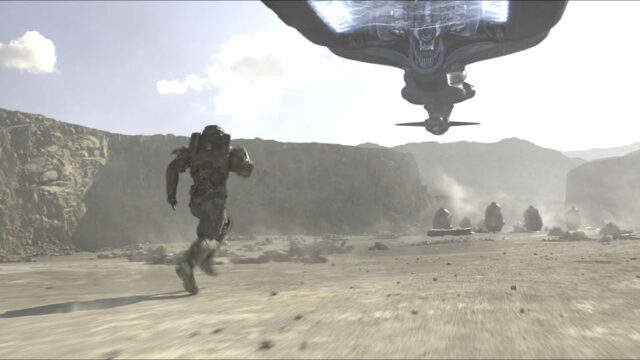 Can you elaborate on creating the environments?

Many different vendors worked to create the environments throughout the series, with our work focusing on the ancient Temple featured in the final episode. The plateau was a massive collaboration between multiple vendors, with the sequences being roughly divided as “inside” and “outside” of the Temple. We handled the majority of “inside” work, including building and sharing the full Temple asset used to extend the roughly 12’ practical walls into a vaulted ceiling. Exterior closeups we similarly extended with the weathered asset, with distant shots for all vendors being the full CG Temple.

Which shot, or sequence was the most challenging?

The Prophets were a wonderful mix of traditional onset puppetry and CG takeover of the head and neck. A practical character version was built for the actor to respond to and for lighting and shot composition reference. A performer was within the setup manipulating the arms and body, while external puppeteers guided the long neck. Later we painted out the head and neck, adding back in our CG version with an updated and refined performance. Layers of skin jiggle and bushy eyebrows were added to complete their look.

The Prophet of Mercy had the most screen time, and it was our main focus to give weight and depth to each delivery. We spent over a year refining his skin lookdev and eye shading to give him that aged, sunken, cataract-ridden feel yet still feel photoreal and menacing. He was a real treat to bring to life! 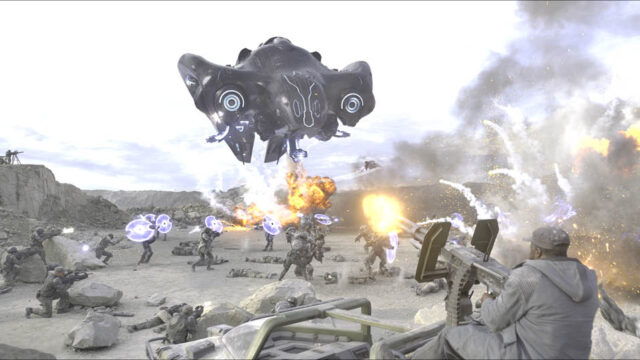 What is your favorite shot or sequence?

There are so many excellent action-packed moments to choose from! But among my favorite shots in the series are: Atriox first appearing with his epic glare at Master Chief through the clearing dust and the Prophet of Mercy arguing with Makee in the Council Chambers.

Each of those moments shares that they are relatively calm amidst an action-packed show, and the work the teams put into them really shines through.