Leading commissioners, producers, directors, financiers and distributors gathered at BAFTA for two days last month to discuss and debate the state of factual television at the Televisual Factual Festival.

The festival took place on the same day as the surprise election of Donald Trump as president of the United States. Both his election and Brexit, admitted many of the speakers, had caught broadcasters and the media completely off guard.

As a result, many said that the TV industry had to do more to successfully represent – at least in the UK – the 52% who voted for Brexit and to look more closely at the reality of life in 2016.

BBC2 channel editor Patrick Holland asked: “The challenge on BBC2, but also the challenge for you as programme makers, is how do we respond to this changing world?” The answer, he suggested, was “not to shy away from complexity” in storytelling. “We need to engage with what the world is that we’re living in and what the world is that we’re travelling towards.” As an example of a series that tackled the complexity of the world head on, he cited BBC2’s acclaimed documentary Exodus.

Channel 4’s factual entertainment boss Kelly Webb-Lamb said she wouldn’t want to directly commission a show about Brexit or Trump. “But we need to think about what those things say about us as a world and Britain.” That might mean making shows that celebrate Britain, “looking at what we do well, who we are and feeling good about ourselves.”

Webb-Lamb also suggested that programmes need to be rawer and more honest.  “We need to answer the “everything feels a bit scary” question.” She called on programme makers to “go another step further” to really get what people’s lives are like and how they feel about them. “Even on Channel 4 there’s a sense of wanting to mitigate against that a little bit and make things a comfortable watch.”

Similarly, the BBC’s acting head of formats and features Donna Clark asked the audience of producers and development execs to think about how they could incorporate Brexit and the Trump election, if not directly, then tonally into their format ideas.

Clark suggested that lack of diversity in the TV industry had been one of the reasons for its surprise at the events of 2016.  “I think we’re a bit posh, we’re a bit white and we’re not particularly representative of everyone. When we think about today, we don’t represent that 52% either. I think that that often comes from the fact that, if you did a little poll of the commissioning teams, our politics and the sort of people that we are, we’re of a sort, of a strata and we need to try to represent everyone a bit more.”

Some recent commissions, she said, had tapped into the wider experiences of the UK.  She cited Eat Well For Less on BBC1. “That feels just a bit more universal somehow and not quite so posh.”

Echoing the call for TV to more fully reflect the world we live in, Channel 4’s head of documentaries Nick Mirsky called on producers to “think about spaces and places we’re not supposed to be. Think about places where you can’t ring up the press officer of a hospital or an airline and ask for access.”

Mirsky continued: “If I were a Martian and I landed in Britain today and I had to form a view of British society based particularly on Channel 4 documentaries but on docs generally, I’d probably think that we had entered this golden world of public services where you are ushered into life by the One Born midwives and where you were educated by the great teachers of Educating Yorkshire and, if anything went wrong, the staff of A&E or the coppers on 999 made the world safe for you.”

While praising those shows, Mirsky said they create the slight illusion of a more orderly, safer, controlled world than the one we actually live in.

“Therefore, those projects such as The Paedophile Hunter, Skint, Benefit Street or BBC2’s Exodus, where you feel quite how unstable, chaotic and unsafe the world is, are particularly precious…I would like more programmes that reflect that.”

By contrast, Channel 5’s factual commissioning editor Emma Westcott said that viewers were after certain kinds of shows given the “incredibly uncertain world that we live in.” She cited programmes which have “personal endeavour and incredible industry” like The Great British Bake Off. She added: “I’ve got a lot of life change things coming through where you’re watching real people just taking control of their lives: whether you’re moving to Australia or you’re giving up the day job.”

Mirsky admitted that on-demand platforms like Netflix and Amazon are starting to put pressure on factual departments in traditional broadcasters. “Somebody told me that there were 2m less people watching [terrestrial] TV last weekend than last year because The Crown was released.”

Platforms like Netflix are winning more subscribers, he admitted, many of whom are watching their dramas. “In some way that is scary, but it means we have to move the bar…We have had a golden period where documentaries are foregrounded on most channels, but competition is coming and we need to look out for it.”

“Truth is stranger than fiction,” said ITV controller of factual Jo Clinton-Davis. “And there is a hunger for the truth.” She said the best docs at ITV have to be as big in scale and as compelling and full of twists and turns as drama. She cited ITV hit Long Lost Family. “Some of those episodes could be a single drama – you couldn’t make them up.”

Channel 5 factual commissioning editor Guy Davies admitted that no factual show could compete with The Crown’s £100m budget. “In terms of factual output, we have to innovate and be fleet of foot. We can’t rest on our laurels.”
BBC acting head of documentaries commissioning Clare Sillery noted that docs can successfully borrow certain things from drama – such as scoring, storytelling devices and camera and lens technology.  She also underlined the need for documentary to reveal the complexities of modern life. 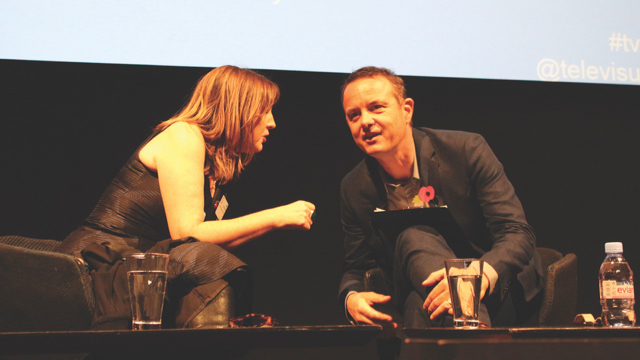 She admitted that from the outside, ITV’s factual could seem ‘slightly timid, a bit too conservative and a bit too middling – and that doesn’t get you viewers.”

She said big factual entertainment returnable formats were a key priority at ITV, citing shows on rival channels such as The Apprentice, Gogglebox and Bake Off.

Murphy noted that ITV doesn’t have many competitive formats and that many of the big current competitive shows on rival channels are past their heyday or have peaked. A food competition format is a priority. “With Bake Off going [to C4], it feels like game on.”