Drone manufacturer DJI has introduced the the $799 Mavic Air to its line up.

DJI describes it as an “ultra-portable, foldable camera drone.”

The Mavic Air keeps many of the features of DJI’s Mavic series with a 4K camera, new QuickShot modes and SmartCapture and FlightAutonomy 2.0 with Advanced Pilot Assistance Systems for smarter, safer flight. 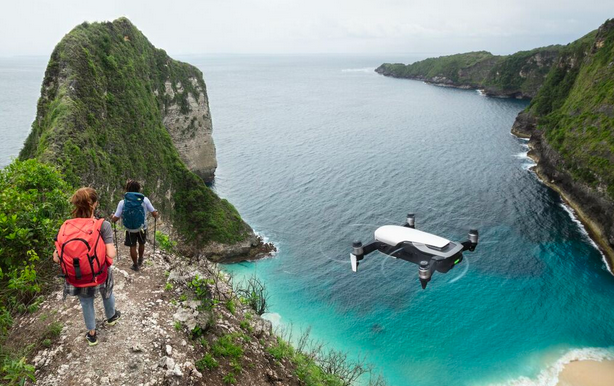 It weighs in at 430 grams, and its folding arms and propellers make it roughly the size of a smartphone when folded.

The recessed three-axis mechanical gimbal is suspended from dampeners to further reduce vibration.  The camera houses a 1/2.3” CMOS sensor and the equivalent of a 24mm F2.8 lens (on a 35mm full frame sensor).

It photographs 12-megapixel still images using new HDR algorithms. It also shoots 4K video at 30 fps, capturing the “highest quality video of any DJI consumer drone” with a maximum bitrate of 100 Mbps. It has the ability to shoot 1080p slow-motion video at 120 fps.

Mavic Air is DJI’s first drone with 8 GB of onboard storage  plus a micro SD card slot for additional storage capacity. It also has a newly-added USB-C port.

QuickShot intelligent video modes allow predefined flight paths that automatically keep the subject in the frame. Users can use Rocket, Dronie, Circle, or Helix plus two new modes Asteroid and Boomerang. Asteroid starts with a spherical image that zooms in as it descends toward the subject on the ground, while Boomerang circles the subject in an oval-shaped flight path with the video finishing at the start point.

Mavic Air’s ActiveTrack intelligent flight mode has been improved to automatically sense multiple subjects,  following the subject and keeping it in the frame with more precision during high motion activities.

With a maximum range of up to 20 feet (6 meters), users can give hand gesture commands to launch, follow, photograph, record, push, pull and land without a remote controller. 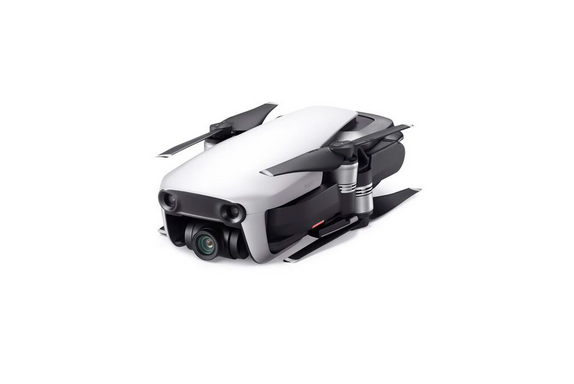 Mavic Air has a maximum flight time of up to 21 minutes. It can fly stably in windy conditions of up to 22 mph (36 kph) and at high elevations of up to 16,404 ft (5,000 m) above sea level. Mavic Air’s remote is the first to feature detachable control sticks that can be stored inside the remote controller for added portability. Its omnidirectional antennas placed on the foldable landing gear help increase signal coverage to deliver a maximum range of up to 2.5 miles (4km) with 720p real-time video transmission when flying with the remote controller. When in Sport mode, Mavic Air flies at speeds of up to 42mph (68 kph) and is compatible with DJI Goggles for an immersive FPV flight experience.
Mavic Air will be available in three colors: Onyx Black, Arctic White and Flame Red. The US retail price including the drone, battery, remote controller, carrying case, two pairs of propeller guards and four pairs of propellers, is $799 USD. The Mavic Air Fly More Combo includes the drone, three batteries, a remote controller, a travel bag, two pairs of propeller guards, six pairs of propellers, a battery to power bank adapter and battery charging hub, for $999 USD.

Pre-orders will start shipping on January 28.

Ashford Borough Council and Quinn Estates have confirmed that  full construction work for Ashford International Studios in Kent will  start on the site at Newtown Works in summer 2023, with technical experts recently recruited to facilitate the >>>

Wall to Wall, with Petterle Films and Viva Productions, is behind HBO Max documentary series Flordelis: A Family Crime, scheduled for release in Brazil in December on the streaming platform. Directed by Suemay Oram, the four-parter centres >>>
Prev Post
Next Post
This website uses cookies to improve your experience. We'll assume you're ok with this. I've read this
Privacy & Cookies Policy