Channel 4 has appointed Alisa Pomeroy and Shaminder Nahal as the new Heads of Documentaries and Specialist Factual respectively.

As Head of Documentaries, Pomeroy will report into Ian Katz, Chief Content Officer, Channel 4. She joined Channel 4 in 2015 and has been responsible for programmes including Jade: The Reality Star who Changed Britain, Baby Surgeons: Delivering Miracles; Crime and Punishment, Snackmasters, Barrymore: The Body in the Pool as well as The Family Secret and Undercover Police: Hunting Paedophiles. Forthcoming projects include a series about The Jeremy Kyle Show and The Real AC-12 (w/t).

Alisa Pomeroy said: “I’m excited about the future of Documentaries at Channel 4. The media landscape has changed unrecognisably since I came to Channel 4, but there’s everything to play for and I’m lucky enough to be inheriting an extraordinarily talented team of Commissioning Editors. Together, we plan to discover the next generation of impactful, unmissable programmes, and nurture the best in British film-making talent.”

Check out  Televisual’s recent interview with Shaminder Nahal. This is the third in a series of films – The Televisual Factual Films – for factual producers and filmmakers. 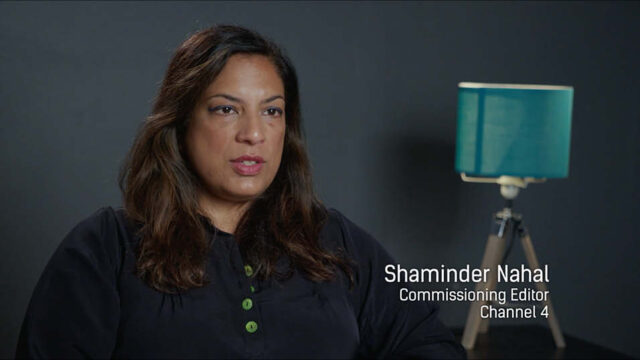 Shaminder Nahal joined Channel 4 in 2017. She was recently at the forefront of Channel 4’s The Black to Front Project with Vivienne Molokwu, and has been responsible for programmes from Grayson’s Art Club, Grenfell: The Untold Story, Empire State of Mind, Diana: The Truth Behind the Interview, 100 Vaginas and Superkids: Breaking Away from Care. She also delivered Murder in the Car Park, The Unremembered: Britain’s Forgotten War Heroes and co-commissioned The Big Narstie Show.

“It’s a huge privilege to be leading our Specialist Factual output – it’s a department which has delivered some of Channel 4’s most original, controversial and innovative programmes”, commented Shaminder Nahal. “There isn’t a better time to be taking on the most challenging and fascinating stories and questions in history, culture and science in the boldest possible way – and I can’t wait to get going alongside our brilliant production and film-making partners across the UK.”

Shaminder Nahal will report to Louisa Compton, Head of News and Current Affairs, Sport and Specialist Factual, who added: “Shaminder Nahal has proved herself to be a first class commissioner of Specialist Factual programmes and I’m delighted to be working with her towards a new strategy putting SF back at the heart of the Channel with noisy, ambitious and populist commissions.”

“Documentaries and specialist factual programming have always been at the heart of the channel and these two appointments will ensure that Channel 4 remains the home of the most innovative, challenging and popular factual shows around,” commented Ian Katz. “Alisa is an inspirational and mischievous commissioner with a long track record of delivering some of the channel’s most creatively ambitious and successful shows. Shaminder is a brilliantly original and iconoclastic thinker who has been behind some of the channel’s most distinctive and provocative commissions. I have no doubt that both of them will make waves.”