Cambridge-based Vine FX worked on over 1,300 shots from creature animation, environment design to complex CG and FX work on sci-fi drama War of the Worlds Season 3, which premiered on Disney+ on October 19th.

Starring Gabriel Byrne and Léa Drucker, the series picks up on the war between the survivors and aliens as it reaches a new turning point and a terrifying phenomenon grips countless people across the globe.

Here’s what Vine did

“It’s the biggest production we’ve worked on so far,” VFX Supervisor and founder Michael Illingworth says. “The ambition of the show was greater than in previous years and despite the challenges, it was great fun to work on.” Vine FX were given the task to do their take on visual effects for the space environment which included the creation of a photorealistic International Space Station and a black hole hovering over the Earth.

To film the external ISS scenes, the actors were rigged up and puppetered across the set build. This basis was then extended using intricately constructed CG to create mesmerising views of Earth and a full CG ISS, with both a day and night lighting setup. 3D Supervisor, Pedrom Dadgostar conducted extensive research in order to ensure that the ISS, space environment and earth all perpetuated the correct atmosphere, feel and realistic level of detail. In order to tailor the asset for use across multiple sequences, precision and fine-detail was considered at every stage. This included the creation of technically correct aspects and components such as wiring, panels, a full cupola, astronaut visors and tethers for the astronaut’s suit. 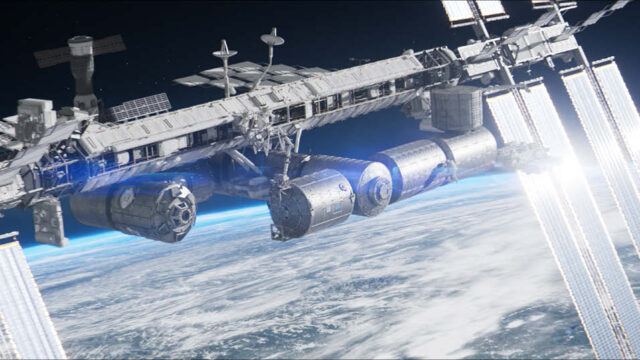 The development of the black hole was overseen for a long period of time and contained pyro simulations inspired by the first-ever released images from the astronomers on the Event Horizon Telescope team. The black hole was also designed to appear as a wormhole for time travelling, which from the other side revealed a spectacular view of a decayed London. Created using a combination of full CG buildings and projected DMP textures; an entire section of the city needed to be faithfully recreated in a beaten and abandoned state, complete with weathered facades and partially submerged vessels in the stagnated Thames.

The environments featured in the show required various set enhancements including CG builds such as the particle accelerator room, an underground train station, a tunnel and parts of ISS interior ceiling that were removed during the shot in order to recreate the ‘floating’ effect across the spaceship. Also, key office locations required green screen replacement with a panoramic day and night time look of London that included the sky ripple effect inherited from the first season. 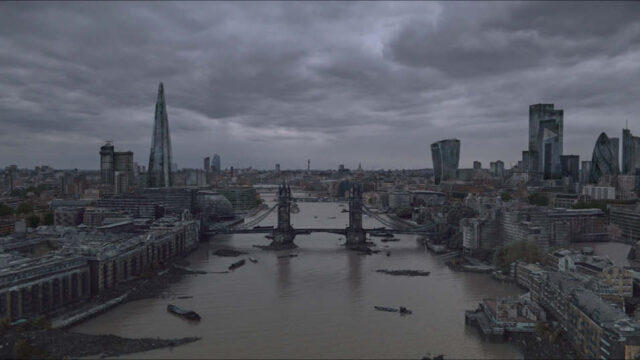 The largest volume of work saw exponential growth within the FX department, which faced a variety of challenges ranging from large flocks of murmurating birds, electromagnetic laser beams, water and fire simulations. The work finished with a epic explosion of the black hole, which not only tears the ISS apart into pieces but also triggers chaos and destruction across Earth.

Vine FX worked with Urban Myth Films Executive Producer Julian Murphy to ensure the visual and graphic effects aligned with the vision for the show. “It’s another collaboration in a wide-ranging success story with Urban Myth Films,” notes Michael. “It’s a very close partnership with a lot of trust and commitment. Vine FX worked within tight parameters – time and money are finite – and, while there was creativity, things were kept as simple as possible”.