Acclaimed independent Cornish horror feature Enys Men, from film-maker Mark Jenkin, was released earlier this month by the BFI. The low budget film was made using Jenkin’s unique workflow and is a masterclass in how to incorporate university learning into hands-on film-making.

The Guardian’s review by Peter Bradshaw describes it as “a supremely disquieting study of solitude….Jenkin’s style is so unusual, so unadorned, it feels almost like a manuscript culture of cinema. There is real artistry in it.” John Nugent at Empire magazine describes him as “one of the most exciting cinematic voices in the UK right.”

Enys Men is pronounced ‘mane’ and means stone island in Cornish. Menhirs, or standing stones (from the Cornish for long stone) are monumental stones, prolific across Cornwall, typically dating from the Bronze Age.

Set in 1973, the horror story unfolds on an uninhabited island off the Cornish coast. A wildlife volunteer’s daily observations of a rare flower take a dark turn into the strange and metaphysical, forcing both her and viewers to question what is real and what is nightmare. Is the landscape not only alive but sentient?

Shot by Jenkin on grainy 16mm colour film stock and using his trademark post-synched sound, the form is designed to feel both innovative and authentic to the period.

Jenkin and Monk build their crew from regular collaborators who live and work in Cornwall, and this team also comprised a number of students, graduates and staff from Falmouth University, working as core parts of the film crew during the shoot in West Cornwall in the spring of 2021 and later post-production, the film having been mixed by School of Film & Television lecturer Rich Butler in Falmouth’s own dubbing theatre.

Ella Turner, who worked as a production coordinator on the shoot and herself a graduate from Falmouth, explains: “The students showed their hard work and keenness to learn right from day one, using their initiative throughout the shoot, fitting in with all departments and always ready to help out. I loved working with the team, it’s so relieving when you can rely on someone to get on with things.”

Kingsley Marshall, head of Film & Television at Falmouth, who worked as an executive producer of the film, describes the impact for students: “The Sound/Image Cinema Lab embeds real experiences for students into their time at the university. It helps that many of our partners work with students in the university, and Mark and Denzil are no exception – totally integrating the students into their crew and helping them build their confidence in the practical application of filmmaking.

“We’ve been involving students in feature film production for over a decade now but seeing students working in all weathers on remote locations is a privilege to be able to offer, and extremely rewarding for those involved. Many of these students were second year undergraduates at the time – and we can see the impact on their learning and the ambition of their own practice when they move into the third year, and after graduation – where those involved have moved immediately into roles within the film and television industries.” 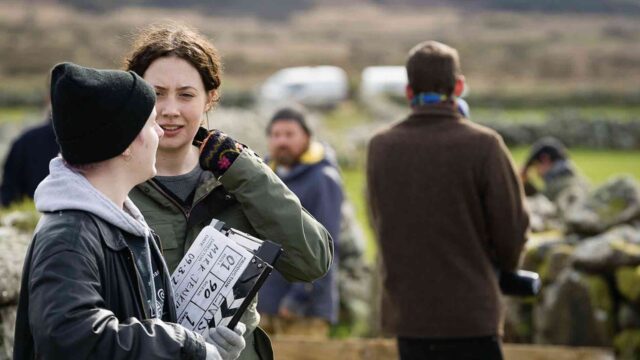 Mary Woodvine (Poldark, Judge John Deed), who played Sandra in Bait, plays the volunteer in Enys Men. She reunites with Bait co-star Edward Rowe (The Witcher, House of the Dragon) who is the boatman. Based in West Cornwall, and previously working in theatre, film and television for over 30 years, Woodvine is in almost every scene of the film and works with minimal dialogue and with the camera following her in extreme close-up.

Mark Jenkin is based in a studio in Newlyn, West Cornwall where he writes, edits and scores his films himself. His debut feature Bait was released in the UK by BFI Distribution, becoming an arthouse hit, eventually screening at hundreds of cinemas and taking over half a million at the UK box office. Mark Jenkin and his producers, Linn Waite and Kate Byers, won the BAFTA for outstanding debut by a writer, producer or director.

Enys Men was conceived as a similar low budget production. Film4 persuaded him to accept backing in 2020, with Film4 head of development Ben Coren and senior commissioning executive Lauren Dark insisting that he would not have to give up significant control.

Lockdown came before production started, stalling the production, but giving Jenkin the opportunity to do a major rewrite of the script.

Speaking on The Film Makers Podcast podcast earlier this month, Jenkin shared the story of how his approach to film-making was born out of his re-found love of the craft. He started at sixth form college in the ’80s, developing stills photography, then shooting on Super8 in the 90s, before later becoming disillusioned. During a period recuperating after a minor operation, he watched and rewatched Mark Cousins’ 15-episode 2011 documentary, The Story of Film: An Odyssey. “I bought a Super 8 camera and a roll of film and retraced my steps.”

Jenkin’s low budget “new, old formalist approach”  involves minimal rehearsal time and minimal crew and equipment. The production vehicles for Enys Men comprised a transit, another van and a hatchback with a wheelbarrow for his kit, plus a 4×4 for the catering. The crew averaged around 12 on any shoot day, with several days when Jenkin went out single-handed to pick up flora and fauna.

The shoot for Enys Men lasted 21 days during March and April 2021, with the first five or six days doing interiors and then moving outside with rain-free weather, but relentless wind. Whilst there was a shot list for each day, the team worked flexibly to cut back and simplify when time looked to be running out. Lighting cameraman Colin Holt’s background in newsgathering fed into this pragmatic approach.

Most edit decisions were made on the shoot. “It has to be then because that’s when everyone’ s creative energy is focused – during the shoot,” says Jenkin on The Film Makers Podcast. On the odd occasion when they hadn’t captured footage to plan, he was forced to go into improvisation mode in post-production.

For Enys Men, all rushes were processed by Kodak Film lab at Pinewood and then scanned by Digital Orchard on its Scanity 4k HDR.

The retro ‘70s look and feel of Enys Men features popping reds and yellows, which Jenkin describes as ‘disturbing colours.’

No sound is recorded on set, with Jenkin relying on post synch for audio. “For me going into the edit with total silence is a brilliant starting point,” he says. It’s both a budgetary and creative choice, with no attempt at realism.

For sound effects, Jenkin used a synthesizer, wired up to a tape loop, which created echoes and sound distortions. He stood on a piece of fake wooden flooring to record footsteps.

Jenkin composed the original score for Enys Men, which – like his soundtrack for Bait – will be released by Invada Records. The soundtrack also features Kan Me written and performed by Gwenno especially for the film. Sung in Cornish, this haunting track (May Song in English) appears on Gwenno’s album Tresor (Heavenly) which was released in July and is nominated for the 2022 Mercury Prize.

In April 2023 Enys Men will be released on BFI Blu-ray/DVD (Dual Format Edition) with contextual extras and on BFI Player where it will join Bait and a selection of Jenkin’s early work. Sales are through Protagonist Pictures. 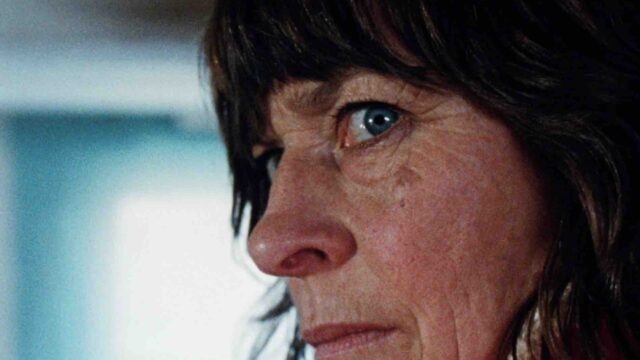 You can find out more about how Falmouth University supports independent cinema through its Sound/ Image CinemaLab here.

In Televisual’s Winter issue, we asked four of the best Directors of Photography in the industry right now about the art and craft of high-end TV and film cinematography. In the third of the series, here’s the >>>
Prev Post
Next Post
This website uses cookies to improve your experience. We'll assume you're ok with this. I've read this
Privacy & Cookies Policy