Bristol-based VFX studio Lux Aeterna worked on over 700 shots, from the universe’s birth to real-life wildlife footage, for the BBC Studios Science Unit-produced Our Universe, which premiered on Netflix last year.

Narrated by Hollywood actor Morgan Freeman, the series takes viewers on a journey to discover how all the ingredients of life ended up on Earth. In episode three, titled “Turning Seasons,” the focus is on the journey of an Alaskan Peninsular brown bear through the Earth’s seasonal cycle, amid the frigid winter months and into the warmth of summer.

Here’s how Lux Aeterna and director/producer Stephen Cooter used a mixture of real-life, virtual and computer-generated footage to capture these scenes:

“Netflix and BBC Studios rightly set the bar very high for this ambitious new series that connects major events in the universe’s history with the survival of six iconic animals on our planet today,” says Our Universe Showrunner Mike Davies. “A level of cinematic photorealism was required with each episode requiring its own distinctive look, whilst needing to feel unified and in harmony with the rest of the series.”

This brief is something Cooter, who directed two of the show’s six episodes, took to heart. Taking his reference points more from the films of Steven Spielberg and J.J. Abrams than traditional wildlife documentaries, he collaborated with directors Alice Jones and Naomi Austin to achieve the overall look of the programme. 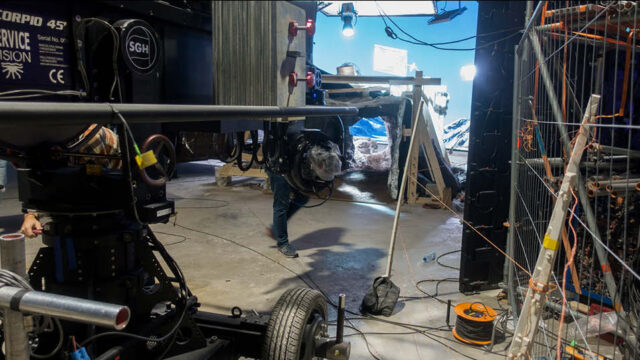 “We knew that it wasn’t a standard space or wildlife documentary and that we needed to tie together those two elements with a cinematic look, centred around the animals as ‘lead characters’,” he says. “We decided early on that we wanted to shoot the whole show in a widescreen 2.39:1 ratio. Our go-to setup was Atlas Orion series anamorphic lenses, with a RED Gemini camera, while other camera and lens set-ups were used across the series including the Arri Alexa LF and Panavision G Series anamorphic lenses. The anamorphic lenses enabled us to tie together the two strands of the show, as we were able to replicate the anamorphic flares that appeared in the natural history shots, in the VFX sequences.”

To complement the shots of the bears captured on location in Alaska, a studio shoot in Hungary was set up to illustrate the animal settling down to hibernate in response to the planet’s yearly journey through space. These moments of connection between animals and the universe were crucial to the series’ storytelling but difficult and potentially dangerous to shoot in the wild. Therefore an innovative ‘virtual production’ approach was required. A bear cave was constructed by set builders BK Filmstudio and the shots were captured using a technocrane against an LED screen showing the mountain backdrop. The young male European brown bear called Koda was provided by the professional animal training firm Horkai, which worked in tandem with a UK-based animal consultant, to ensure that Koda was well cared for and best practices followed throughout the shoot.

“Getting the camera so close to the bear and being able to move and drift it on the crane added so much to the shots,” says Stephen. “DoP Paul O’Callaghan chose to shoot with the Sony Venice because its high base ISO was perfect for shooting in the low light conditions we needed within the cave for the bear to fall asleep. To achieve the series look we paired the Venice with vintage Hawk anamorphic primes and a Cooke anamorphic zoom”. 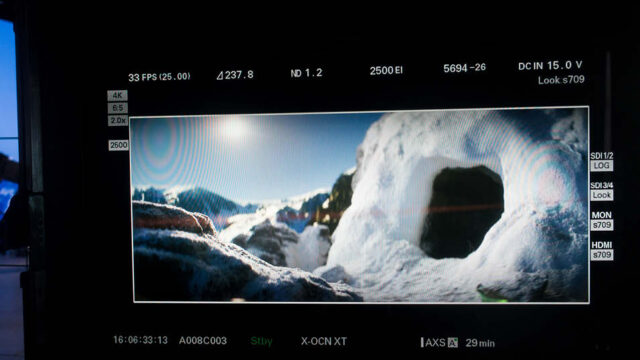 Supervising such a technically complex shot, Rob Hifle, Lux Aeterna Creative Director, was able to give instant feedback on incorporating the post process, including VFX removals for any safety equipment required to contain the bear. The virtual wall technology enabled instant adjustments to the backdrop and lit the subject, bedding it into the scene in a way that is not possible with a green screen, producing a VFX shot largely in-camera with only minimal work required in post. The result was that a potentially risky and time-consuming shoot was suddenly streamlined and revolutionised by virtual technology, providing a seamless final product.

Cooter said: “Having a VFX supervisor on location is incredibly helpful because you have someone there that can say ‘yes, you’ve got it’, or ‘no you haven’t.’ Being able to ask if any potential issues can be fixed in post completely streamlines the process, enabling us to make decisions in real time. We reached the heart of the story we were trying to tell quicker, rather than spending time trying to fix things easily handled later.” 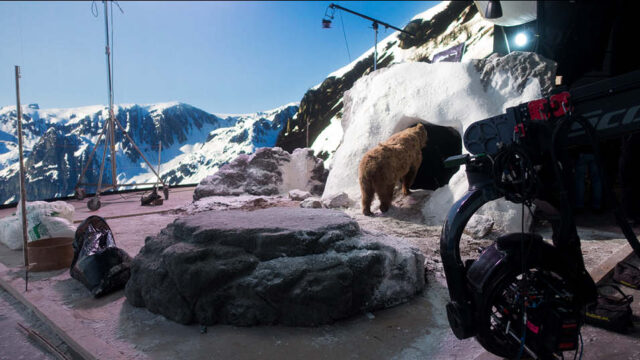 “We pride ourselves on building close relationships with clients, and with directors and producers, from an early stage,” says Paul Silcox, VFX Director at Lux Aeterna and VFX Supervisor on Our Universe. “We’re there to help them to realise their vision, and bring a compelling story to the screen with cutting-edge visuals. The support and encouragement we had from both Netflix and BBC Studios were instrumental in us successfully delivering the VFX for Our Universe.”