Apple TV+ spliced the talents of producer John Favreau, the BBC’s NHU and MPC to bring dinosaurs back to life for Prehistoric Planet. Pippa Considine reports

“We’re using all of the tools and techniques that the BBC documentary filmmakers have honed over decades,” says Favreau. “Then we’re using CGI to create the most naturalistic possible dinosaurs set in a photo-real world that is as close as we can possibly get to the real landscape these dinosaurs would have inhabited.”

The commission came just two months after the launch of Apple’s streaming service in 2019. For the tech giant, it was a perfect mix of cutting-edge filmmaking, with natural history’s universal appeal. And the project needed deep pockets: the undisclosed budget might not run to Lion King’s US$260m, but it covered multi-territory shoots and the creation of hundreds of creatures. 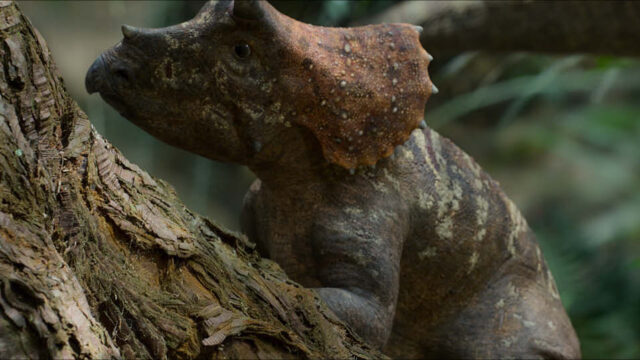 Gunton and Favreau were introduced by Jay Hunt, European creative director for Worldwide Video at Apple. Gunton talked about his idea for a show that took the format of Planet Earth and time-travelled 66 million years, to the time of the dinosaurs. “We were both in the same world and we thought: we’re off. We’ve got to do this together,” says Gunton.

The five 40-minute episodes, which launched across five evenings at the end of May, each present a different habitat: forests, deserts, ice worlds, freshwater and coasts.

New research offered a chance to introduce new dinosaurs and to tell unseen stories, particularly around behaviour. The team drew on a range of expertise from fields including palaeontology, anatomy, behaviour and contemporary biology. Series producer Tim Walker talks one scene where a male and female Tyrannosaurus Rex are flirting. “The analysis of the skull shows that there were a lot of nerve endings that came to the surface, and this means the snouts would have been used for very delicate behaviours, one of which would have been nuzzling.”

Favreau’s long time collaborators Andy Jones and Adam Valdez were series directors, working alongside the BBC NHU team. “It was pretty scary at first to figure out how to do it, but I think we all jumped off a cliff, took a leap of faith together,” says Valdez.

Before the shoot could start, MPC first built the prehistoric worlds, complete with the series’ dinosaur stars, in the game engine. They plotted camera positions and moves.

The environments were shot in the field, to create authentic back plates for the dinosaur action. “It’s filmed in a way which is exactly the same as how we film animals for real, despite those dinosaurs being CG and dropped into that real environment,” says Walker.

Gunton describes the natural history grammar of the show. “You have to resist the temptation to put the camera anywhere because you couldn’t if you were filming it for real…. It’s not a jaws and claws show, it’s much more about the nuances and sophistications of the dinosaurs.” He contrasts the T. rex sequence with a scene featuring a small, feathered dinosaur, the Mononykus. “You can’t get close to a T. rex, but you can get close to a mononykus, so some of the photography reflects that.” The close-up approach includes a remote camera perspective, as though a camera was hidden in a log containing the Mononykus’ wormy prey.

Despite lockdown, the team found suitable locations to stand in for the late Cretaceous era. The film makers didn’t need to capture animals, but the shoots had their own challenges. In Namibia, they needed one shot as the scene for a large gathering of huge dinosaurs. “The space required to put them had to be vast,” explains Walker. When the producer finally found a location “they had to get the camera position, get all of the reference material …and then retreat back over a quarter of a mile over steep sand dunes to be able to get the dinosaurs in focus in the lens.”

On location, they used Red Monstro cameras, shooting in 8K (for 4K transmission), and a full frame sensor, usually a Helium Super 35, the first time it had been used in natural history film making. This gave them great image quality and data set, capturing large frames where they could zoom in later. For slow motion and time lapse, there were Phantom cameras. And to get right inside a habitat, there was the Laowa macro probe lens, also used in keyhole surgery. DJI drones were another essential.

The teams on location were small, but critically they included MPC visual effects crew, who taught natural history filmmakers to use LIDAR scanners to ensure correct scaling. Basic dinosaur models, or cut outs, were placed in the real environment and, when this wasn’t possible, they used long boom polls or flew drones to capture the eyeline. HDRIs were also critical for lighting, so that conditions could be replicated in CG. On set, the vfx team might need two HDRI’s for a day’s shoot, but the constantly moving natural light changed the game, needing closer to 150. 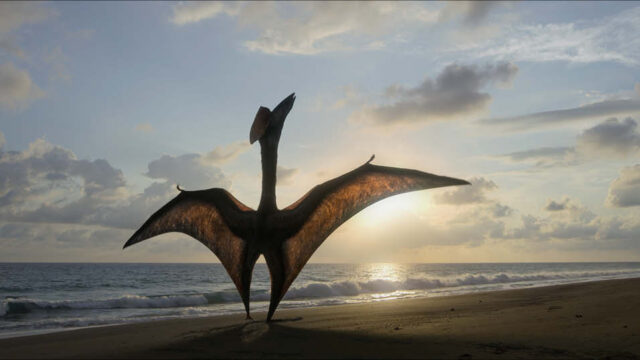 Meanwhile, the dinosaurs were brought to life back in London’s Soho. Elliot Newman, vfx supervisor at MPC, explains the detailed attention required by the animators, getting to grips with anatomy, “the skeletal part of it, the muscles, how skin slides on top of muscles.” On top of this physical understanding, it was important to bring a little magic, for each creature to have a personality. Newman describes “a selection process in terms of the puppetry and the controls of that character to really help define how a leg, or tail should move…. The rig would drive a lot of that, but obviously the animation team would provide the nuances of that animation performance as well.” Sharing the visualisation with the natural history team, “was a kind of feedback loop.”

Prehistoric Planet didn’t just rely on film titans for the visuals, the music was composed by Hans Zimmer and Bleeding Fingers Music. Alongside conventional instruments, the composer fashioned their own. Antlers, bones, giant eggs and slabs of 200-million-year-old petrified wood were used to make bone cellos, bone violins, ostrich egg flutes and a fossil xylophone.

Sound gathering for the project was extensive, while created sounds were meticulously invented. “You have to extrapolate what their soft tissue structure would be and if sound echoes through different cavities within the skeleton,” says Favreau.

“The last piece of the puzzle that came together was the narration,” says Favreau. Gunton has worked across the years with Attenborough; for Favreau, it was a first.  “When his voice came on, it just hit a different part of my brain and all of a sudden there was a feeling… I didn’t realise I associated so much with this man.”

Behind The Scenes07.02.23
BTS: Nineteentwenty's vfx for Ford Ranger

Here’s the vfx breakdown for nineteentwenty’s work on the new Ford Ranger ‘Go Break It In’ ad featuring a quarry explosion. Shot in a Quarry In Slovenia the nineteentwenty team was tasked with creating an explosion behind >>>

Students at the National Film and Television School (NFTS) recently completed a new short film, where they adopted Virtual Production techniques for the first time. Reality Heist is a five-minute original story of a scientist who finds >>>
Prev Post
Next Post
This website uses cookies to improve your experience. We'll assume you're ok with this. I've read this
Privacy & Cookies Policy