Adults in the UK spent a third of their time watching TV and online video in 2020, according to Ofcom’s annual study of the nation’s media habits.

And while traditional broadcast TV increased over the period, this was down to the over 45s watching more with 16-24-year-olds’ broadcast TV viewing dropping again.

Ofcom found that during various lockdown restrictions, people spent a daily average of five hours and 40 minutes viewing – 47 minutes more than in 2019. 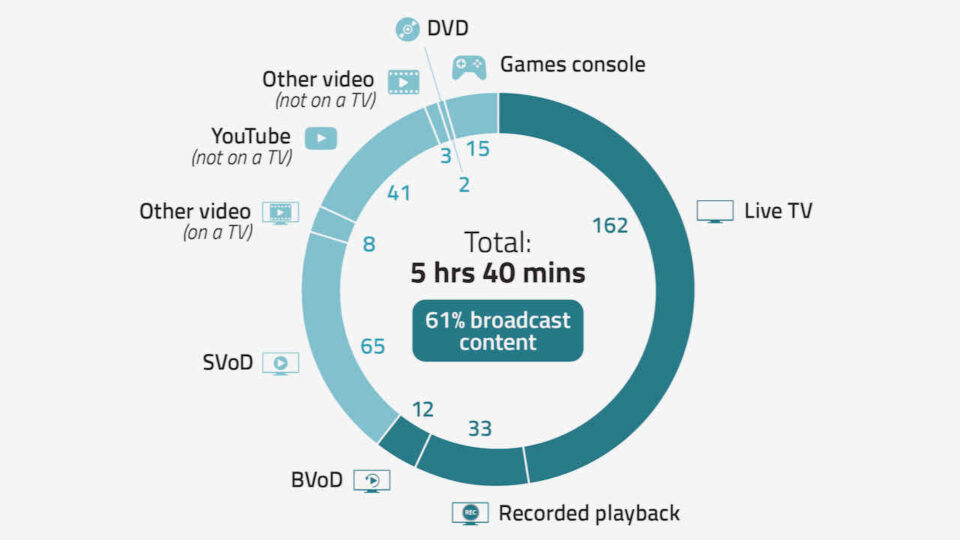 Viewing for all UK adults

The change was mainly driven by people spending almost twice as much time watching subscription streaming services (one hour and five minutes per day) such as Netflix, Amazon Prime Video and Disney+.

UK subscriptions to streaming services climbed to 31 million last year, up from 20 million in 2019. By September 2020, three in every five UK homes were signed up, compared to half of homes a year earlier.

By April 2021, streaming service providers were offering UK viewers a combined total of over 115,000 hours of content. Amazon Prime video’s catalogue was the largest at over 41,000 hours, followed by Netflix at around 38,000. The combined content catalogues of All 4, BBC iPlayer, ITV Hub and My5 were narrowly short of this, at 37,000 hours.

Twenty-nine of the 30 most-watched titles on subscription services in the first quarter of 2021 were on Netflix. Four of these were UK-produced – Bridgerton, The Dig, Behind her Eyes and Fate: The Wynx Saga.
Bridgerton was a particular success, with 8.2 million homes watching it by the end of March 2021, making it Netflix’s biggest title that quarter. Netflix subscribers also sought escapism during the winter lockdown by spending almost an hour per day watching comedy programmes – nearly twice as much as a year earlier.

The average time spent watching traditional broadcast TV each day in 2020 was 3 hours 12 minutes – nine minutes higher than in 2019. But this increase was entirely driven by people aged 45 and over.

Younger age groups continued to watch less broadcast TV in 2020. People aged 16 to 24, for example, only spent an hour and 17 minutes watching broadcast content – down four minutes from 2019. 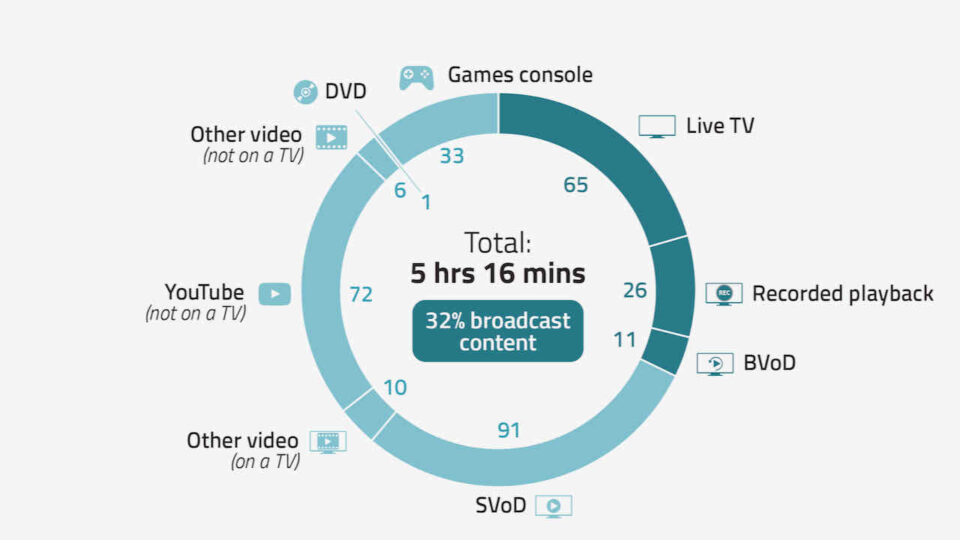 “TV and online video have proved an important antidote to lockdown life, with people spending a third of their waking hours last year glued to screens for news and entertainment.

“The pandemic undoubtedly turbo-charged viewing to streaming services, with three in five UK homes now signed up. But with subscriber growth slowing into 2021 and lockdown restrictions easing, the challenge for the likes of Netflix, Amazon and Disney will be to ensure a healthy pipeline of content and keep customers signed up,” said Yih-Choung Teh, Ofcom’s Group Director, Strategy and Research