1. Revenues for the broadcast TV industry increased by 1.0% to £13.8bn in 2016, according to Ofcom’s 2017 Communications Market Report. Within this, net ad revenue in the traditional TV sector exceeded £4bn for the second consecutive year.

Pay-TV platform operators (Sky UK, Virgin Media, BT TV and TalkTalk TV) increased their revenues by 2.8% in 2016 to £6.4bn, accounting for 46% of broadcast industry revenue. On-demand and streaming services such as Netflix, Amazon Prime and NOW TV are mainly complementary to these traditional pay-TV platforms: 74% of subscribers to on-demand and streaming services also have a pay-TV subscription. 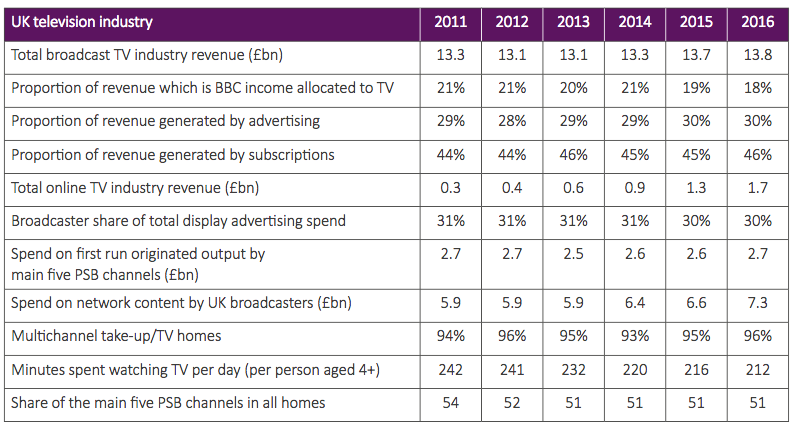 Of the services that require payment (excluding the licence-fee funded iPlayer), Netflix was the most popular among both adults and teens. While 31% of adults claimed to use Netflix, nearly half of all teens said they used it (46%), making it the third most popular on-demand and streaming service overall among that age group.

3. The two leading pure subscription on-demand and streaming services in the UK continued to be Netflix and Amazon Prime in 2016. Netflix had nearly 6.0 million subscribers by the final quarter of the year, according to estimates from Ampere Analysis, with year-on-year growth of 17%. Amazon more than doubled its subscription base over 2016, to an estimated 3.8 million subscribers to Amazon Prime by the end of the year. 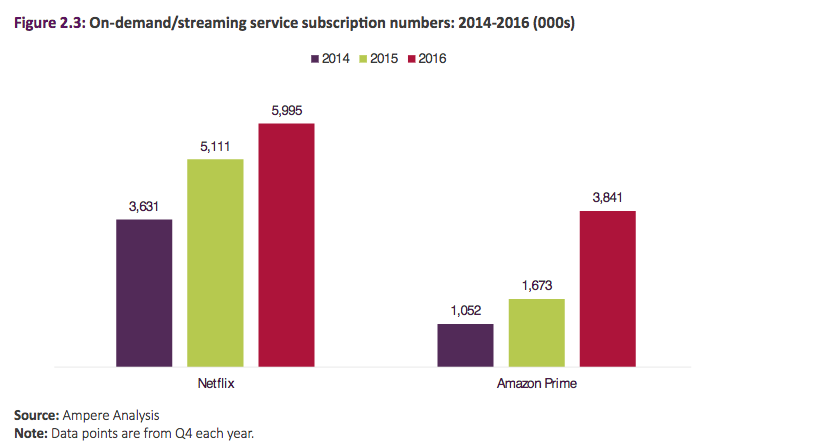 4. The top four most-viewed shows by Netflix, Amazon Prime and NOW TV users in the final three months of 2016 in the UK were all original productions exclusive to either Netflix or Amazon. Orange is the New Black, Marvel’s Luke Cage and Narcos proved popular on Netflix, while Amazon’s The Grand Tour was the third most-watched show over this time period, despite Amazon having considerably fewer users than Netflix. 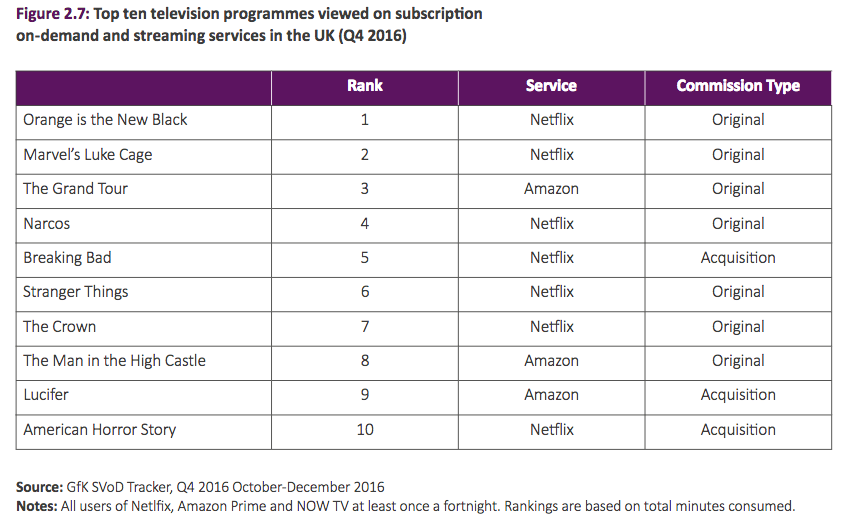 5. Spend in key genres by channels broadcasting in the UK was £7.3bn in 2016, an increase of 11% year on year in real terms. Much of this increase was driven by the 24% rise in spend on sports channels in the multichannel sector. Sports channels accounted for 40% of spend on UK programming, up from 36% in 2015.

The BBC portfolio channels reported a real-terms decrease in spend for the second year running. Some of this may be attributable to BBC Three’s move online in February 2016, which was carried out partly to make broadcast savings. The channel’s budget was reduced from £85m to £25m as part of the move.

Spend on BBC One programming overtook ITV spend in 2016, rising by 10% in real terms after a dip in 2015. ITV’s investment in programming fell by 5% in real terms year on year.
Channel 4, Channel 5, and the commercial PSB portfolio channels, all invested significantly more on programming than in 2015.

Overall spend on first-run UK-originated programming by the main five PSB channels – BBC One, BBC Two, ITV (including ITV Breakfast)/STV/UTV, Channel 4 and Channel 5 – increased by 4% in real terms to £2,708m in 2016. 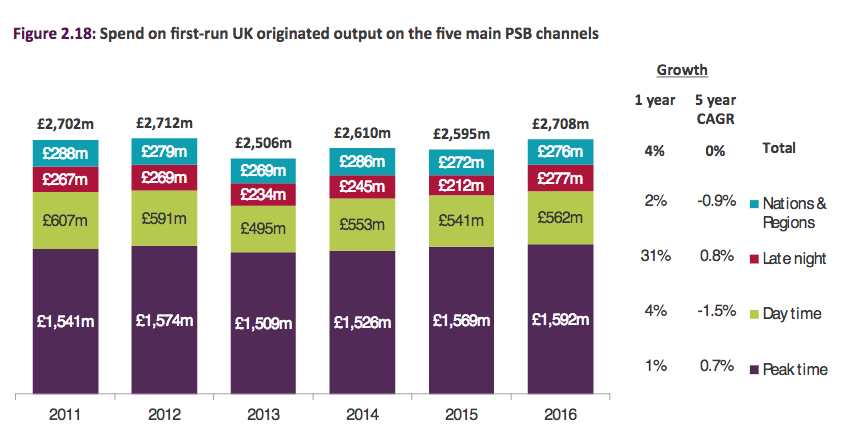